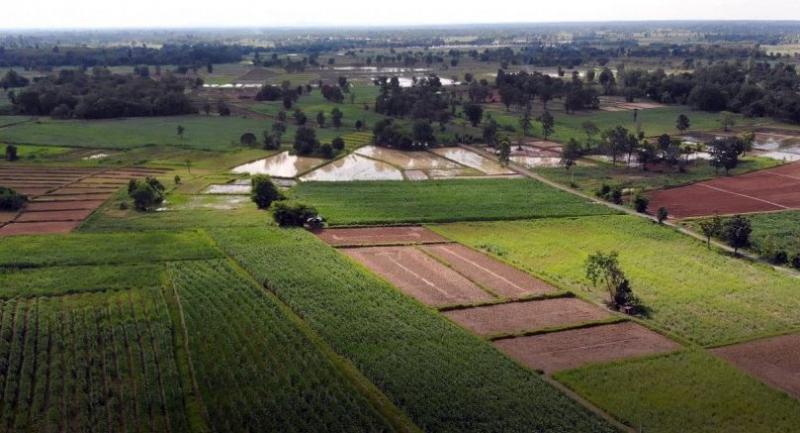 Paddy fields mix with sugarcane plantations, which are more often sprayed with herbicides, in Si Boon Ruang District of Nongbua Lamphu province where a|relatively high number of flesheating disease cases have been detected.

As more and more rice farmers switch to sugarcane, health issues and conflict arise over exposure to excessive chemicals

IN THE PAST few years, the country has seen a big rise in sugarcane plantations, as the government has seriously nudged rice farmers into considering alternative crops in the face of plunging rice prices.

The government policy may, however, have simply led to another big problem. Sugarcane farmers have often used controversial chemical herbicides such as paraquat, which is now blamed for several cases of necrotising fasciitis, commonly known as flesh-eating disease – an infection that results in the death of the body’s soft tissue – and cellulitis, to an excessive level.

Several sugarcane farmers in Nong Bua Lamphu province, for example, have admitted that they use paraquat in amounts far higher than what is recommended on the product label.

“In Tambon Boontan of Nong Bua Lamphu’s Suwannakhuha district, sugarcane farmers have really used a high amount of chemicals,” Assoc Professor Puangrat Kajitvichyanukul from Naresuan University said, citing findings from an ongoing research study. She is a key researcher for the project that aims to determine health and environmental impacts from farm chemicals and encourage organic farming. Across Thailand, about 27 in 100,000 Thais are diagnosed with necrotising fasciitis. But in Nong Bua Lamphu, that rate almost doubles to 49.8 in 100,000.

“There is a link between the use of farm chemicals and flesh-eating diseases,” Puangrat affirmed. According to her, chemicals used at sugarcane plantations have also spread to nearby areas and even to local water sources. Puangrat observed that the Non Sang district of Nong Bua Lamphu has suffered the most from flesh-eating diseases, despite hosting just a little over 10,000 rai (1600 hectares) of sugarcane plantations, because it was in a downstream zone. “We are now in the process of studying whether the contaminated water spread further to Pong River in Khon Kaen and affected more people downstream,” she said. “We will find the answers so as to explore solutions.” Asked about the use of farm chemicals, the village head said, “They are necessary. They save cost and labour.”

Apai Namsom, a farmer in Ban Pho Si Sanga of Nong Bua Lamphu’s Muang district, said he had converted 30 out of 32 rai of his paddy fields into sugarcane plantations in 2010.

“Sugarcane plantations are doing well even when flooded. Buyers come to our plantations to get the crop. We don’t have to go after buyers,” he said.

Since 2010, sugarcane plantations have been growing fast in Ban Pho Si Sanga – from none to about 500 rai now. This is nearly half of the village’s total farmland. The significant growth has a lot to do with government efforts. Since 2010, the government started gearing towards zoning for the country’s agricultural sector with the aim of encouraging farmers to grow crops suitable to their context.

The efforts then gained solid momentum in 2013, with the government officially announcing its “agricultural zoning” policy.

As part of this policy, the government encouraged investments in sugarcane and the sugar industry, as well as the food and energy sectors that have relied on economic crops.

The Office of Cane and Sugar Board, which works under the Industry Ministry, has even come up with the plan to increase the country’s total sugarcane plantation area by 5.54 million rai by 2026 from 10.53 million rai in 2015. The goal for this plan is to boost sugarcane output from 105.96 million tonnes in 2015 to 180 million tonnes by 2026.

Biothai Foundation director Witoon Lianchamroon said the reduction in paddy fields had progressed significantly as efforts to promote alternative crops had received a big boost from the government’s Pracha Rath projects. The government has even offered a Bt2,000 subsidy per rai of paddy fields converted into other types of farmland.

“Among the most promoted alternative crops is sugarcane,” he said. “It should be noted that while palm factories have refused to buy crops from farmers using paraquat, sugar factories have not had such a policy.”

Witoon complained that promoting sugarcane was now hurting the farmers because sugarcane plantations were using a lot of farm chemicals.

“When paraquat for example spreads into the environment, health risks emerge,” Witoon said. There is also an increase in conflicts among people growing different types of crops. Since last year, many rice farmers have lodged complaints with authorities about damage they had suffered from suspected leaks of farm chemicals from nearby sugarcane plantations. “When a storm occurs, it brings harmful chemicals to my paddy fields. Then, plants in my fields wither,” Sayan Pimwong said, as he tried to demand compensation. Jem Tatiwan, 39, said he had lost crops from more than 5 rai of paddy fields as the neighbours kept using chemicals on their sugarcane plantations.

University lecturer Pasakorn Bua-sri, a coordinator and local researcher of the Thailand Research Fund, said he had long worried about conflicts and debts that would arise out of sugarcane plantations.

“And now, conflicts have really happened. Debt issues will follow,” he said, pointing out that sugarcane farmers relied on chemicals and their expenses would be too high for falling sugarcane prices to cover.

But when sugarcane supply rises significantly, it is very likely that sugarcane prices will drop.

This is the second in a three-part series on the health hazards from the use of farm chemicals in Nong Bua Lamphu province. The first report focused on health issues. The third part will focus on organic farming as a sustainable solution.