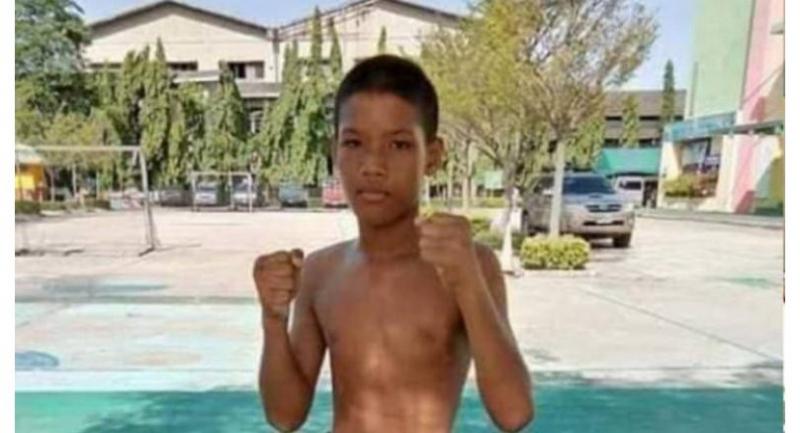 A 13-year-old muay thai fighter died after a taking blow that sent him head first into the ground during a charity match in Samut Prakan on November 10.

The 41-pound fighter “Phetchmongkol Sor Wilaithong”, a Mathayom 1 schoolboy named Anucha Thasako, was knocked out cold in round 3 by his opponent and rushed to the hospital in Phra Pradaeng district.

Diagnosed with a severe intracerebral hemorrhage, Anucha was passed on to the better-equipped Samut Prakan Hospital. But it was too late and the boy died from the injury. A video clip of the child’s final fight was posted and shared online, showing him and his opponent fighting on a stage without protective headgear.

Fighters competed for trophies from Deputy Prime Minister General Prawit Wongsuwan in the charity event, held from November 9-11 as part of an anti-drug campaign.

Anucha, whose parents had died leaving him to stay with his uncle, had been a muay thai fighter since the age of 8 and competed in 170 fights.

The uncle, Damrong Thasako, 48, said the grateful boy had been fighting on stage for money to support his own schooling and also to help out with household expenses.

The boy's death has prompted people in the muay thai circle to hold an auction of muay thai shorts to raise funds for his family.

The death of this muay thai child fighter took place as the National Legislative Assembly (NLA) is poised to pass a draft bill to prohibit children under 12 from muay thai fighting.

Medical professionals support the bill, which would prevent long-lasting brain injuries now suffered by child fighters. Influential people in the muay thai circle object to the bil and have threatened to hold a protest, arguing that a ban would go against a longstanding tradition and affect the income of some deeply impoverished households. This draft amendment to the 1999 Boxing Act would also require older teen fighters to wear protective gear and to be formally registered. It also threatens boxers and referees who rig bouts with up to five years in prison and fines of up to Bt100,000.