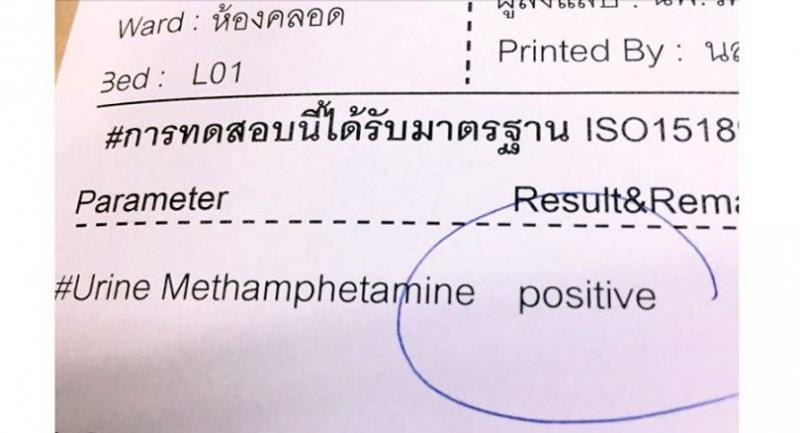 THE DRUGS PROBLEM in Khon Kaen province has escalated to the point where a six-year-old boy recently needed psychiatric care at a local hospital after being allegedly fed with methamphetamine pills diluted in water for a drugs run by his addict father.

A doctor in Kra Nuan district also said in a post to Facebook on Monday that as many as 10 pregnant women had used methamphetamine pills in the mistaken belief this would enable them to give birth more easily.

The unnamed doctor’s boss said later that the number of drug-abusing pregnant women was “less than 10” but agreed the story of the six-year-old boy being fed meth was not far-fetched.

The boy’s grandmother had taken him to hospital to get treated after catching him threatening to set fire to their house, the unnamed doctor at Somdej Phra Yupparaj Kra Nuan Hospital said. The grandmother, who sought a medical certificate for the boy to undergo further psychiatric treatment, reportedly told the doctor that the boy’s drug addict father had diluted meth in water and given the solution to the boy in order to keep him drug dependent so the boy will go deliver the drugs as the father ordered. The doctor wrote that, from his observation, the boy was anxious, struggling to pay attention, suffering from a lack of hygiene, avoiding eye contact, apparently suffering from malnutrition. He said that the child’s seven-year-old brother was displaying similar symptoms. “So a six-year-old is serving as a drug delivery boy, isn’t it time for us to seriously tackle this escalating drug problem?” the doctor asked.

The Somdej Phra Yupparaj Kra Nuan Hospital director, Dr Wiroj Lertpongpipat, told The Nation he had not been aware of his subordinate’s Facebook posts about the six-year-old boy’s plight. However, he believed all areas had drug problems and that was why the Public Health Ministry had campaigned for public awareness about it and to get addicts into rehabilitation programmes, so the tale of the boy being plied with drugs was possible.

The hospital director also commented on the earlier claim by the same unnamed doctor that he had detected the 10th case of a mother-to-be taking methamphetamine just three months into her pregnancy, mistakenly thinking this would help her deliver more easily.

In the latest such case a child was found to weigh only 2.39 kilograms, much lighter than the standard 3kg, the doctor had written. He also said he would like government agencies to launch awareness campaigns to warn mothers of the danger of abusing meth during pregnancy.

The hospital director said that he had talked with the doctor, who confirmed that two meth-abusing pregnant women had told him of their beliefs that meth could enable easier childbirth.

“But these two women were addicts before they got pregnant and continued to be so during the pregnancy – they were not just taking the habit recently for that reason,” Wiroj said. He also said the hospital found six pregnant women had tested positive for meth abuse – three had already given birth and had also entered a drug rehabilitation programme. The six women and their children were safe and generally healthy, Wiroj added. Meth use during pregnancy is associated with numerous problems for mother and child. It increases the risk of low birth weight, a small head circumference, plus problems related to the heart and the body’s neurological development.

The children exposed to meth during pregnancy also had a greater risk later in life of having a shorter attention span, inferior visual motor integration, a lesser verbal memory and shorter long-term spatial memory.