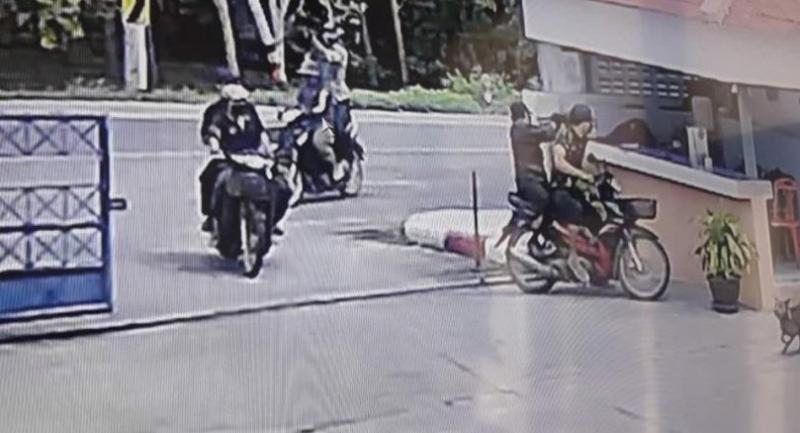 Photo capture from video footage of the attack

A transfer order has been issued for the police commander of a precinct in the southernmost province of Pattani for negligence following an attack by suspected insurgents on Sunday on his station, which resulted in the death of a police sergeant.

“The transfer followed what is described as Ampai’s negligence in overseeing the police station,” he told reporters.

On Sunday, six men on three motorcycles approached the police station at about noon before launching an attack on the building, starting at the entrance by firing war weapons.

The slain police sergeant, Chalermpon Komkham, 33, who was manning the entrance booth of the station, was hit in the body several times by the assailants’ gunfire.

He was later pronounced dead at a nearby hospital.

Spent cartridges from AK-47 and M-16 rifles were found at the scene of the attack.

Piya said the Royal Thai Police would take care of Chalermpon’s funeral and pay compensation to his family.

Police have not yet concluded which group of militants was behind the attack, he added.

The spokesman revealed that both the prime minister and defence minister had expressed their worries about the continuation of violence in the deep South, and had ordered the strengthening of security in the troubled region, as well as the need to stay abreast of any movements by militant groups.

The public have been urged to report to the authorities any suspicious movements or information, such as stolen vehicles that could be used in further attacks, Piya said.