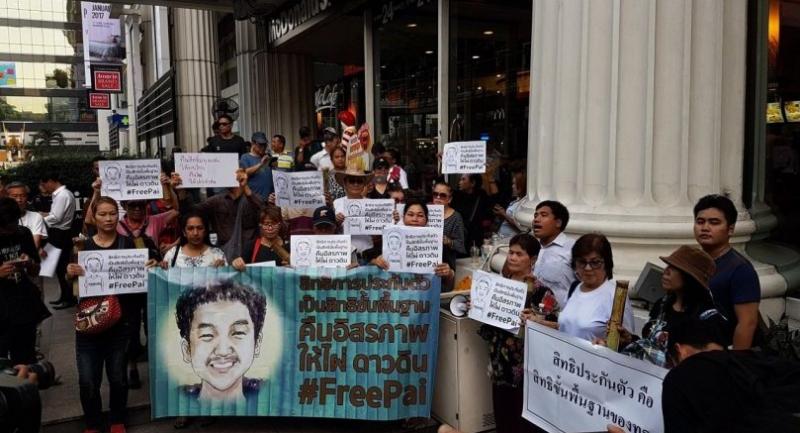 Demonstrators at a venue near Ratchaprasong Junction show solidarity with Jatupat

THE RIGHTS and Liberties Protection Department has sought permission with Khon Kaen University to allow pro-rights and democracy student activist Jatupat Boonphatraksa to sit his exams in prison after the court rejected his latest bail application.

Jatupat’s lawyer, Pawinee Chumsri, said concerned authorities had concluded that the activist, also known as Pai Daodin, could take his exams in prison at the end of this month and next month.

Jatupat needs to appear for his computer exam to graduate from the university. One examination, at the end of this month, would be a written test while next month he would have to take an operational test for which the activist would need to have access to a computer.

Earlier, it was reported that Jatupat’s school – the Faculty of Law – would arrange for him to take the exams in prison on Tuesday and Wednesday if his bail plea was rejected by the court. However, dean of the faculty Kiitibodi Yaipool denied the reports.

The dean said that he had visited the student activist in prison only to discuss a school issue and had suggested to him that he appeal to the university to hold a special exam for him.

Jatupat is the only person charged with a violation of the lese majeste law and the Computer Crime Act, in early December, for sharing a BBC Thai article about the monarchy on his Facebook page. More than 2,000 others had also shared the same article. He was initially released on Bt400,000 bail.

A Khon Kaen police officer later filed a petition with the court, saying Jatupat continued to incite the public on social media and he could tamper with evidence if he were to remain free. Further posts on his Facebook page while on bail were seen to have ridiculed authorities.

The court cancelled the bail, saying he had violated the bail agreement. The Appeal Court upheld the first court’s ruling and the Supreme Court later upheld rulings by both courts.

Earlier this month, Jatupat’s legal team made another attempt to secure bail but the application was rejected.

Fellow activists and Jatupat’s family were worried that he would not be able to graduate this year, as the final examination was scheduled for this month while he was still in jail.

Yesterday’s protest included a small political speech calling for Jatupat’s release. The demonstrators also held banners that read “Free Pai” and showed messages of his right to get bail.

Dozens of police officers were deployed at the demonstration, which was held at the skywalk near Ratchaprasong Junction.

Pro-democracy activists also showed solidarity with Jatupat on social media using the hashtag #FreePai, calling on the authorities to release him on bail so that the activist could take his final examination.

International rights organisations, including the Office of the United Nations High Commissioner for Human Rights, urged the government to review cases of all individuals charged with lese majeste and requested Jatupat’s release on bail so that he could take his examination at Khon Kaen University.