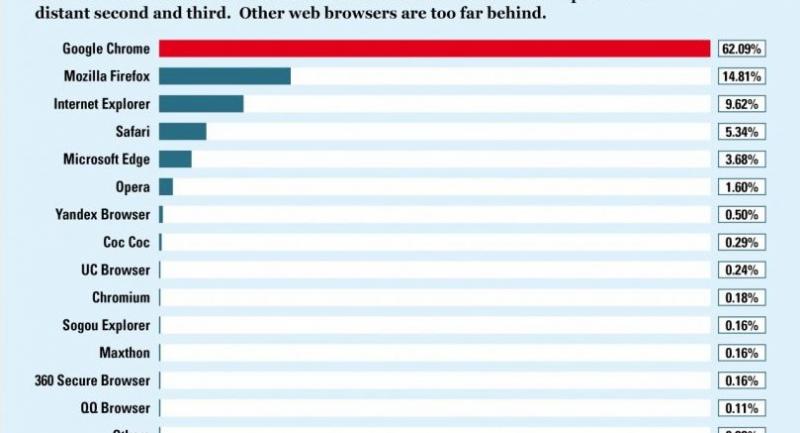 Google chrome remains the most popular browser in the world

Mozilla and one time- market leader Microsoft Windows’ Internet Explorer are distant second and third popular browsers. Other web browsers are too far behind, according to data collected by StatCounter, a Dublin-based web analytics firm.

Microsoft launched Internet Explorer in 1995 and soon it became the most widely used web browsers on the internet, as it attained about 95% browser usage share in early 2000.

Come 2008 and Google launched Chrome in the market. It made a steady progress. Things changed by 2012 when Internet Explorer dropped by 2 percentage points to 41.4 per cent of global browser user share.

Chrome jumped by 2.6 per cent to 41.7 per cent.  Today Chrome is the most popular browser in the world easily outperforming the likes of Internet Explorer and Mozilla Firefox.  The advent of Chrome signalled trouble for all other browsers.  Today 62.09% of web surfers use Chrome.

The security scare in the Internet Explorer helped kick-start Mozilla as it offered a secure alternative to the web users. While the Firefox revolution caught up for some time, today Mozilla Firefox has lost the popularity with only 14.81% of users. While initially it gave run to Internet Explorer, it couldn’t hold to the browser market and dropped by 9.8% by NetMarket Share’s count.

Although Safari was unveiled before Chrome and it was said to be the fastest browser for both Macs and PCs, it didn’t take off like Chrome did. The reasons for the less usability of the browser are ascribed to practical performance. With the plentiful extensions and the scope of having a dozen tabs open, Chrome nudged Safari out of its way to march ahead. Today Safari enjoys a user popularity of just 5.34%.

Browsers like Opera have user percentage of around 1%. The somewhat complicated context menu with a lot of options makes Opera user unfriendly and thus an unpopular browser.