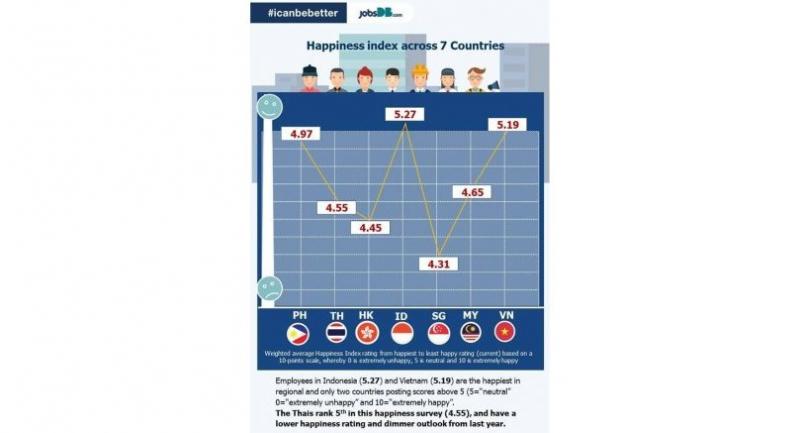 In its “2017 Happiness Index Report” released this week, jobsDB (Thailand) said the three key factors in keeping employees content were convenience in their work location, their employer’s reputation, and their relationships with colleagues.

In a survey of 1,108 workers, 60 per cent of respondents said they were happy with their work, for an average ranking of 4.55 points on the “happiness index”.

In Thailand, the least happy workers were fresh graduates and employees with less than a year’s experience, together scoring 4.35 points, followed by people with 1-4 years’ experience at 4.45 points.

Top executives scored best, with an average of 5.19 points, while managers averaged 4.64 and supervisors 4.54.

Asked what would make them happier in the next six months, 37 per cent of the Thai respondents hoped for better opportunities and jobs elsewhere, 20 per cent were prepared to remain with their current job if they got a raise, and 8 per cent wanted more recognition or a promotion.

In the past, workers tended to prioritise job security, but now there is more ambition to rise to the executive level.

Younger employees put a high premium on “inspiration” as a factor in choosing which company to join. They’re not afraid of leaving their comfort zone.

However, both generations share keen interest in having a convenient work location, a company with a good reputation and good rapport with colleagues.

The factors that most make them want to quit are working with inefficient executives, chances elsewhere to advance in their careers and lacking challenges in the development of work skills.

Changes affecting the workforce in the past year have included the growth of the ageing society, robotics and AI technology, and startups attracting younger people who prefer to be self-employed.

The survey revealed that the key elements in retaining employees are to offer support and encouragement to enhance their capabilities, provide opportunities for career growth, and be able to see them as competent and successful role models.