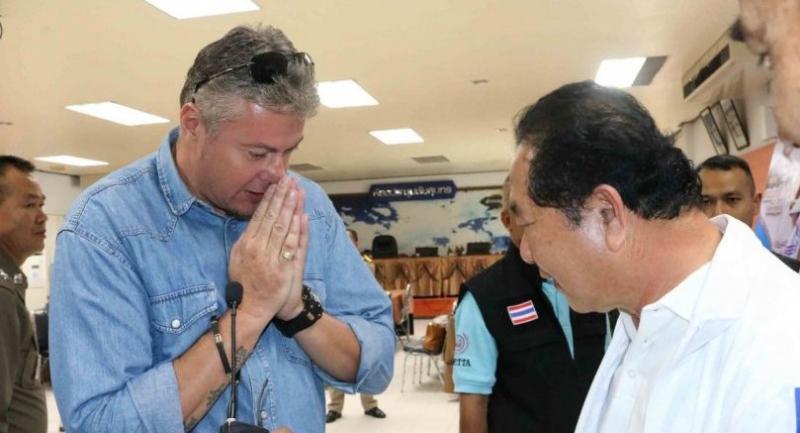 A 54-year-old Slovenian man staying in Kalasin’s Mueang district found himself in trouble with the authorities at the weekend for slashing eight election campaign posters after his Thai girlfriend had missed their Valentine’s Day dinner date, during which he planned to ask her to marry him, in order to canvass for an election candidate. Suspect Zvonimir Nard (not official spelling) was arrested at a rented apartment room after CCTV footage from the Soi Pimpanit Pattana area captured a motorcycle-riding foreigner who resembled him destroying an election poster on the night of February 16, Kalasin Governor Kraisorn Kongchalard said at a police press conference on Monday.

After his arrest, during which police confiscated the knife he had used in the act of vandalism, the Slovenian initially confessed that he, in a drunken state, had used a knife to destroy eight posters of the Palang Pracharath Party candidate for Kalasin’s Constituency 1, Chalong Maralert, including a poster in which Chalong was photographed with PM General Prayut Chan-o-cha.

The prime minister’s forehead in the poster also had a hole in it, similar to that of a gunshot wound, but it turned out to have been caused by someone hurling a rock at the poster, the press conference was told. The suspect claimed he had been angry that his girlfriend, who was part of the canvassing team for Chalong, was occupied with work on Valentine’s Day and therefore missed the dinner date with him.

He was particularly enraged because he had planned to give her a present and ask her to marry him during the dinner.

On Saturday, after trying unsuccessfully to contact her by phone and look for her, he got drunk and decided to ride off on a motorcycle to destroy the posters, in order to vent his anger. The man was initially charged with damaging property but, when the owner of the property dropped the complaint after learning what had caused the act of vandalism, police gave him a warning and released him.

During the press conference, the Slovenian showed up with a garland to apologise to Chalong, who then said he forgave the foreigner.