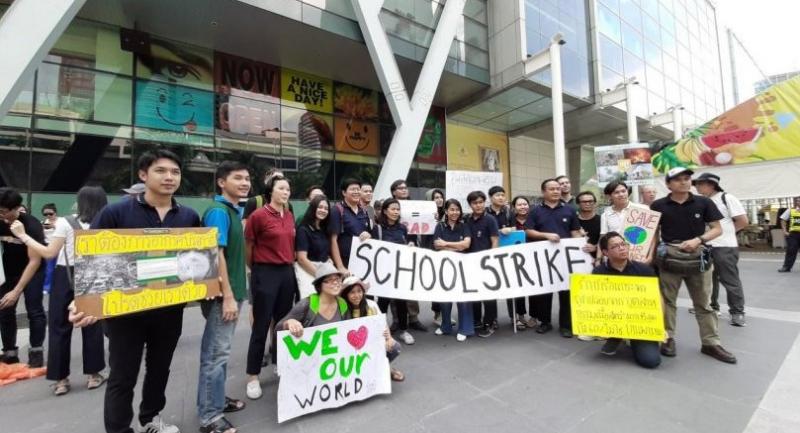 Environmentally concerned citizens in Thailand joined climate activists across the world on Friday to campaign for urgent solutions to climate change.

More than 100 people took part in “Climate Strike Bangkok” in downtown Bangkok as part of the larger campaign “Global Climate Strike For Future”, which were simultaneously held in 2,350 cities in 25 countries across the world on Friday.

The goal was to collectively call on the world’s governments, business sectors, and the wider public to seriously tackle climate change and preserve a healthy environment for future generations.

Many of the strikers in Bangkok carried banners as they marched for 6 kilometres from the National Stadium to the Central World complex at Rajprasaong Intersection.

The group demanded that the Thai government and corporations take legal action and measurable steps to address climate change and also create awareness and encourage individuals to switch to a more sustainable lifestyle.

The goal of the efforts is to stabilise global warming and keep the global temperature from rising beyond 1.5 degrees Celsius as per the Paris Agreement.

Tita Phairaksa, one of the activists, said she joined the movement because she wanted to highlight the significant but largely ignored impact of the meat industry on global warming.

“Many scientific studies have found that the global meat industry was responsible for up to 60 per cent of overall greenhouse gas emission from human activities, larger than the entire energy sector, thus we can say that the meat industry is the biggest factor behind the even more extreme climate change,” Tita said.

“However, most people, as well as the authorities and mainstream media, are still not yet realising this important fact. I think by raising the banners about the impact of the meat industry to our climate system at the march, I can more or less raise public awareness on this ignored issue.”

She said she hoped that from this little spark, the issues over the meat industry will be stressed and lead to changes in the food industry and people’s consumption habits.

Another participant, Prempreeti Harntanong, who is director of Roong Aroon School, said she brought teachers from her school to participate in the event.

“Our school gives environmental issues a high concern and we include studies on the environment and nature into our curriculum as we want our students to live in a healthy environment,” Prempreeti said.

“So this is a good opportunity to let our teachers get first-hand experience about environmental campaigning and learn from environmental activists about climate change and other related problems.”