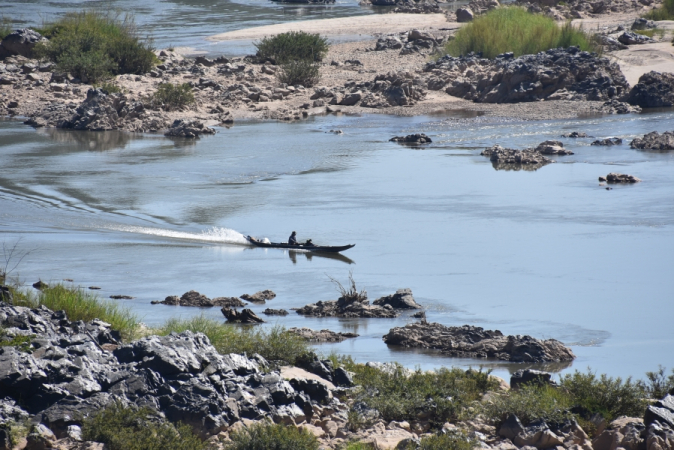 Local residents and environmentalists spent the weekend having a hot debate with the Chinese Embassy about Beijing’s utilisation and management of the Mekong River.

While the embassy accused Thai media of spreading false information on China’s development projects in Southeast Asia’s longest rivers, the Thai Mekong People’s Network fought back, saying Beijing was exploiting the Mekong for its own benefits.

The embassy issued a statement last Friday defending China’s projects in the Mekong – known in China as Lancang – in relation to ecological protection, the blasting of rapids, hydro-power projects and the sharing of hydrological data.

The group, representing people living along the river in eight provinces, responded on Sunday saying the river’s resources have been destroyed and exploited by large corporations.

“With the aim of building a green railway, the China-Laos Railway project has synchronised environmental protection with construction at the stages of design, implementation and inspection, which is hailed by the government and people of the Laos.”

However, the people’s network countered by saying the so-called “green” aspect of the China-Laos railway project is only at the conceptual level, and that there are no concrete plans on how the destruction of natural resources, livelihoods and local economies will be alleviated.

“The project has drawn strong public criticism due to the extensive adverse impacts it is having on the people and the environment,” they said.
As for the blasting of rapids to clear navigation routes from southern China via Myanmar and Thailand to Laos, the embassy said the project was only being studied. “Up until now, the four countries have had no engineering plans, let alone taken any action in the so-called ‘rapids blasting’,” it said.

However, the network argued that the “blasting” began in 2000 and a major portion of the rapids from China’s southern Yunnan province to the border of Myanmar and Laos has already been cleared. “As a result of this, the ecological system of Mekong and the livelihoods of people downstream have been exposed to adverse impacts,” they said, adding that the key concern is the plan to further clear rocks and rapids from the Golden Triangle via the Thai-Lao border to the Lao province of Luang Prabang.

During a “consultation meeting” in January in Chiang Rai’s Wiang Kaen and Chiang Saen districts, participants were only shown a map and a plan to “improve” 13 rapids in the area by the “surgical removal of some small rocks”, when in reality the rapids slated for removal are large ones with gigantic rocks. The people’s network also pointed out that the Mekong project plans also explicitly state that 20,000 tonnes of rocks will be excavated in a 6-kilometre stretch of the river.

As for the hydro-power dams, notably in the mainstream of the Mekong, the embassy said China’s dams and reservoirs help regulate the flow of water during dry and wet seasons. It also said that in 2013 and 2016, when the entire Lancang-Mekong River was hit by severe drought, China – though hit by the disaster itself – provided emergency water supplies to the 60 million affected people living downstream.

It also quoted a 2017 online post by the Mekong River Commission saying that droughts in the Mekong basin were not caused by upstream dams, but more by extreme weather conditions, and insisted that the upstream dams played an important role by storing water in the wet season for use during the dry season.

However, the network countered this claim saying that the river’s levels, particularly along the Thai-Lao border, stopped following seasonal patterns since China built dams in the upper reaches of the Mekong 20 years ago. Since then, it said, people have had to rely entirely on water being discharged by the Chinese authorities.
The network also said that the sharing of hydrological data of the dams is pointless because “data notifications, which have only been made through government channels, have failed to keep the public sufficiently informed”.

The network said, China has also “failed to address transboundary impacts, and the notifications have also not addressed the impacts on downstream communities and the ecological system”.