The Mekong River’s extremely low level of water caused by upstream hydropower dam projects has triggered the death of masses of fish and heightened the risk of mass extinction of aquatic life in the entire Mekong River Basin, environmental experts highlighted on Friday.

They said that the ongoing loss of biodiversity in the Mekong Basin is posing a major threat to food security and wellbeing of hundreds of millions of people in the region.

Narit Art-harn, a representative of locals in Bueng Kan’s Bung Khla district, revealed that the level of the Mekong this week was lower than the lowest during the dry season, even though mid-July is normally the rainy season and the river should be full and even overflowing.

“We are facing an extraordinary situation, because instead of the seasonal floods that we usually face this time of year, we are now encountering a severe drought, which is bad for both the people and the ecosystem,” Narit said.

He said that even though fishermen in Bueng Kan were able to catch more fish due to the very low level of water, many of the fish they caught have bellies full of eggs, because this is the breeding season for many of the species in the Mekong.

Hence, he said, he is deeply concerned that this might be the last season for the fishermen to get an abundant catch because these fish might soon be extinct.

“The extremely low level of water is killing these fish, because it is preventing them from entering tributaries to lay eggs in flooded forests and swamps, which means an entire generation of fish will vanish,” he emphasised. 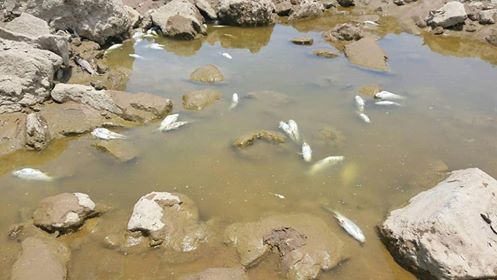 He also called on the Thai government to take more proactive steps to protect people living along the banks of the Mekong River and its tributaries from the transboundary impacts caused by hydropower dams in China and Laos.

Chainarong Setthachua, an academic from Maha Sarakham University, said many fish were found “cooked” in the hot water of ponds in the Mekong riverbed in Nong Khai’s Sangkhom district after the water level receded due to a recent reduction in water discharged from China’s Jinghong Dam and a test-run operation at Laos’ Xayaburi Dam.

Nonn Panitvong, founder of Siamensis.org and prominent freshwater fish expert, insisted that fish in the Mekong River was the most important food security for people living across the Mekong Basin.

Hence, he said, that by ignoring the serious loss of biodiversity for the sake of hydropower dams, the governments in the region are trading ecosystems that sustain tens of millions of people for the wealth of a handful of investors.

“When they [the authorities and investors] build new hydropower dams, they claim energy stability as the reason, but in the end, people cannot eat electricity. Fish and vegetables from the river are actually our food,” Nonn stressed.

Niwat Roikaew, chief of Chiang Rai’s environmental conservation group Rak Chiang Khong, said that he will send a petition detailing the Mekong River’s bizarre water levels and other impacts China’s upstream hydropower projects are having on people to the Chinese Embassy in Bangkok soon.

“I want a productive discussion based on academic information with Chinese authorities to mitigate the adverse impact these hydropower dams are having on the ecosystems and the people of the Mekong River Basin,” Niwat said.

“If China wants to be a superpower, it must improve its standards of environmental protection on all its projects, otherwise negative feedback from harmful projects will affect its reputation globally.”