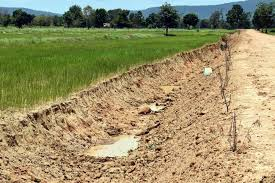 Photo by: The Nation

The Office of Water Resources (ONWR) called an urgent meeting of agencies to discuss remedial agriculture remedial measures for next month when rainfall is likely to be low and not replenish the dams.

They’re looking at plans to store 3.2 billon mm for future droughts and to open an emergency ad hoc centre to gather and analyse data on the crisis. ONWR has recommended that government agencies immediately push ahead with dredging all waterways and monitoring water usage

Three main factors have contributed to the lower water supply compared to previous rainy season. 1. The amount of rainfall in 2018 was 10 – 17-per-cent lower than average; 2. The outflow to 1.2 million rai of over-planted agricultural areas during 2018 – 2019, especially near the Chao Phraya river required 1.5 billion mm or 20 per cent more the water reserved than planned. Finally, rain this year is expected to be down by 30 -40 percent in the north, central and northeast areas, causing the amount of water flowing into the main reservoirs to be considerably less than expected and a need to allocate water from reservoirs to agricultural areas.

“Since July 1, the department of meteorology confirmed that the forecast of rainfall in the first half of rainy season will decrease 5 - 10 per cent while the other half will have the close to the average amount of rain with 1-2 great storms predicted to affect Thailand.

ONWR’s earlier analysis of the water situation led to an order to coordinate with related agencies in preparing a plan to respond to areas that might be flooded but it has now lowered the estimated outflow.

Moreover, ONWR has surveyed agricultural areas damaged by the drought or likely to be in order to provide remedial measures, especially in areas outside the irrigation area, namely 83 district in 20 provinces.

The meeting considered the measures to cope with drought during the rainy season and put forward both short-term and long-term measures including the setting up of a temporary ad hoc crisis centre in the central area to integrate with the operations centre of the relevant agencies and the provincial authorities and closely report the situation to the PM.

The measures include artificial rain-making in the area above and at the end of the reservoirs, supporting drinking water from nearby water sources in vulnerable areas, accelerating dredging waterways in order to increase the capacity of various water sources especially in 144 areas which have seen repetitive declaring drought and repairing artesian wells. Remedial measures for farmers or people affected by drought will also be introduced, such as compensation, remedies and career building and campaign for economical use of water and raising awareness of the water situation in all sectors.

In the short-term, the construction and repair of weirs in the upstream area in 67 provinces at a cost of Bt3 million will be initiated, the rainfall likely will flow in reservoirs will be reviewed, and rainwater replenishing reservoir feeders will be stored as much possible. Any water drained will be reused.

3. Determination of planting areas in accordance with water sources and water cost

“Thailand still has a chance to collect water in August for the drought that will occur from November to next April. Our target is to collect 2.3 billon mm of water in the 4 main dams (Bhumibol, Sirikit , Pa Sak Jolasid , and Kwai Noi Bamrung ), which is sufficient for consumption.” Somkiet said.

However, the rain is expected to fall outside of the collecting areas, mostly in the central region. With drought a major risk, farmers outside the 33 million rai of rice fields, 10 million of which are in irrigated areas, have been told to postpone planting.