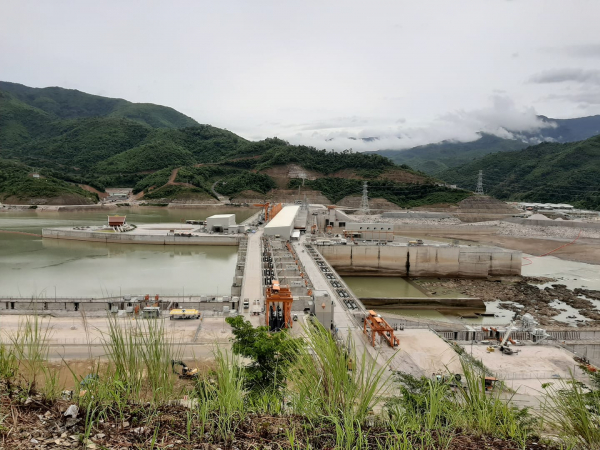 Activists say some of the blame for the severe water shortage in the Mekong River Basin lies with the Xayaburi hydropower dam in Laos.

Though dam operator CK Power PCL has strongly denied it is storing water in the dam’s reservoir and causing an extraordinary reduction of water levels downstream, hydrological information cited by Montree Chantawong from Mekong Butterfly suggests that the 1,260-megawatt dam is to blame for unnatural fluctuations in water levels and flow downstream.

Even though the rainy season has already begun in the Mekong region, the river is not bursting its banks like it usually does. Instead it is dry as it would have been in the middle of the drought season, causing widespread water shortage and mass deaths of aquatic animals.

Montree said that though a lower discharge of water from dams in China and the ongoing severe drought in the Mekong River Basin were the key contributing factors to this unseasonal drying up of the river, the Xayaburi hydropower dam, which was recently built on the river’s mainstream northern Laos, is intensifying the severity of the situation.

“Though the dam operator insists its project has no influence on the Mekong water level downstream, we have noticed that the level of the river between Chiang Saen, Luang Prabang and Chiang Khan have changed unnaturally and inconsistently,” he said.

“Under normal circumstances, the change in the water level in these three spots must be similar because they are situated next to one another.”

Instead, he said, when China’s Jinghong dam reduced its water discharge from July 5 to 15, the level of the river in Chiang Saen, which is the uppermost water station, continuously dropped by 0.43 metres, while the level of water in Luang Prabang, which is upstream of Xayaburi, rose slightly to 0.86 metres, and the level in Chiang Khan, which is downstream to the dam, dropped by 1.77 metres.

These bizarre changes at the three stations and the inconsistent fluctuations upstream and downstream of Xayaburi dam, he said, are a clear indication that the dam is not being operated strictly on run-of-river basis as claimed.

Moreover, he said, there is no public access to data on the amount of water flowing in and out of the Xayaburi dam, and there is no way of verifying if this dam is being operated strictly on a run-of-river basis – meaning the outflow matches the inflow of water into the dam.

“Xayaburi dam certainly has a reservoir that can store up to 514 million cubic metres of water and it is up to the dam’s management to decide whether it will discharge water that matches the amount of the inflow,” Montree said.

However, Xayaburi Power’s deputy manager Anuparp Wonglakorn insisted that the dam is being operated on a run-of-river basis, and has had nothing to do with the water shortage downstream of the Mekong.

“We too are victims of this serious drought and the reduction in water discharged from Chinese dams, and because we’ve received a low amount of water to operate, we’re forced to limit our electricity generation,” Anuparp said.

He claimed that Xayaburi Dam had only received water at a flow rate of around 1,700 cubic metres per second, which forced them to only operate three power turbines and generate a mere 500MW.

He also said that since the operation of the dam has been stopped, it will not be storing any water and will instead release all the excess through spillways. Hence, he said, the dam cannot cause any adverse impact downstream, as suspected by many.

However, CK Power has refused to share the inflow and outflow levels of the dam, saying this information was classified as it’s based on the company’s contract with the Lao government.