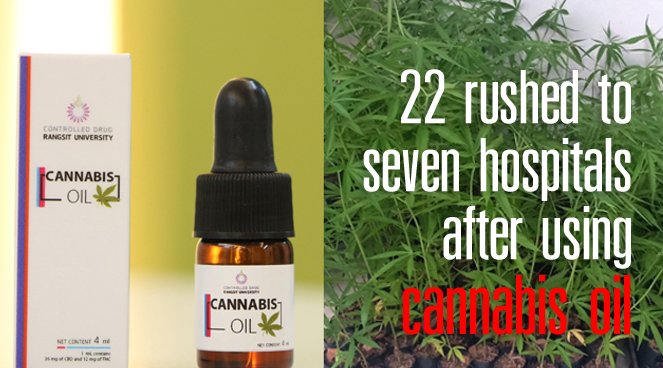 Twenty-two people have been treated in the emergency rooms of Thai hospitals because of severe side effects from the personal of use cannabis oil for medical treatment, according to the director general of the Medical Services Department.

Doctor Somsak Akkhasilp said he has received reports that use of cannabis oil has led to 22 people having to be treated for side-effects, with most patients experiencing nausea and a racing heart.

He did not say over what period of time this occurred.

Cannabis oil is not yet being widely administered through the official Thai medical system, but a process has now been put in place after the government recently legalised the medical use of cannabis under physician care.

In one case cited by Somsak, a 60-year-old monk suffering from muscle pain placed a drop of the oil under his tongue. When he awoke, his tongue had stiffened and he could not speak properly. He also felt a weakness on his left side and was admitted to Nopprat Ratchathani Hospital for seven days.

In another case, a 33-year-old woman used five drops of oil under her tongue before feeling nauseous and having difficulty breathing. She was sent to Ratchawithi Hospital, where she was given treatment for the symptoms and discharged on the same day.

Somsak said nine patients were sent to Sappasit Prasong Hospital, three to Nopparat Thani Hospital, two to the Borom Ratchonnanee National Drug Rehabilitation Institute, and one each to Lerdsin Hospital, Ratchavithi Hospital, Ayutthaya Hospital and Nan Hospital. He did not note where the remaining four patients were treated.