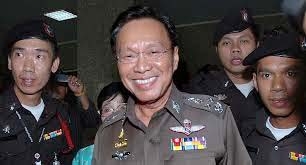 Police General Patcharawat Wongsuwan, former National Police chief and brother of Deputy PM General Prawit Wongsuwan, was injured along with five others when their van crashed against the fence of a Bangkok-Chon Buri motorway, police said.

Police said the accident took place at 9.15am on August 24 on the outbound motorway at kilometre marker No 0+900 in Bangkok’s Suan Luang district.

The hit the fence as it exited the Srirat elevated expressway on to the motorway, before flipping into the ditch on the side.

The driver Pratiphat Thaethaisong, 32, and five passengers were injured and rushed to the Samitivej Srinakarin Hospital before they were transferred to Phramongkutklao Hospital.

Officials at Phramongkutklao Hospital said nobody had sustained severe injuries or broken bones, though the doctors want to keep them in for observation.

A source from the hospital said Patcharawat had a swelling on the head and has to undergo a brain scan to look for possible internal injuries.

Pol Lt-Colonel Subin Inchuay, an inspector with highway police, quoted the driver as saying that they were heading to Pattaya for an inspection trip. The police officer said the cause of the accident is under investigation.