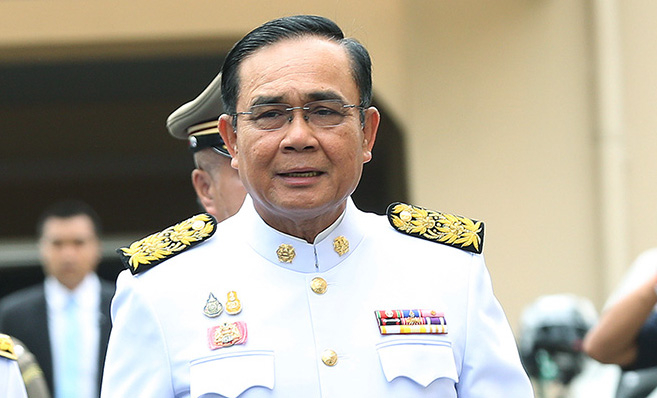 Prime Minister General Prayut Chan-o-cha led his Cabinet on Tuesday morning to receive a royally-signed printout of His Majesty the King’s speech.

Prayut and the Cabinet members attended a 9.08am rite at Government House in which a printout of the July 16 speech by His Majesty the King was handed over to them. The speech was part of the royal audience which included the swearing in of the Prime Minister and Cabinet members.

Tuesday’s rite was held in front of the King’s portrait in the Command Building. It was also attended by Cabinet secretary-general Disthat Hotrakit.

The opposition has alleged that Prayut had violated the charter by failing to complete the oath’s section on swearing to uphold the Constitution, as required by the latest charter, when he led his Cabinet members to pledge an oath of allegiance on July 16.

The opposition has submitted a motion to demand a debate on the oath controversy next month.

Asked whether the latest ceremony would affect the debate, Prayut said everybody should refrain from commenting about it.

On Monday, Deputy Prime Minister Wissanu Krea-ngam clarified that the ceremony to receive the royal speech printout is not a retaking of the oath.