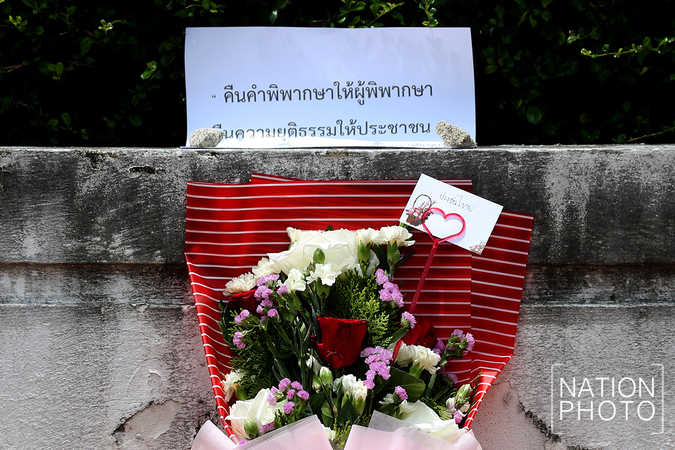 People place flowers in front of the Yala provincial court with an appeal that reads, “Return verdict to the judge, return justice to the people”. The appeal has been trending on social media. Charoon Thongnual/NationPhoto

People on Saturday placed flowers in front of the Yala Provincial Court to show their support for Khanakorn Pianchana, a judge who allegedly tried to kill himself on Friday in the court premises.  A message that said “Return verdict to the judge, return justice to the people” was also placed among the flowers.

The judge shockingly shot himself in the courtroom on Friday after he had finished reading of a verdict regarding accusation case against a gang of alleged criminals.

News reports suggested that his supervisors had forced him to alter the verdict against his will.

Since Friday, Thai netizens have been debating and sharing news reports about the shocking event. The outcry “Return verdict to the judge, return justice to the people” was trending on social media on Saturday.

The Office of the Judiciary announced on Friday (October 4) that the court would investigate a judge of the Yala provincial court who allegedly tried to commit suicide in his courtroom.

Khanakorn, a senior judge at the Yala provincial court, reportedly pulled out a pistol and shot himself in the chest at the end of a verdict reading on Friday afternoon, officials said.

The Office of the Judiciary reported that the judge had been moved out of the hospital’s intensive care unit and was now out of danger. A preliminary enquiry revealed that personal stress was the reason behind Khanakorn’s suspected suicide attempt, however the court will investigate further, officials said.

News reports and local media outlets suggested that before shooting himself, Khanakorn had posted on his Facebook page that his supervisors were allegedly trying to influence his judgement in the criminal case. The post was later removed. Social media, however, has laid hands on and widely shared a 25-page statement supposedly posted on Facebook by Khanakorn.

The statement reveals that the case Khanakorn was hearing related to national security and was linked to secret associations, conspiracy and gun-law offences. The document allegedly described disagreements among senior judges over the ruling and Khanakorn’s reported decision to acquit all five defendants.

At the end of the document, there is a quote that read: “Return verdict to the judge, return justice to the people”, suggesting that his supervisor judges had allegedly violated the principle of independence of a judge in delivering a verdict.

Tags:
verdict justice to the people judge independence of a judge