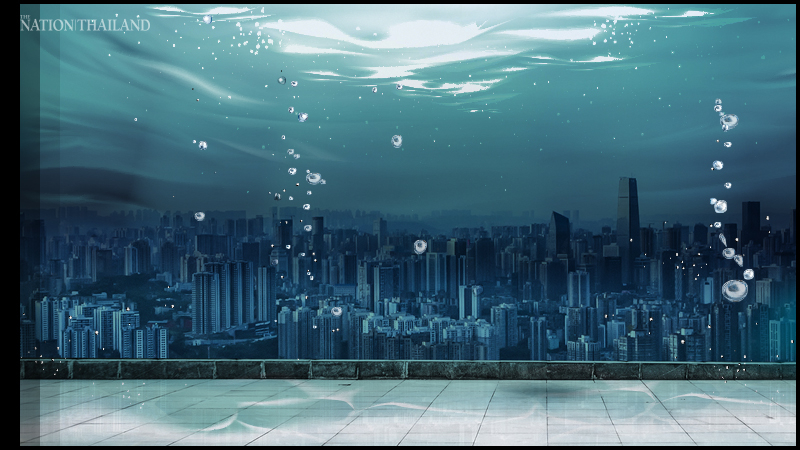 Climate Central, a non-profit organisation that analyses and reports on climate science, has unveiled a new study showing that many cities, including Bangkok, will be under water in 30 years due to rising sea levels.

The report said that sea levels are expected to rise between 0.6 and 2.1 metres or more within this century, putting more than 300 people at risk of flooding at least once a year. The number of affected people has risen threefold compared to an earlier study, which put the figure down to 80 million people.

Dr Scott Kulp, Climate Central’s senior scientist and leader of the research team, explained that the previous study had estimated the impact by using satellite images of land height for calculation. However, he said, it did not compare the ground level to the height of trees or buildings.

“Our researchers solved this problem by using artificial intelligence and found results from the previous report unreliable,” he said.

Kulp added that climate change will affect many regions, especially Asia, where more than half the population lives in risky areas in China, Bangladesh, India, Vietnam, Indonesia and Thailand.

According to the new report, 12 million people living in risky areas, especially in Bangkok, will be affected by rising sea levels by 2050. The report also shows that more than 20 million people in Vietnam will be affected as the country’s southern region will virtually disappear and most of Ho Chi Minh City will be under water.

Meanwhile, up to 23 million people living in Indonesia, which has recently announced that the capital will be moved from Jakarta to East Kalimantan on Borneo island, are at risk.

Loretta Hieber Girardet, Asia-Pacific chief for the United Nations Office for Disaster Risk Reduction, said many cities are already facing severe problems from climate change, such as farmers are having to move to cities to seek employment due to flooding.

The study was published on October 29 in the “Nature Communications” journal.