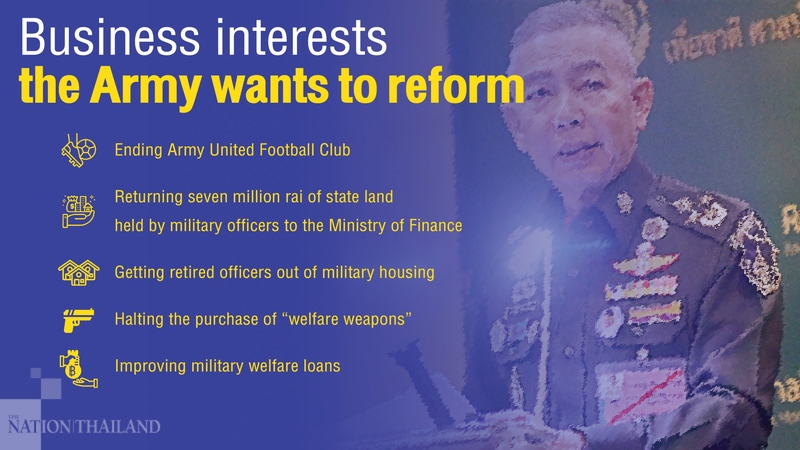 Critics are skeptical of Army Chief General Apirat Kongsompong's pledge to reform the army, unless the military is open to be scrutinised by independence anti-graft organisations.

“It is just a show,” said Titipol Pkadeewanich, dean of the Ubon Ratchathani University, in response to Apirat's promise to reform the army following the mass shooting in Korat over the weekend.

Apirat held a lengthy press conference to offer his apology for the tragic incident committed by a lone solider in Nakhon Ratchasima. Apirat conceded there are many private businesses in the military in which some high ranking officers have taken advantage of their subordinates. Reports suggested that Sergeant-Major First Class Jakrapanth Thomma killed his commander due to conflict over a property deal, before he went on a shooting spree that killed 29 people and injuries many others. He was later shot dead by security force.

Apirat also pledged to end the rights to own many types of weapons by  military personnel. Apirat also said retired officials must move out of military residential properties to make way for others.

Titipol said Apirat came out to apologise to the public because the army was under much pressure after the tragic incident, adding that he did not think there would be significant changes regarding his reform promises.

Corruption is a problem not only in the Army but also in the Navy and Air force. The public has known for a long time that retired officials refuse to move out of their residences in the military compounds. It is an act of  corruption that the National Anti-Corruption Commission and the Office of Auditor General of Thailand have never tackled, he noted.

“Military reform is much needed, but has been denied by the government and military,” said Titipol. Prime Minister Gen Prayut Chan-o-cha has long complained about problems of politicians but he never admitted the problems in the military. While academics and politicians who criticised the military were attacked by government officials and military officers, Titipol pointed out.

“I don’t think that promises will be carried out and they will evaporate when public interest in the tragic event wanes,” he added.

Meanwhile, Mana Nimitmongkol, director of the Anti-Corruption Organisation of Thailand said it was a good sign that the Army chief had admitted that these problems must be solved soon. He, however, suggested that the Army needs outside help in order to make the reform effective. In the past, there was rampant corruption relative to the issuance of licences for new factories with Department Industrial Works’ officials demanding kickbacks. The collaboration between private sector and the Industry ministry had successfully resolved it, he said.

He also pointed out that the National Anti-Corruption Commission (NACC) needs to strengthen its transparency assessment in order to reflect the real situation.

The NACC recently named the army the country’s most transparent agency under its Integrity and Transparency Assessment. That review was only paper work as the NACC did not look into the corrupt practices of many Army officers. The NACC needs to strengthen its evaluation method, he said.

While it is a change on the part of Apirat in promising to solve the issues, his actions if any will go against vested interest in the army, he said.