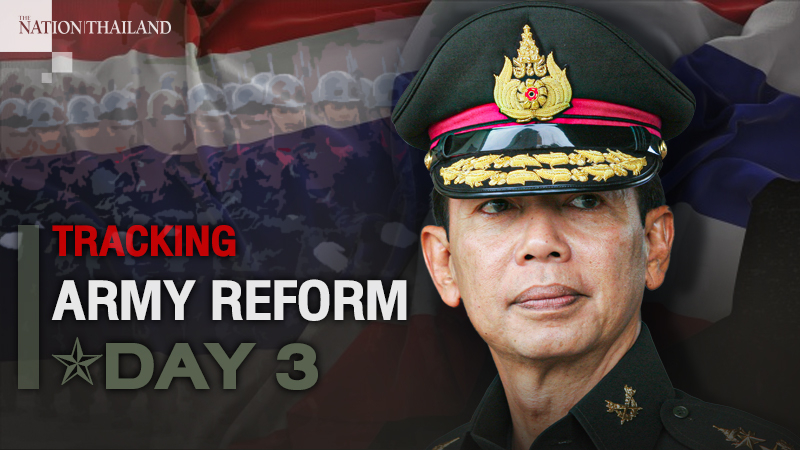 Army chief General Apirat Kongsompong pledged reforms on Tuesday after a soldier disgruntled over a property deal with his commander shot dead 29 people in Nakhon Ratchasima. The Nation has begun tracking the progress of that promised reform, with Day 1 being the date of his press conference, at which he apologised for the soldier’s actions and pledged to get military officers out of dubious private businesses.

General Apirat revealed more details of his plan on Wednesday (February 12), saying the Army would return state land to the Finance Ministry’s Treasury Department along with businesses such as the Suan Son Pradipat Hotel, kick-boxing stadiums and golf courses.

The ‘welfare’ flaw that turned deadly
He said the ministry would collect the revenue these businesses generate and reallocate part of it to welfare for military personnel.
Though the military does not train its personnel in business management, some officers hold business positions concurrently with their Army careers. They will henceforth have to remain in the barracks, Apirat said.
“I want to correct the mistakes made by the Army and I am ready to accept any consequences stemming from those who are not happy with my decisions,” he said.
Yuttana Yimgarund, director general of the Treasury Department, acknowledged that the Army was ready to hand over state land it occupies, and said a memorandum of understanding to that effect will be signed on Monday.
The land in question covers a million rai and in some cases is illegally occupied by non-military people, in other cases has potential for commercial development, he said. The illegally occupied land will be rented out for legal residential or agricultural purposes.
This portion of the land is scattered around 10 provinces, including Surat Thani, Nakhon Swan and Chiang Rai, Yuttana said.
The Army has a vast amount of land with commercial potential, but it is prohibited by law from developing it as such, he said. The department must first determine the locations of these properties.