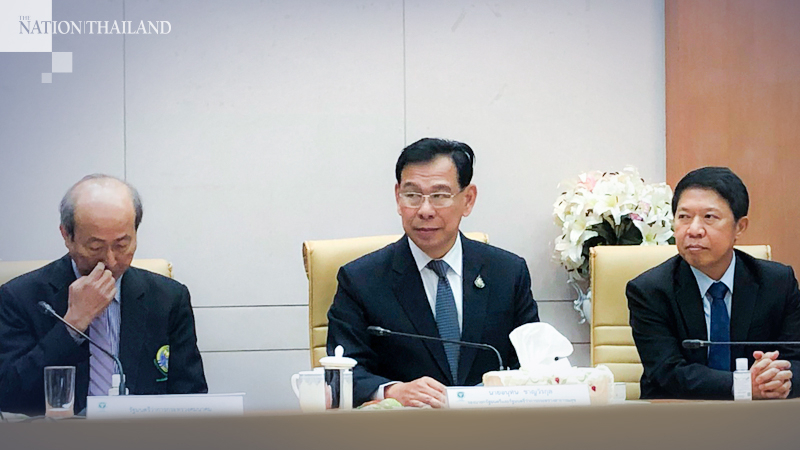 Dr Sukhum Karnchanapimai (in the middle)

A 25-year-old Thai man who guided compatriots on tours of South Korea has been confirmed as the 41st confirmed victim of the Covid-19 virus in this country.

Health Ministry permanent secretary Dr Sukhum Karnchanapimai said on Friday (February 28) that the man began showing symptoms on Monday and has been quarantined ever since at the Bamrasnaradu Infectious Diseases Institute in Nonthaburi.

Officials have urged everyone who was a passenger on the same flight that brought the man home to submit to testing.

Thailand has now seen 41 Covid-19 infections, of whom 28 recovered and have been released and 13 remain hospitalised.

Two victims described as having been in severe condition have now tested negative for the virus but were advised to get further rest in medical care.

Global epidemiology data indicate that the virus poses the greatest risk to members of the same family and to medical personnel who fail to wear the correct protective gear.

Dr Sukhum reiterated that anyone returning from at-risk locales overseas must place themselves in quarantine at home for 14 days after consulting a doctor and being truthful about their travels and physical condition.