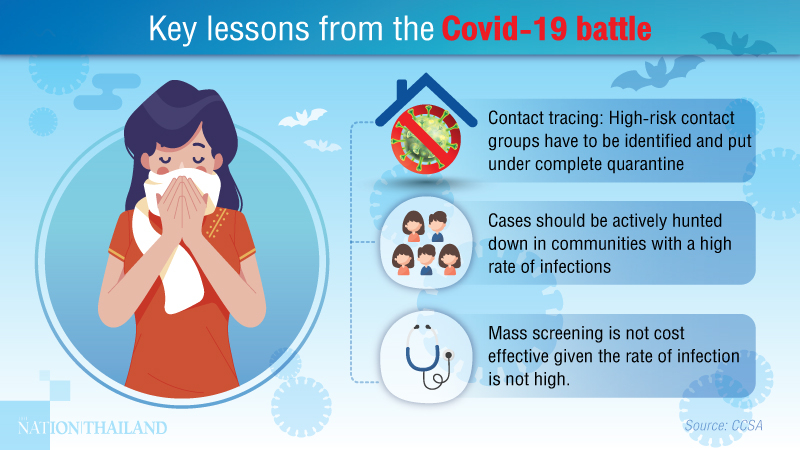 Mass-testing not that effective in battle against contagion

Contact tracing has proved to be the most effective in Thailand in the battle against the Covid-19 outbreak, government officials say.

However, due to Thailand’s limited resources, it cannot afford mass screening to uncover new infections, Taweesin Visanuyothin, spokesman of the Centre for Covid-19 Situation Administration (CCSA), said on Monday (April 13).
He pointed to the lesson learned from Thailand’s top tourist destination Phuket, which got hit by the highest number of infections, 44.03 cases for every 100,000 people, followed by Bangkok at 23.03 and Yala at 15.72.
Of the total 2,579 cases in Thailand as of Monday, 182 are in Phuket alone, compared to 1,306 in Bangkok and 150 in Nonthaburi.
Bangkok’s population is 8.281 million versus just 416,582 in Phuket and 254,375 in Nonthaburi.
In Phuket, the first infection was found on January 26 and the numbers have been rising rapidly, leading to a severe lockdown.
In response to criticism about the lack of mass screening, Taweesin cited four hospitals that have conducted tests on fairly large sample groups and found relatively low rate of infections. For instance, Patong Hospital tested 1,712 people and found 19 infections or just 1.11 per cent; Vachira Phuket Hospital tested 763 and found 2 infections or just 0.26 per cent; while Cherngtalay (Thalang) Hospital conducted 103 tests and found 5 infections or 4.85 per cent, which is very large. In comparison, Thalang Hospital tested 337 people and found no infections, he said.
“Judging by these statistics, contact tracing has proved to be the most cost-effective and efficient means of finding infections,” he said.
The CCSA has highlighted four key lessons learned from the Covid-19 battle:
1. Those in high-risk contact groups have to be identified, and to ensure this measure is effective, the authorities need to enforce strict screening measures and the police have to step in and identify those evading the process;
2. Those in high-risk contact groups have to be completely isolated;
3. Active hunting for cases has to be applied to communities that have a high rate of infections or when contact tracing cannot be applied to all high-risk people;
4. Mass screening is not cost effective as the rate of infection is not high enough.
In response to criticism that Thailand’s number of cases is low because the authorities have been testing far too few people, Taweesin said mass screening is very expensive and does not guarantee success.
Meanwhile, in a separate interview with The Nation, Somchai Jitsuchon, research director at Thailand Development Research Institute (TDRI), said he agrees that contact tracing is the most effective measure to identify new infections. “But it should be combined with other measures. The best combination varies from place to place and how far the virus has spread,” he said.