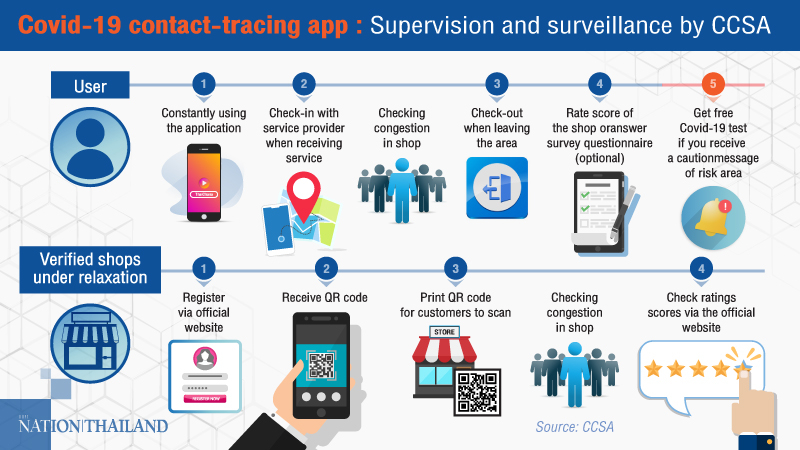 The government is launching a Covid-19 contact-tracing app, aimed at preventing a second wave of infections while assuring privacy protection

Businesses owners were advised to register with the platform, which will generate a QR code for them, then they can put up the QR code on their front doors, and it will tell them about the number of people in their business places, and their services will be rated.
Customers can just use their smartphones to check-in and check-out at those venues. Authorities will know only the phone number of the users, he said in response to concerns about privacy.
Meanwhile, Dr Polawat Witoolkollachit, inspector general  of the Ministry of Digital Economy and Society responsible for this mobile app, said that business owners will be invited to register with the platform to be officially launched tomorrow (May 15) afternoon. After registration,  they will get a QR code.
People who come to shops, such as restaurants or barbers, have to scan the QR code to enter, which will let them know if the shop is crowded or not. When checking out, customers are advised to rate services in order to report whether shops are implementing preventive measures such as social distancing, arranging gel for handwash, wearing masks and avoiding congestion.
Should anyone contract the virus, risk groups who come to the shop at that specific time interval will be informed via a message and they will be asked to test for the virus.
“By using this application, it will help to more efficiently trace those in risk groups, as South Korea has done,” he said.
Wide use of the application will assist Thailand to implement the second round of lockdown easing and further relaxations, he assured.
“The information will be kept by the Department of Disease Control and will be used for disease control purpose only,” he assured in response to concerns on the privacy issue.
The CCSA reported one new case of Covid-19 on Thursday after no new infections the previous day, while authorities are still cautioning about easing the lockdown due to many countries experiencing a second wave of infections after some restrictions were lifted.
Thursday marked one of the best days for Thailand in battling the pandemic.
The man who contracted the virus lived in Chiang Mai, but he had just returned from Phuket where he used to work.
Cumulative cases rose to 3,018 of whom 2,850 have recovered, 112 remain in hospitals while the death toll remains at 56.