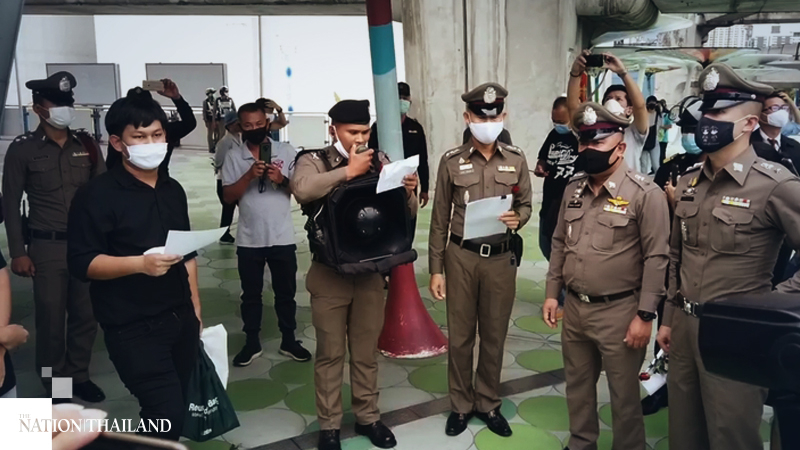 A protest on Friday (June 5) against the abduction of a Thai activist in Cambodia prompted a police warning that the gathering was a violation of the Covid-19 emergency decree. No arrest was made.

A group of protesters gathered on the Bangkok Skywalk in Pathumwan district on Friday over the abduction of Wanchalearm Satsaksit, 37, a bitter critic of the Thai government led by General Prayut Chan-o-cha. Wanchalearm was living in self-exile in Cambodia and was reportedly abducted by unknown persons from outside an apartment building in Phnom Penh on June 4.

The protest rally was led by Parit Chiwarak, a former president of the Student Union of Thailand.

Police advised the protesters to avoid public gatherings to prevent the spread of Covid-19 while dispatching officers around the area to monitor the situation. Protest leaders took turns to give speeches and dispersed from the area around 5.45pm after placing roses in front of Wanchalearm’s portrait.

Sitanan Satsaksit, 47, sister of Wanchalearm told BBC Thai that she had spoken to him on the phone on Thursday evening as Wanchalearm left his flat to purchase food. “I can’t breathe” were the activist’s final words before the conversation abruptly ended.

“On May 13, there were six police officers who visited my mother’s house in Ubon Ratchathani asking where Wanchalearm was,” she added. “My mum told them she had no idea where he was, as we never visit him in Cambodia after he left Thailand six years ago.”

Wanchalearm is wanted in Thailand for allegedly violating the Computer Crimes Act by running an acerbic anti-government Facebook page.

Sitanan added that her brother left the country after the 2014 coup d’etat and lived in several countries for two years before settling in Cambodia, as their family has an acquaintance there who could give him advice on doing business in Cambodia.

Sitanan said that she had very little hopes her brother was still alive.