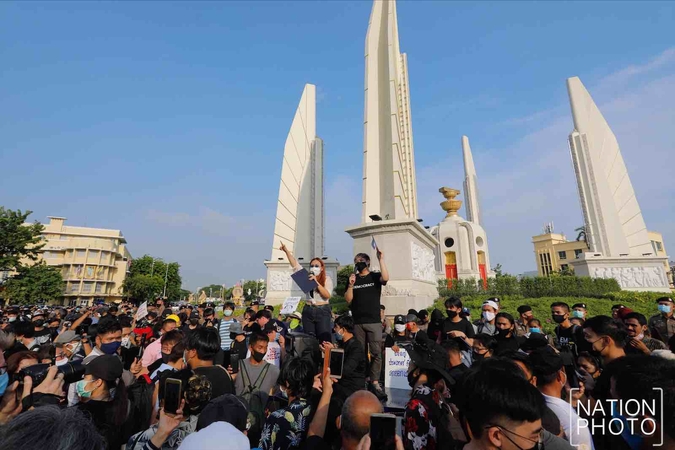 The Student Union of Thailand and the "Yaowashon Plod Ak -- Free Youth" group are jointly holding a street protest at Democracy Monument on Saturday evening to express their opposition to what they call Thailand's "deep-rooted dictatorial system".

The Free Youth group earlier posted on its Facebook homepage demanding that the Prayut Chan-o-cha government dissolve Parliament, as it has failed in its economic management, especially amid the Covid-19 pandemic. The government's imposition of the state of emergency and the nationwide lockdown had led to rising unemployment and lack of income.

It also asked for the drafting of a new charter, citing that the current Constitution is designed to enshrine the dictatorial system under the cloak of democracy.
It also asked the government to stop intimidating the people. It said that after the general election last March, people had hoped that Thailand would have more democracy and freedom to express views and hold gatherings. They said that people still faced both physical and psychological intimidation. The page also called on Parliament to scrap the law deemed as violating freedom of expression and gathering under the Constitution.

Police deputy spokesman Pol Colonel Kritsana Pattanacharoen said that National Police chief Pol General Chakthip Chaijnda has assigned high-ranking police officers, including deputy National Police chief Suwat Jaengyodsook, to take care of the situation.
Kritsana said that political expression could be done but it must be under the law and must not violate the rights of others. He also advised those planning to gather to follow related rules, including precautionary measures to prevent the spread of the virus.