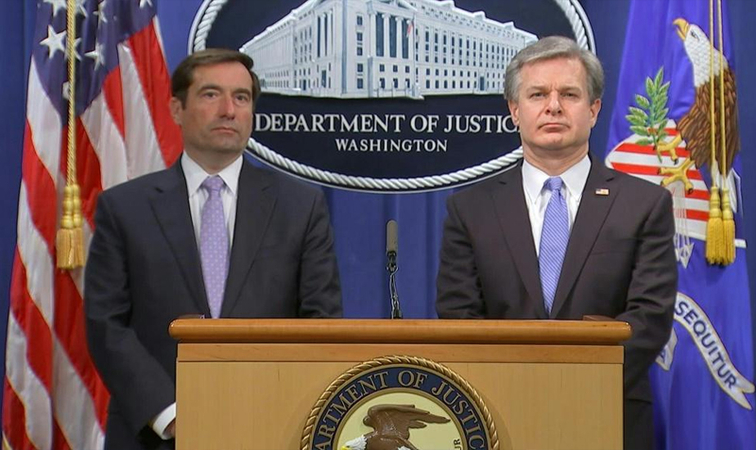 WASHINGTON - The FBI has arrested five individuals on charges they conspired as foreign agents in an operation called "Fox Hunt" to try to force immigrants from China who angered that country's leadership to return there to be punished, officials announced Wednesday.

Assistant Attorney General John Demers said Fox Hunt sometimes targeted individuals who might have violated financial laws and were legitimate targets of law enforcement investigations. But many other targets, he said, were political rivals, dissidents or critics of the Chinese government. Pursuing those people with threats and coercion, sometimes directed at the relatives of those targeted, represents "a clear violation of the rule of law and international norms," he said.

Rather than use established legal systems such as Interpol or requests for assistance from U.S. law enforcement, the Chinese agents took matters into their own hands and tried to intimidate people into returning to China, U.S. officials said.

The announcement marks the latest effort by the United States to fight back against what it says is China's wanton disregard of laws regarding computer hacking, surreptitious influence operations and intellectual-property theft. It also highlights an ongoing tension between the two countries over law enforcement issues - the People's Republic of China and the United States have long been at odds over a host of extradition issues, and the charges announced Wednesday show how much more contentious that disagreement has become.

Arrests were made in New York, New Jersey and California, officials said. Four of those said to be Chinese government operatives were identified as Zhu Yong, Hongru Jin, Rong Jing and Zheng Congying. The fifth person in custody is Michael McMahon, a New Jersey private investigator who assisted in the surveillance and pressure tactics, according to U.S. officials.

Three other suspects - Zhu Feng, Hu Ji and Li Minjun - were charged as participants in the conspiracy but are not believed to be in the country.

"With today's charges, we have turned the PRC's Operation Fox Hunt on its head - the hunters became the hunted, the pursuers the pursued," Demers said.

Court papers say the surveillance and harassment of Chinese American targets stretched from 2016 to 2019. In one case, the ring allegedly brought the elderly father of one target from China to the New York area to "threaten and attempt to coerce" the man, identified only as John Doe-1, to return to China.

China also allegedly tried to pressure the same man's adult daughter, taking pictures and videos of her as part of their pressure campaign. In September 2018, they allegedly left a note on the man's door, stating: "If you are willing to go back to mainland and spend 10 years in prison, your wife and children will be alright. That's the end of this matter!"

The charges, which include conspiracy to act as an agent of China and conspiracy to commit interstate and international stalking, carry a maximum possible prison sentence of five years.

Last month, the Justice Department charged five Chinese nationals in separate global hacking schemes targeting more than 100 video game companies, universities and other victims. At the time, Washington accused Beijing of tolerating such crimes because the defendants allegedly worked on behalf of the country's spy services as well.

The Trump administration has made criticism of China a centerpiece of its foreign policy, chiefly on issues surrounding trade and competition in the global marketplace.

"No country can be respected as a global leader while paying only lip service to the rule of law and without taking steps to disrupt brazen criminal acts like these," Deputy Attorney General Jeffrey Rosen said in September when the hacking charges were announced.