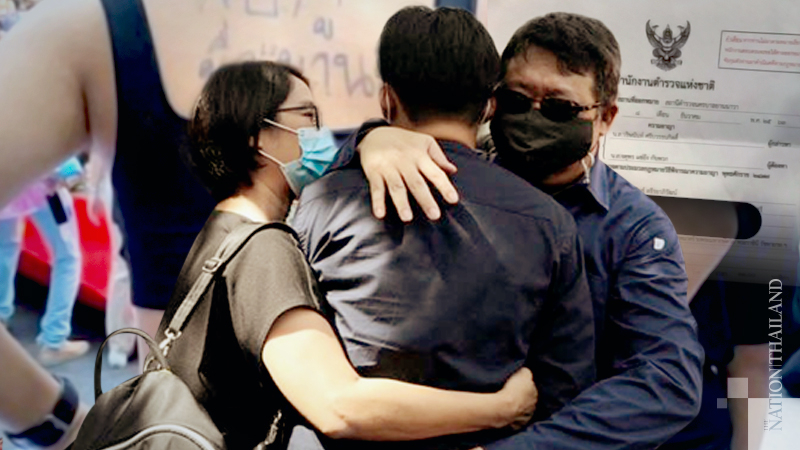 The father of a 16-year-old student who has been hit by lese majeste charges, said he will always respect his son’s decisions, regardless of whether they are right or wrong.

On Thursday, two protestors were summoned to Yannawa Police Station in Bangkok to acknowledge their charge of violating Section 112 of the criminal code, which states that “whoever, defames, insults or threatens the King, the Queen, the Heir-apparent or the Regent, shall be punished with imprisonment of three to 15 years”.

Two individuals summoned yesterday had participated in a pro-democracy rally in Bangkok’s Silom Road on October 29.
They were Jatuporn Sae-Aueng, who had dressed in a traditional Thai costume that day, and a student aged 16 – the youngest person ever to face lese majeste charges.

On Friday, the boy’s father said in a Facebook post: “I can sincerely say I do not agree with some things that my son has done. But I respect his decisions. I’m not sure if it’s right or wrong, but I’ve taught my son the freedom of thought, taught him to ask questions and find answers by himself. I have also taught him to take responsibility for his actions.”

In terms of the charge, he said “it is a matter of justice”. As for his own feelings, he said: “It’s painful for a parent to see his son at this age facing such severe charges.

“As a parent at this time, all I can do is hold my son’s hand tightly and help him overcome obstacles. When the child falls down, all a parent can do is provide a cushion to break the fall and reduce the pain,” his post read.

He father also said he hopes this pain only occurs in his home, and does not spread to other families.