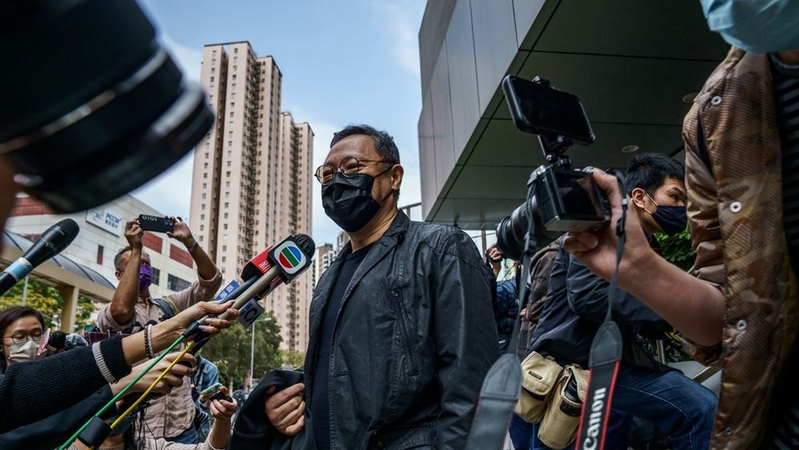 Defiant Hong Kong protesters risked arrest outside a local court in the biggest demonstration in months, as dozens of the city's most prominent pro-democracy activists were jailed on subversion charges and authorities in Beijing moved to limit the opposition's role in future elections.

The arrests of 47 opposition figures including key protest organizers Joshua Wong, Benny Tai and Jimmy Sham over their roles in an informal election primary last year represented the most sweeping use of the national security law imposed by China last year. The assembled activists appeared in a mass hearing Monday before Chief Magistrate Victor So.

The proceedings drew hundreds of supporters outside the courthouse in the West Kowloon area. Not only did participants risk arrest by attending an unauthorized rally, some chanted "Liberate Hong Kong! Revolution of our time!" -- a slogan banned by authorities since the security law's enactment.

"I'm here to support our comrades," said Kwan Chun-sang, a district councilor. "As long as this breath lasts, I'll fight until the end." 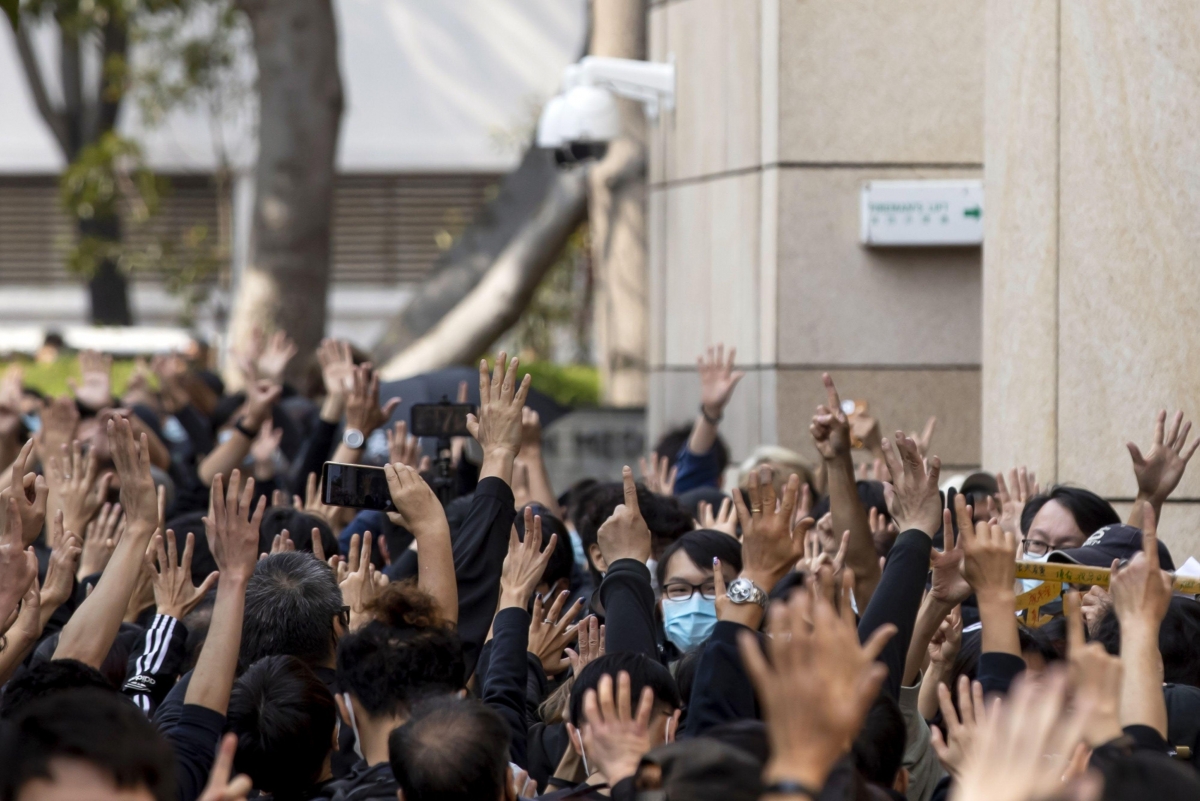 In another court in the same complex, a handful of other prominent activists -- including Martin Lee, Hong Kong's so-called Father of Democracy, and media tycoon Jimmy Lai -- were being tried on separate charges over their roles in an unauthorized rally.

The latest charges were condemned by the U.S. and the European Union, with Secretary of State Antony Blinken calling for the "immediate release" of the activists. The security law case was just one of several moves by authorities to clamp down on the opposition ahead of a legislative election planned for later this year, after being delayed in September.

The move comes ahead of China's annual legislative session, with senior Chinese officials calling for an overhaul of Hong Kong's election system that could further reduce the already-limited influence of pro-democracy politicians. Xia Baolong, the head of the Chinese agency responsible for the city, is meeting Hong Kong officials over the mainland border in Shenzhen to discuss electoral changes.

"The decision to charge these people also suggests that the government wants to do real and lasting damage to the political opposition in Hong Kong, above and beyond the 2021 election cycle," said Thomas Kellogg, executive director of the Georgetown Center for Asian Law. "It may be that we're seeing the end of formal opposition politics in the SAR, which would be a real shame," he said referring to Hong Kong's status as a special administrative region. 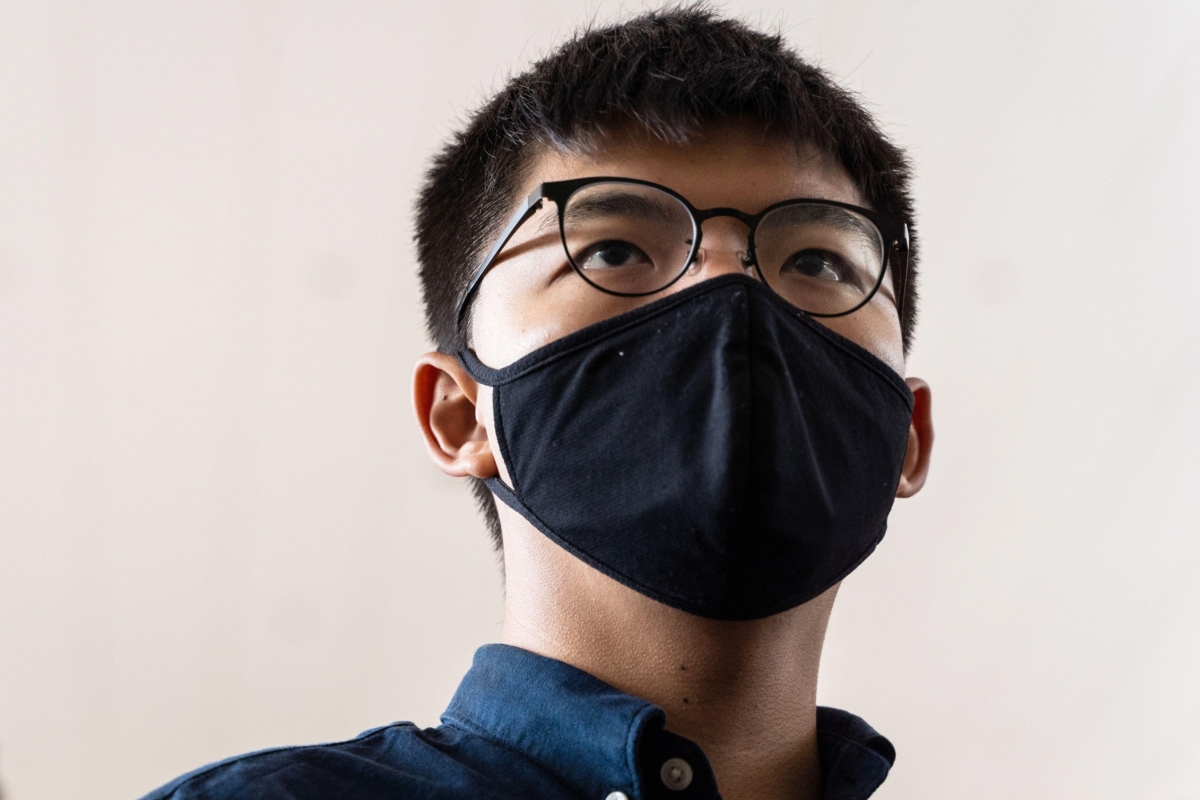 Beijing is tightening control over the Asian financial center after a wave of historically large and sometimes violent democracy protests in 2019. The national security law carries sentences as long as life in prison depending on the severity of the offense, and has been criticized by lawyers, rights groups and international governments as a violation of Beijing's promise to respect Hong Kong's freedoms and "high degree of autonomy."

The opposition figures detained Sunday are being prosecuted over their roles in helping organize a primary that drew more than 600,000 voters in July to choose candidates for Legislative Council elections. Authorities say the primary, as well as plans to force the resignation of Hong Kong Chief Executive Carrie Lam using a provision of the mini-constitution, were part of an illegal attempt to paralyze the city's government.

The election was eventually postponed by a full year, with the government citing the coronavirus. Critics said the pro-China local administration hoped to avoid a repeat of an election defeat in local district council polls in late 2019.

The charge facing Wong, who testified before the U.S. Congress during the protests, was the first for him under the national security law. He is already serving a sentence of more than a year in prison handed down in December for a separate charge related to a protest in 2019.

Authorities didn't charge American lawyer John Clancey, who was involved in the primary and was among those arrested in January. He told reporters after having his bail extended Sunday that he was asked to report to the police again in early May.

Former Legislative Council President Rita Fan told officials at the Shenzhen meeting that district councilors should be barred from the 1,200-person committee that selects the chief executive, according to the Standard newspaper. The 2019 victory for democracy advocates in 17 of 18 local district councils gave the opposition around 117 seats on that committee, giving them a better chance of blocking Beijing's choice to lead the city.

While almost 100 people have been arrested under the new law, prosecutors had previously only brought charges against 10 of them. The most prominent is media mogul Lai, who has been denied bail and is awaiting trial on charges that he colluded with foreign powers to impose sanctions or engage in hostile activities against Hong Kong or China.

"People just want to express their wish on how the pro-democracy camp can get more seats in the Legislative Council, but they're being accused of 'subversion,'" District Councilor Angus Wong said outside the court. "The future of Hong Kong is very gloomy."