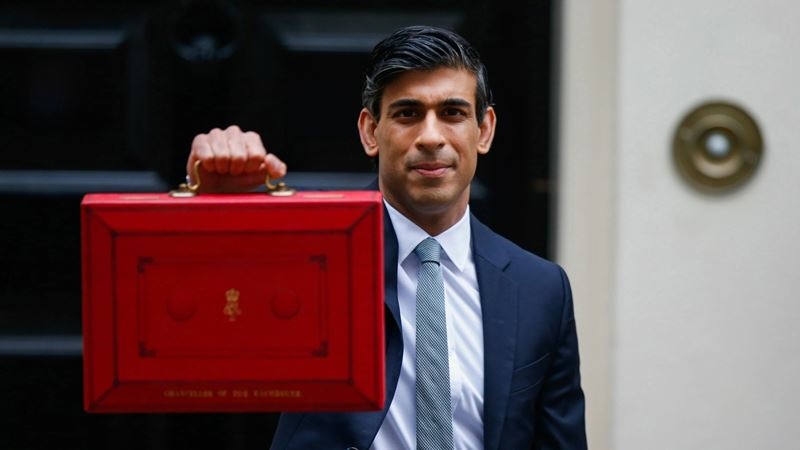 Chancellor of the Exchequer Rishi Sunak on March 3, 2020, in London. MUST CREDIT: Bloomberg photo by Hollie Adams.

U.K. finance minister Rishi Sunak announced he will carry on spending to help the economy through the pandemic emergency but outlined a plan for businesses and individuals to start paying the huge bill in the years ahead.

With the country mired in a third national lockdown, the chancellor of the exchequer delivered his annual budget and made clear that saving jobs is his immediate priority.

He added 65 billion pounds ($90.7 billion) of aid to help companies and citizens make it through the rest of this year and next, taking the government's total fiscal support to 407 billion pounds.

In a dramatic statement to Parliament, Sunak then sketched out a blueprint to start restoring the U.K.'s battered public finances over the coming years. At the center of his plan is a politically risky freeze of income tax thresholds, pulling more people into paying higher bills as earnings rise in future, and an increase in corporation tax to 25% in 2023, from 19% now.

Given how much the government is spending to help businesses through the crisis, it is "fair and necessary" to ask them to contribute, Sunak said.

"It's going to take this country - and the whole world - a long time to recover from this extraordinary economic situation," the chancellor told members of Parliament. "Once we are on the way to recovery, we will need to begin fixing the public finances - and I want to be honest today about our plans to do that."

The U.K. economy has already suffered its deepest recession in more than 300 years, alongside the worst pandemic death toll in Europe. Official forecasts Wednesday confirmed the economy will suffer long-term damage from the crisis, lasting years.

- Income tax thresholds will be frozen for the basic 20% rate and higher 40% rates after next year, potentially dragging more people into paying more tax as their earnings increase in future years. Sunak said he wasn't "hiding" this policy, and argued it will be "progressive and fair."

- The stamp duty holiday, which pauses taxing home sales, will be extended until June 30.

- The furlough wage support program will be extended through September. As businesses reopen, from July, they will be asked for a contribution of 10%, rising to 20% in August and September.

- The 20 pound a-week uplift to Universal Credit welfare payments will be extended for six months.

- Planned rises in alcohol and fuel duty will be canceled.

- The Bank of England is being ordered to drive the U.K.'s goals toward eliminating greenhouse gas pollution.

- The U.K. economy, which shrank almost 10% last year, is forecast to expand by 4% this year, according to the Office for Budget Responsibility.

- The economy will grow 7.3% next year, stronger than forecast, but after five years it will remain 3% smaller than it would have been without the pandemic.

- Gilts fell across the curve on Wednesday after the Debt Management Office announced that it will sell 295.9 billion pounds ($413 billion) of bonds in 2021-22.

"When Chancellor of the Exchequer Rishi Sunak looks back at his March 2021 budget, he'll probably be able to say he got the balance right. He extended significant near-term support to help drive the recovery from the pandemic while deferring most tax increases until the economy has healed," said Dan Hanson, senior economist with Bloomberg Economics.

The extended aid for workers and businesses will help prevent a surge in unemployment. But it will also add to the 300 billion pounds the U.K. has spent fighting the pandemic amid the sharpest contraction since the Great Frost of 1709.

Sunak is aiming to strike a balance between providing short term emergency help for a country still battling to emerge from lockdown, while seeking to reassure markets that he will get a grip on the deficit before too long.

Politically, Sunak is in danger of infuriating his Conservative colleagues who do not want taxes on business to rise and may worry that increased bills for citizens ahead of the 2024 election will cost the party votes.

The economic risk is that planned tax increases and the withdrawal of state support could deter investment and potentially stifle the longer-term recovery.

With that in mind, Sunak also announced measures to encourage investment and incentives for businesses to hire more apprentices. A new "super deduction" policy will be introduced, which will mean that for the next two years when companies invest, they can reduce their taxable income by 130% of the cost of that investment.

"We've never tried this before in our country," Sunak said. Forecasters say the plan will boost business investment by 10%, he added.

The main opposition Labour Party said the chancellor was desperate to slash government aid for those who need it.

"Behind the spin, the videos and the photo ops, we all know the chancellor doesn't believe in an active and enterprising government," Labour Leader Keir Starmer said. "We know he's itching to get back to his free market principles and to pull away support as quickly as he can."

While the national debt has risen past a record 2 trillion pounds, historically low interest rates means the cost of servicing it is low. That gives the chancellor breathing space, although he'll also have an eye on the next general election due in 2024.