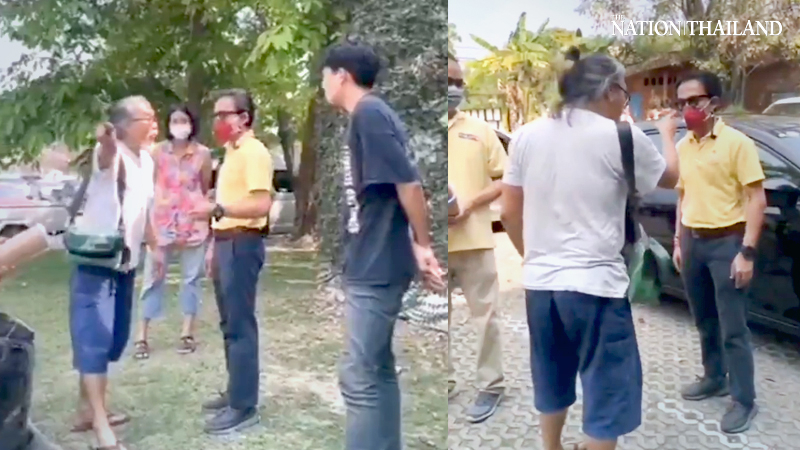 On Monday, a group of yellow-attired people entered the exhibition and began moving some pieces on display to a parked pick-up truck that belonged to the faculty of fine arts.

The installations appeared to be depicting the aftermath of protests.

The executives also ignored students and other officials at the scene who tried to stop them until art professor Thasnai Sethaseree appeared at the scene.

Thasnai immediately began asking the execs to explain themselves, and when they couldn’t, he began attacking them for not appreciating art. The incident was live-streamed on Facebook and went viral.

Some of Thasnai’s statements were widely shared, such as:

“Don’t do this again. This is enough. It is shameful that people like you do not respect freedom.

“A teacher’s duty is to love their students, protect them and their expression of art. We all have strong ambitions but must control ourselves, otherwise, we will be like dogs.”

Eventually, the execs agreed to bring back the pieces they had removed, claiming they thought they were clearing trash. Observers, however, believe this so-called removal was politically motivated and a move to gag the youth-led anti-establishment movement.

“Can art be trash? Does art need to be tidy like bankers’ uniforms?” the professor asked.

Meanwhile, some students filed a police complaint accusing the faculty of robbery after some of their pieces were damaged. The university management has also called on the executives to explain themselves.

On Tuesday, Thasnai wrote on Facebook that many people wanted to befriend him online, but said he wanted time to screen them first.

He also said that he would stand by and support young people who have been intimidated, charged and imprisoned for standing up against the establishment.