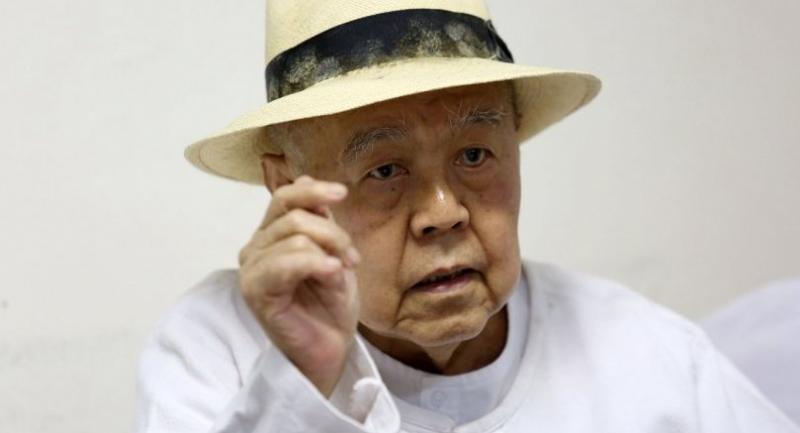 This past week the police decided to charge social critic Sulak Sivarasaka for allegedly violating the lese majeste law by questioning accounts of an episode from the life of King Naresuan 500 years ago.

The decision to charge him comes almost three years after he voiced those doubts. On Monday he was escorted to the Bangkok Military Court for an interview with military prosecutors.

The single combat in which King Naresuan is said to have won victory over Burmese Crown Prince Mingyi Swa, is regarded in Thai mainstream history as a momentous event that freed Ayutthaya from the threat of Burmese rule. Naresuan the Great is revered by ordinary Thais and the military for that putative act of emancipation. The Thai Armed Forces commemorate his victory on January 18, Thai Military Day, although the story is unrelated to modern-day military affairs.

Sulak’s words of doubt departed from that mainstream narrative, and prompted two Army Lt-Generals to file charges of lese majeste against him on October 16, 2014.

The story of King Naresuan’s duel is embraced not just by Thais and their military, but also by the Shan ethnic group fighting for independence in Myanmar.

This underscores the reality that the combat took place centuries before the Thai nation-state came into being and thus cannot be confined within modern political boundaries.

Muay thai is another example of such appropriation. The martial art emerged in our region at more or less the same time as Theraveda Buddhism. Not surprisingly, Myanmar, Laos and Cambodia don’t give it the appellation “thai”.

The same could be said of Songkran: other Buddhist societies that celebrate the festival don’t call it “Thai New Year”.

In fact we co-opt these old region-wide traditions as our own, market them for tourism and pay scant attention to how our neighbours feel about it.

But monopolising the story surrounding King Naresuan is especially damaging because it misguides everyone, especially Thais, into believing there is only one version of history.

Thai authorities discourage any further study of history because for them the official version – or the version that supports the powers-that-be – is the correct one and everything thing else is wrong.

This claim of narrative exclusivity has long been abused by the authorities, with Sulak only the latest to be victimised.

Two decades ago a graduate student questioned whether the historical figure of Lady Moe had actually existed. Angry Nakhon Ratchasima politicians promptly demanded the student be lynched for doubting a tale that had taken on mythical status.

It is bad enough when public figures and lawmakers use their power to silence academic freedom. But in Sulak’s case, it is the authorities themselves that are “killing” the messenger.

Thailand’s history textbooks criticise many Ayutthaya monarchs for failing to protect their kingdom. Why should King Naresuan be an exception? The dismal answer is that he is admired by the military, and the military are now in power.

If the Army and police hold the nation and its institutions in such high regard, they need to stop and think about the actions they take in the name of these revered institutions. Bringing a lese majeste case against Sulak

does nothing to burnish Thailand’s standing, but instead risks exposing

the country to global ridicule.

Article 112 of the Penal Code, reads: “Whoever defames, insults or threatens the King, the Queen, the Heir-apparent or the Regent shall be punished with imprisonment of three to 15 years.”

It was designed to protect living members of the Royal Family, not those from the pages of history. An episode that occurred 500 years ago is not covered by this law.

“If the country was normal and there existed rule of law in this country, then there won’t be problems,” said Sulak.

The fact that the case was not thrown out the minute it was raised three years ago is a strong indication that Thailand’s authorities and many of its citizens have lost any sense of that normality.