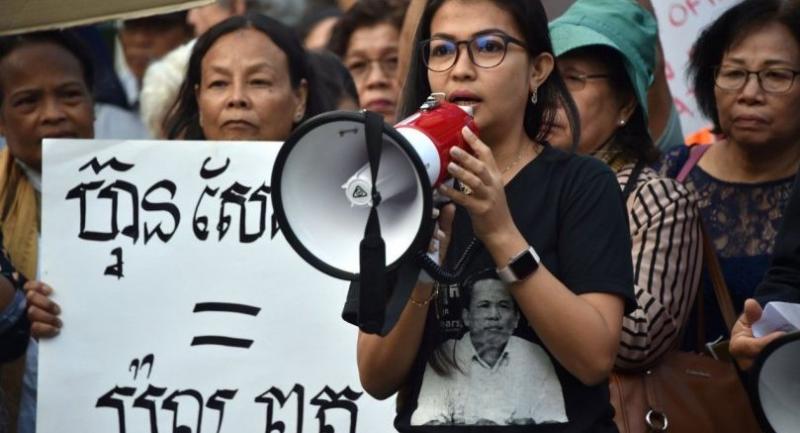 Hun Sen finds a friend amid storm of protest in Australia

From the safety of suburban Australia, Bou Rachna recalls the hours before her husband Kem Ley, a prominent Cambodian political analyst, was shot dead at a Phnom Penh gas station in a 2016 killing that rattled the nation.
They had just finished breakfast together when he left to meet some students for a chat over coffee. She received a call soon after, informing her that he had been gunned down in broad daylight.
“He never did anything for himself,” Bou Rachna says of her late husband. “He did everything for Cambodia, so that it could have freedom, real democracy, independent courts and respect for human rights.”
She and her five children arrived in Australia last month where they were granted asylum after hiding for more than a year in Thailand.
But reminders of the violence that felled Kem Ley have followed them, with death threats mailed to the family ahead of a visit to Sydney by Cambodia’s strongman leader Hun Sen for a special Australia-Asean summit this week.
Australia’s hosting of the summit, which will focus on economic ties and counter-terrorism cooperation, has sparked controversy.
Critics say Australia has a patchy record on rights in Southeast Asia with Human Rights Watch warning that the government should not “dance with dictators”.
While Australia granted asylum to Kem Ley’s family, it also struck a controversial deal with Hun Sen’s government to take in a small number of refugees in exchange for $55 million in aid.
Despite the death threats, Bou Rachna is determined to speak out from her new home, and believes her husband was silenced for his criticism of the Cambodian regime.
Little-known outside Cambodia, Kem Ley was a popular analyst and critic at home, who focused on corruption and land-grabbing that continues to plague the country.
He criticised politicians of all shades, often speaking to rural and urban Cambodians on Khmer-language radio.

Crackdown intensifies
His brazen killing shocked the country, with tens of thousands attending funeral ceremonies and marching through the capital.
Unemployed former soldier Oeuth Ang admitted to the murder and was sentenced to life in prison last year, saying Kem Ley owed him US$3,000. But independent observers say the killing was politically motivated – a throwback to the 1990s and early 2000s when political assassinations in Cambodia were commonplace.
“I didn’t accuse them, but the people in Cambodia know who the killer is behind Chuob Samlab,” Rachna says, referring to a moniker given to Oeuth Ang during his years as a soldier, which in Khmer means “meet to kill”.
Hun Sen’s government has long denied involvement, but for many Cambodians Ley has become the face of resistance against mounting oppression in the country.
The Cambodian strongman, one of the world’s longest serving leaders, has recently tightened a stranglehold on the press, civil society and the only credible opposition, the Cambodia National Rescue Party. The CNRP was disbanded following a court ruling last November after its leader Kem Sokha was arrested on treason charges.
In response, the United States and some European countries reduced aid commitments and put travel restrictions on senior officials and Hun Sen’s family, although China is increasingly filling that void.
“All Hun Sen does is he gets up and he is looking for ways to crush somebody,” Cambodian-Australian Victoria state parliamentarian Hong Lim said.
Lim has long been critical of the regime and has been threatened with violence if he returns to Cambodia.
Hun Sen, a Khmer Rouge defector who has ruled the country for 33 years, met Turnbull yesterday.
“I just met with the prime minister of Australia,” he said. “They provide us financial assistance of $78 million.”
Hun Sen said the $78 million would be “cash assistance” and that other offers of other assistance were made as well.
Any such aid would be at odds with other international moves of late. The US severed aid to the kingdom after the ruling Cambodian People’s Party swept the Senate elections last month in the wake of the opposition’s dissolution.
It is also at odds with demands from opposition politicians and rights groups, both from Australia and Cambodia, which have repeatedly urged Prime Minister Turnbull to take Cambodia to task for its widespread crackdown on political opposition, independent journalism and civil society.
Lim believes Canberra has not done enough to condemn rights abuses in Cambodia, claiming it compromised its values when it agreed to the refugee deal.
“We don’t seem to get the message that we have stooped so low, working with this hideous regime and then trying to secure people to go to that country,” he says. “We Australians are better than that.”

Threat to beat protesters
Hun Sen was confronted by hundreds of protesters in Sydney yesterday, where there is a sizeable population of Cambodian refugees who fled the Khmer Rouge in the 1970s.
Among them were Rachana and a senior Cambodian monk, the Venerable Nou Sorng.
“Hun Sen always take his own people as hostage…using violence, intimidating them,” Nou Sorng told the crowd. “He even threatens his people if they don’t vote for the [Cambodian People’s Party]. They will not develop anything in Cambodia.”
“We can’t describe all Hun Sen’s bad activities,” he said. “He must release [jailed opposition leader] Kem Sokha and reinstate the CNRP back to politics.”
Ahead of the regional summit, Hun Sen sparked a storm by reportedly threatening to “beat” any demonstrators and warned he would “shame” Australia and block the release of a joint communique if he was embarrassed in any way.
Rachna holds out little hope that justice will prevail for her husband, and fears she may never be able to return to Cambodia.
“We cannot return at this time unless there is a change in our Cambodia,” she says.