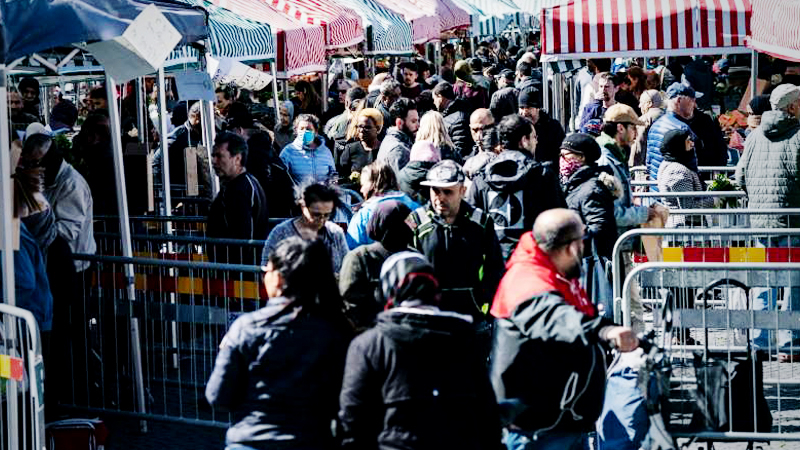 By Special To The Washington Post · Gina Gustavsson · OPINION, OP-ED

"Be like Sweden!" - this slogan appeared on a sign last weekend in Minnesota, one of several U.S. states where protesters are pushing governors to roll back lockdown orders. Sweden, unlike the United States and many other countries, has largely stayed open for business. Pandemic experts have criticized this approach, combining a handful of restrictions with strong recommendations for risk groups and anyone feeling sick to self-isolate, and voluntary social distancing for everyone else.

So why does Swedish public opinion continue to show not just high but increasing levels of support?

As of April 30, Sweden ranked among the 10 countries in the world with the highest covid-19 deaths per million people, with a ratio of 244. This is seven times more than neighboring Finland and Norway. While an essential part of Sweden's strategy was to cocoon the elderly, two thirds of the nursing homes in Stockholm are now infected. Estimates of 10,000-20,000 deaths are no longer off the table.

Private citizens have flooded the head offices of Sweden's Public Health Agency with flowers. Trust in the agency has risen to 73 percent, in fact. In one month, trust for the government has increased by 23 percentage points.

The face of chief epidemiologist Anders Tegnell adorns coffee mugs and T-shirts. This is the man who gives daily updates on the number of deaths in Swedish television. His "fan club" and "support" groups on Facebook have more than 100,000 members, in a country with a population of approximately 10 million. A majority of Swedes - 63 percent, according to one recent poll, support the measures Tegnell's agency has recommended that Sweden follow.

Can trust explain why Swedes are so supportive of Sweden's coronavirus response despite the relatively high death rate? Swedish authorities and academics have repeatedly reminded everyone that Swedes trust each other, and they trust their institutions. But so do Danes, Norwegians and Canadians - and those countries responded more forcefully to the pandemic threat.

What we are witnessing in Sweden is more likely to be the dark side of nationalism. To be sure, many Swedes who now say "let Sweden be Sweden" are staunch supporters of wider immigration and international cooperation. But such convictions are no vaccine against the psychological forces of nationalism.

Like any group identity, national identity is a powerful force. In "Liberal Nationalism and Its Critics," other contributors and I show how national identity can charge both the best and worst sides of human behavior. In a recent research article, I argue that when self-critical and based on a shared public culture, nationalism can legitimately be liberal or even progressive in nature. But when it takes the form of blind allegiance, nationalism becomes a danger to liberal democracy.

In research with Ludvig Stendahl, I find a strong link between taking pride in one's nationality and having confidence in the political institutions in one's country. This holds true even when controlling for socioeconomic factors and overall political beliefs.

In Sweden, those who say they are "very" or "quite" proud to be Swedish comprise 92 percent of the population. Compared to the neighboring countries, pride in the economy stands out. The "very proud" of their economy in Sweden are 18 percent. In Denmark and Finland they are 10 percent and 7 percent, respectively.

Both high pride and political trust can greatly benefit a society. But my work also shows that national pride erodes economic solidarity within the country.

High pride can turn into blind faith, if not balanced by a commitment to national self-critique. Scholars call this critical or constructive patriotism. When the coronavirus crisis escalated, I therefore examined Swedish attitudes to this, using the most recent data available (2013).

Sweden has the lowest number of critical patriots out of all the 33 countries included in this survey, which covers nationally representative samples from Europe, America and Asia (and South Africa). Only 6 percent of Swedes agree strongly that "the world would be a better place if Swedes acknowledged Sweden's shortcomings." Although another 30 percent agree with the statement, this is still less than in Hungary or Russia.

Swedes have gotten used to international praise for their welfare state, solidarity with refugees and climate change activism. In the ISSP survey from 2013 they also express stronger pride in their democracy than people in many other stable democracies. Now, suddenly, international experts and media from abroad suggest Swedish citizens might be reckless and callous.

This situation is likely to have triggered a national identity threat in the minds of many Swedes. This comes in addition to the health and safety threats already posed by the virus itself and the concomitant economic crisis.

The problem is that threat and nationalism often prove a lethal mixture. In safe and secure times, those who think their country is superior to others, or beyond critique, pose little risk for democracy. But when they perceive a threat to their country, they become aggressive. British thinker Isaiah Berlin called this the nationalism of "the bent twig": it lashes out against anyone who steps on it. In northwestern Europe, including Sweden, research has shown that this happens not just with ethnic but also with civic conceptions of nationhood.

In Sweden, there are signs that this process may already be in motion. Critics of the Swedish pandemic strategy meet with hostility and ridicule, both in academia and the media. Vulnerable minorities might be next in line. Ex chief epidemiologist Johan Giesecke, for instance, pinned the failure to protect the elderly on immigrants. "Many of the people working in nursing homes are from other countries, they are refugees or asylum seekers," he explained. They "may not always be understanding the information."

Wounded national pride, it may turn out, is a disease that Swedes, however rational, are no more immune to than anyone else.

Gustavsson is an associate professor at the Department of Government, Uppsala University, and an associate member of Nuffield College, University of Oxford. Her research focuses on liberal nationalism and the social effects of national identity. Together with David Miller she is the co-editor of "Liberal Nationalism and Its Critics: Normative and Empirical Questions" (Oxford University Press 2019).

For other commentaries by political scientists from universities around the country, see www.washingtonpost.com/blogs/monkey-cage