The Culture Ministry is ramping up conservation efforts at archaeological sites in Phetchabun and Buri Ram after Unesco placed them on its world heritage waiting list.

The Unesco World Heritage Committee included Si Thep Historical Park in Petchabun and the Ensembles of Phanom Rung, Muang Tam and Plai Bat Sanctuaries in Buri Ram on this year’s tentative list at its June 30-July 10 meeting in Azerbaijan.

“The Culture Ministry’s Fine Arts Department will prepare proposals on the two archaeological sites for Unesco to consider. We hope Thailand will conserve and develop the sites and then present the proposals for inclusion on the World Heritage List by 2023,” Department director general Anandha Choochote told The Nation after attending the meeting in Azerbaijan.

Anandha will next week gather his team of archaeologists, historians and cultural experts to draft a three-year plan for management of the sites.

“First we will designate buffer zones to protect the archaeological sites,” he said.

A race to save Petchabun’s ancient city of Si Thep began in March when locals led by a group of archaeologists and cultural experts protested plans to drill for oil near the historical site.

With the world heritage honour hanging in the balance, the Fine Arts Department in March began drawing up plans to save ancient Si Thep from drilling.

Our archaeology team is working on delineating a buffer zone at Si Thep Historical Park before the end of this year,” revealed Anandha.

The zone will expand the conservation area to cover the Khao Khlang Nok stupas.

“The department needs to define the extent of the historically significant landscape around Si Thep, and that requires knowing how far the archaeological structure spreads, both visible and non-visible,” she told The Nation in March.

The Khao Klang Nok site was unearthed between 2014 and 2017, revealing the main stupa of red laterite brick, 20 metres high and 4,100 square metres at the base.  Archaeologists believe it was constructed during the Dvaravati era in the eighth or ninth century, making it the largest stupa of that age ever found in Thailand.

“Si Thep was a cosmopolitan hub during the first millennium of the modern era,” explained Phacharaphorn.

“It was a junction connecting cities in the Chao Phaya River basin to the Korat Plateau. Si Thep became a melting pot for two distinctive cultures – the Dvaravati and the ancient Khmer.

The ancient city arose from a prehistoric settlement, where evidence of domesticated dogs and elephants has been found. It lasted well over 800 years.

“Si Thep was a massive city, with a population of 80,000 at its peak, which puts it in the range of large centres like Bagan [in Myanmar]. You could easily fit ancient Ayutthaya or Sukhothai within Si Thep’s encircling moats.”

The new buffer zone ordered by Fie Arts Department chief Anandha should limit damage to undiscovered treasures and serve as a barrier against pollution from heavy industrial activities that is often harmful to heritage sites.

“The zoning should incorporate surrounding landscape like mountains, rivers and canals as well as ancient local communities,” Thanongsak told The Nation.

“It must link in the sacred mountains of Phanom Rung, Plai Bat and Phu Angkarn – where archaeologists have unearthed lots of Buddhist statues and sculptures dating back to 7th century,” he added.

Thanongsak is a member of Culture Ministry’s ad hoc committee for retrieving Thai artefacts looted and taken overseas. Thailand is now in the process of reclaiming dozens of Buddhist statues and sculptures from the galleries of leading US Museums – many of them originating in the Buri Ram sanctuary complex.

“Among them is an eighth-century bronze preaching- Avalokitesvara Buddha statue from Prasat Hin Khao Bat II in Buri Ram, which is currently at [New York’s] Metropolitan Museum of Art,” Thanongsak revealed, adding that more are kept at the Asian Art Museum in San Francisco.

“To be sustainable, heritage development needs cooperation between different government agencies.  Also, the Culture Ministry cannot conserve and develop ancient sites without the involvement of the local community.” 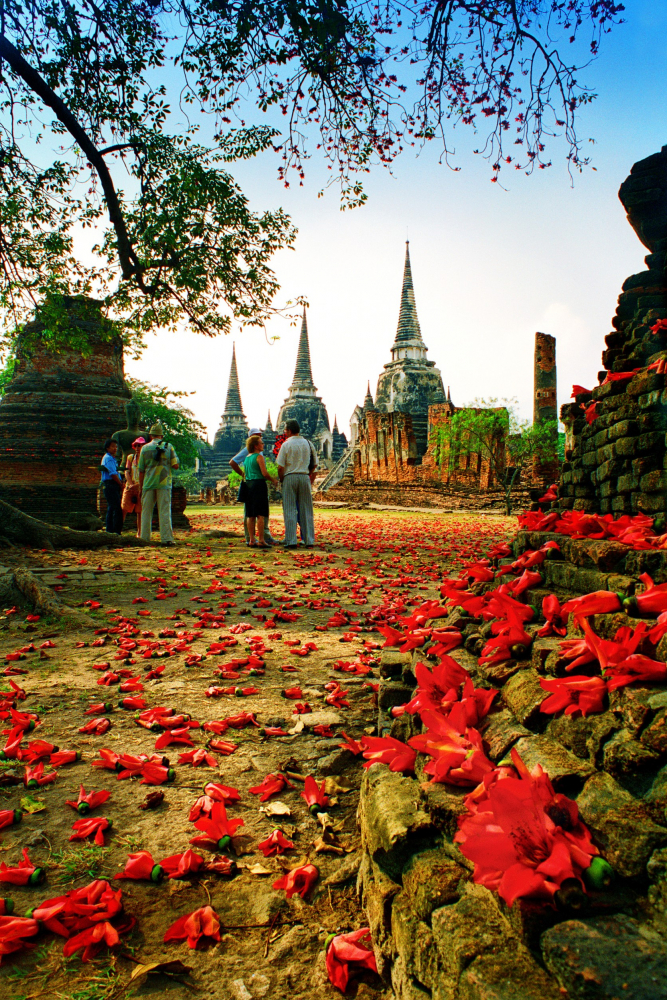 Unesco advised Thailand to extend the buffer zone and boundaries of Ayutthaya’s historical park to preserve remnants and artefacts of the old kingdom. Photo courtesy of Culture Ministry

Unesco delegates in Azerbaijan also advised extending the buffer zone and boundaries around ancient Ayutthaya, which gained world heritage status in 1991. The Committee asked Thailand to submit a plan for sustainable development of the site by December 2020, proposing inclusion of a World Heritage Centre.

Two years ago, Unesco threatened to withdraw world heritage status from Ayutthaya over new constructions encroaching into the heart of the site. The Fine Arts Department responded with a 10-year plan (2018-2027) for the park’s management, which focused on protecting its ancient monuments from severe flooding last seen in 2017.

“The World Heritage Committee was satisfied with the overall actions taken by authorities to improve conservation of the sites and address problems such as vendor intrusion, which put the Ayutthaya Historical Park at risk of being stripped of its status,” Anandha said.

However, the committee also asked that authorities demolish buildings belonging to Phranakhon Si Ayutthaya Rajabhat University, which are located inside the World Heritage Site.