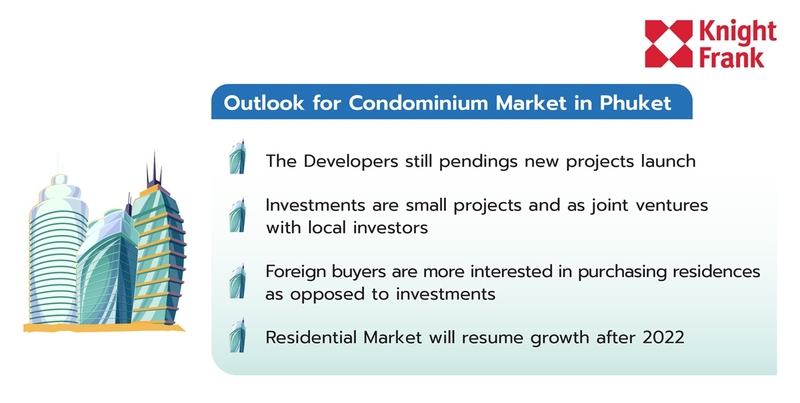 As one of Asia’s best tourism destinations, and Phuket's increasing tourist numbers each year, property business was among the sectors that grew continuously, says 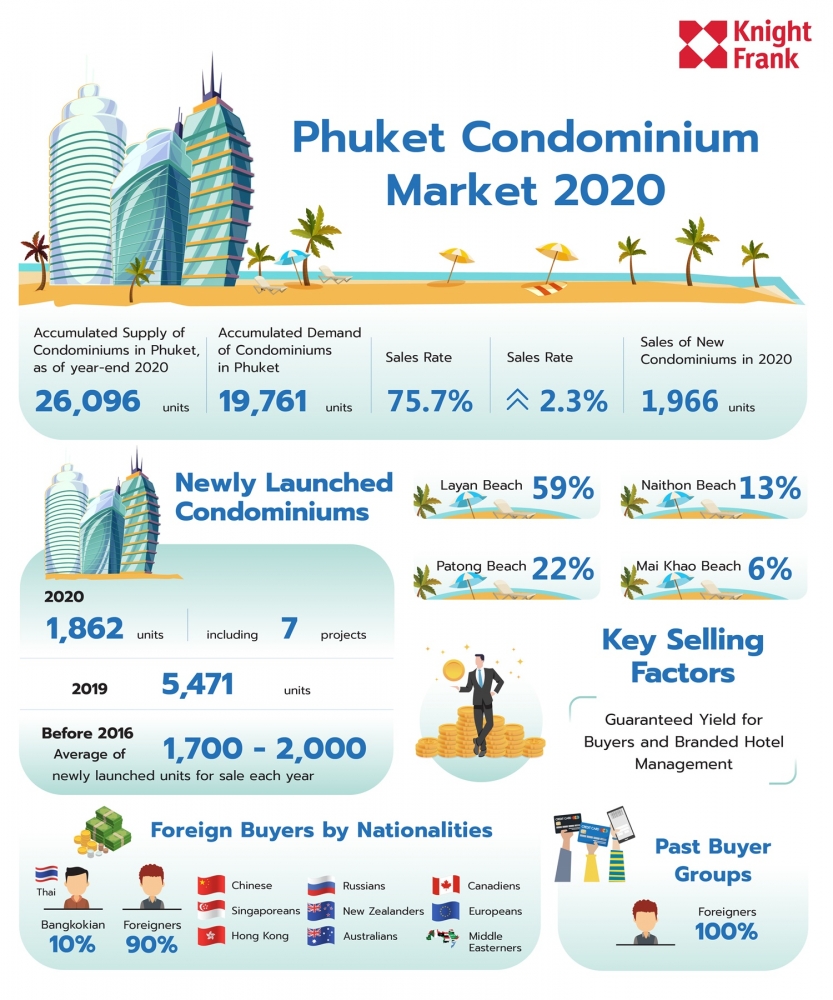 The large number of foreign tourists visiting each year includes a large group that has started to look at condominiums to buy, so they can have a place to stay when they visit Phuket.

Some also sought additional rental income when they were not in residence. For these reasons, the real estate business in Phuket drew great interest of investors as they saw foreign tourists being a main source of purchasing power.

Also, Thai investors turned their attention to the market. Condominium projects that launched in Phuket were the types that focused on rental returns, and such projects invited hotel brands to manage the properties, which boosted the reputations of the projects.

From the rental yields received, Phuket became an attractive place to buy condominiums for investment. However, the Covid-19 pandemic drastically reduced the volume of tourists, as they could not travel. Heavily reliant on tourism, the economy of Phuket came to a halt and became sluggish, Nattha said.

The real estate sector of Phuket was directly affected. Even though Thai tourists continued to come, they were not enough to revive the economy of the island, he said. 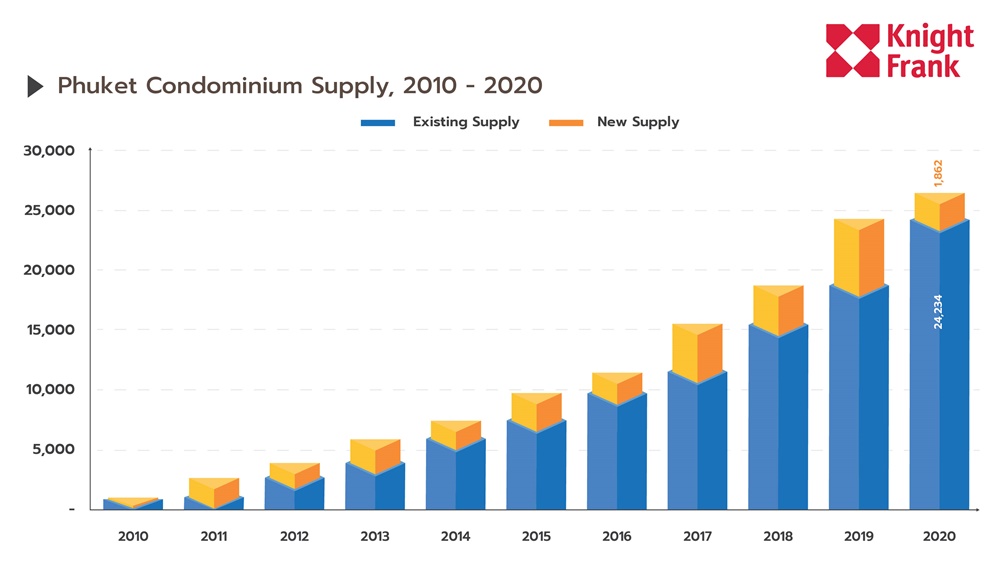 At the same time, however, there were new condominiums launched for sale; such operators believe that many tourists and investors would continue to fuel demand for condominiums when the situation returns to normal.

According to research results of Knight Frank Thailand, it was found that at the end of 2020, the total supply of condominiums in Phuket stood at 26,096 units.

From a supply of 5,471 newly launched condominium units in 2019, this dropped to just 1,862 units in 2020. This significant drop in new supply is attributed to the Covid-19 outbreak, which has severely affected demand. Developers therefore delayed the launch of projects. Moreover, commercial banks became concerned about the uncertainty of the situation, and implemented tight controls in lending for project development. Therefore, developers suspended the launches of projects.

In 2020, new condominium launches were mostly in Layan, at 59 per cent, followed by the Patong and Naithon Beach areas, accounting for 22 per cent and 13 per cent, respectively.

The Mai Khao Beach area contained the smallest number of new condominium launches, at only 6 per cent of the total supply. Mai Khao, an area in the north of Phuket, is not yet very popular as it is far from amenities, compared to other beaches. As a result, Mai Khao has quite a lot of land available.

There are around 6,335 units left for sale. The number of new condominiums sold in 2020 was only 1,966 units, which has decreased from 2019's 4,036 units. This decrease is due to the lack of foreign tourists, a major source of purchasing power, who were unable to enter the country because of the Covid-19 pandemic. Phuket was severely affected, whether it was tourism, employment, or even real estate. 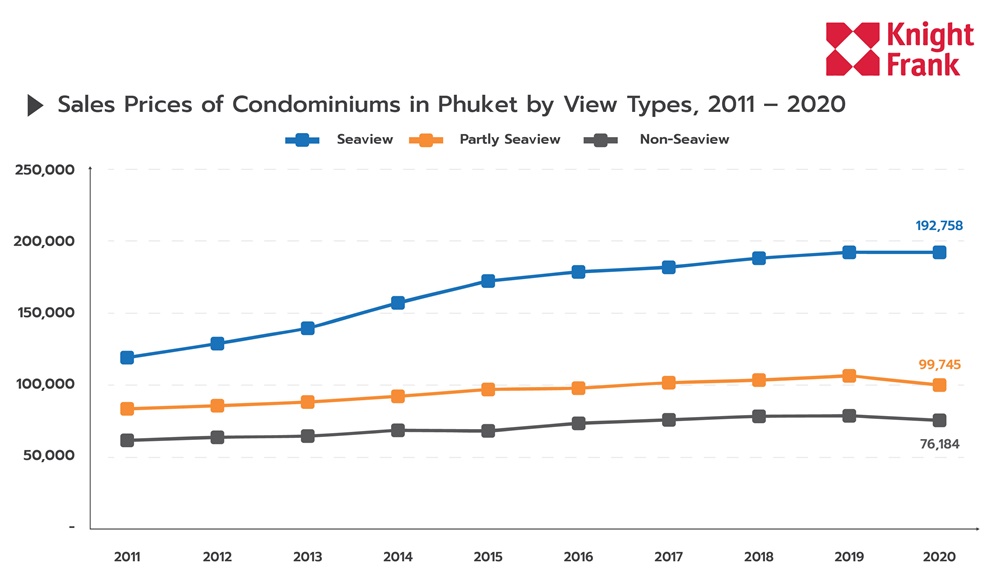 There were some condominium projects that had to stop sales or had low sales. Moreover, they have been unable to apply for loans from financial institutions who are now quite strict in lending for condominium developments.

In addition, there are some projects that have stopped selling, opting to wait and see. Due to Covid-19, foreign tourists are unable to come to Phuket and they comprise the group of condominium buyers in Phuket.