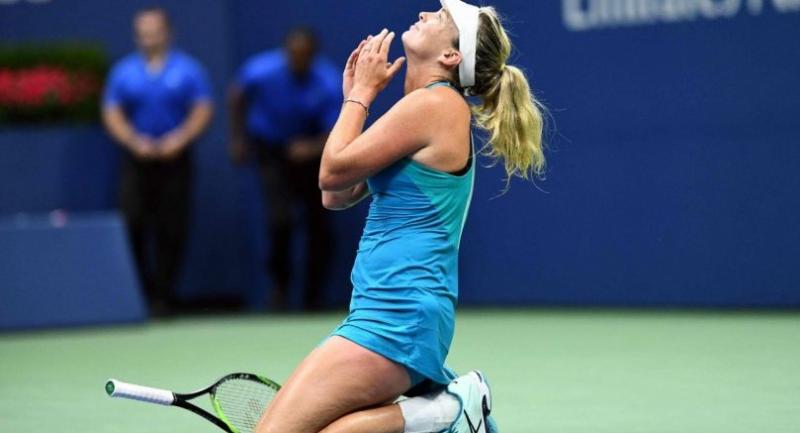 CoCo Vandeweghe of the US celebrates defeating Czech Republic's Karolina Pliskova during their 2017 US Open Women's Singles Quarterfinal match.

Vandeweghe's victory means that the US Open will have an all-American semi-final line-up for the first time since 1981 if Madison Keys defeats Estonia's Kaia Kanepi later Wednesday.

"I won the juniors here when I was 16 and dreamed of playing on the real stage," said 25-year-old Vandeweghe, who also made the semi-finals at the Australian Open, beating then world number one Angelique Kerber in the process.

The last time four US women were in the semis was 36 years ago when eventual champion Tracy Austin, Chris Evert, Martina Navratilova and Barbara Potter all made it.

Pliskova, who had to save a match point to beat China's Zhang Shuai in the second round, needed to fight back from breaks down in both sets to keep her challenge alive.

But a final break from the American for a 4-2 lead in the second set proved decisive and the match was hers when Pliskova buried a return into the net.

"I just don't care about this," she said. "I didn't choose to be at this position where I am now. There are many more Grand Slams to come. I believe I can win one."

Should Nadal lose and Federer defeat Juan Martin del Potro, then the 36-year-old Swiss will reclaim the world number one spot he last held in November 2012, becoming the oldest leading man.

Rublev, the world 53, is bidding to be the youngest semi-finalist in New York since Lleyton Hewitt in 2000.

Federer faces Del Potro for the first time in New York since the towering Argentine rallied from a set and a break down to shock him in the 2009 final.

Del Potro had also crushed Nadal in straight sets in the semi-finals.

"I felt like that I left that match with a lot of regrets. Probably feels like one of those matches I would like to play over again," said Australian Open and Wimbledon champion Federer.

Del Potro, who saved two match points to defeat sixth seed Dominic Thiem from two sets down in a fourth-round thriller, has been plagued by injury ever since his moment in the New York spotlight eight years ago.

He has undergone four wrist surgeries and missed 10 Grand Slams.

At one stage last year, his world ranking slumped to 1,045 and he even considered retiring.

Should Nadal and Federer both win, then they will meet for the first time in New York in Friday's semi-finals.

They have come close to facing off under the lights of the 24,000-capacity Arthur Ashe stadium on five previous occasions when they were just one match away, only for one of the two to lose.

Back in 2008, legendary boxing promoter Don King, never short of hyperbole, dubbed the potential clash as "Grapple in the Apple."

Keys looks to make her second Slam semi-final after the 2015 Australian Open, having knocked out fourth-seeded Elina Svitolina in the last-16.

Kanepi, a six-time quarter-finalist at the Slams, has battled back from crippling foot injuries and a debilitating virus, which has limited her to just five events in 2017.

Last year, the former world number 15 played just one tour event and she came into the US Open at 418 in the world.

Victory over Keys would make her just the third qualifier to reach a semi-final at the majors after Christine Dorey at the 1978 Australian Open and Alexandra Stevenson at Wimbledon in 1999.