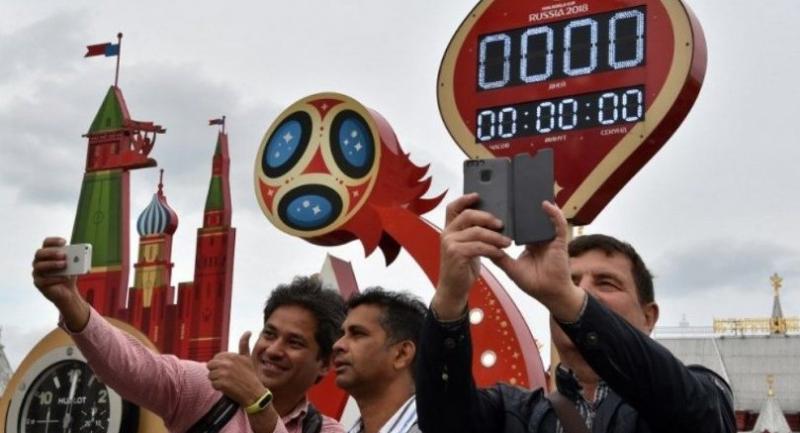 People take selfie pictures, with their mobile phone, in front of the digital FIFA World Cup 2018 countdown clock placed near the Red Square and the Kremlin, in Moscow.

The World Cup hosts showed nerves of steel and ruthless finishing in thumping Saudi Arabia 5-0 in the tournament's opening match before an anxious crowd of nearly 80,000 in Moscow's Luzhniki Stadium on Thursday.

The emphatic result transformed the men in red from villains to heroes and gave Russians a rare sporting reason to rejoice.

It came at Luzhniki Stadium -- the crucible of both Russian and Soviet sport -- with the weight of an expectant but sceptical nation on their shoulders.

"The head of state called me and congratulated me," Russia's moustachioed manager said matter-of-factly after the match.

Putin "told me to keep playing the way we were, to keep going."

"Give me five!" Moscow's Sport Express newspaper exclaimed in a front-page headline. "Russia, we love you!"

It was not always like this for Cherchesov and his charges.

The team entered the tournament without tasting victory in more than eight months.

They had registered just one shot on target in their last two World Cup warmups.

Four of Russia's defenders and a starting forward had been ruled out for the tournament with injuries.

One Moscow news website dubbed the matchup between the 70th-ranked Russians and the 67th-ranked Saudis -- the two worst teams in the tournament -- as "Bad vs. Worse".

Cherchesov kept fiddling around with formations and few could tell which players he would start once British pop star Robbie Williams finished belting out his opening ceremony set.

It all worked out in the end.

But it will all get that much harder from here on out.

"It could have easily been 1-1 if we were not careful," said Cherchesov.

"And our opponents will be getting stronger by the match."

Russia next play Egypt on June 19 in Saint Petersburg and finish off Group A against two-time World Cup winners Uruguay in Samara on June 25.

They are still not guaranteed the top-two finish that would ensure they do not join South Africa as only the second World Cup host nation to fail to qualify from their group.

And the Egypt match got that much bigger with the return to fitness of Mohamed Salah ahead of the Pharaohs' own clash on Friday with Uruguay.

Salah has not played since injuring his shoulder in Liverpool's Champions League final loss to real Madrid.

If fit, he is precisely the type of clinical finisher to give Russia's hobbled defence nightmares.

And Cherchesov's problems in the back were already so dire that he had to ask 38-year-old Sergei Ignashevich to come out of international retirement for one last curtain call.

Ignashevich started on Thursday but rarely had to touch the ball against the Saudis.

He and goalkeeper Igor Akinfeev can expect to be far busier with Salah leading the Egyptian charge.

Yet Russians are still riding a wave of jubilation and the World Cup is off to a scintillating start.

"I was really worried, but it turns out we are not that bad!" store manager Anton Irofeyev said, summing up the mood of many Russian fans.

Tags:
Russia have proved the doubters wrong -- for the moment. Russia have