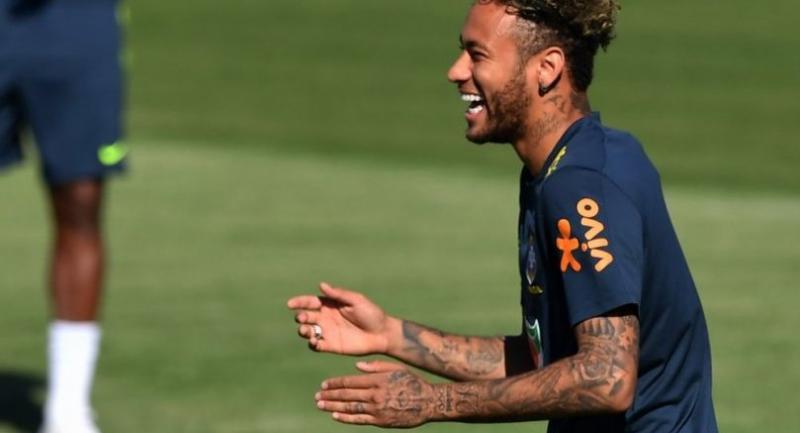 Brazil's forward Neymar takes part in a training session of the Brazilian national football team at the Yug Sports stadium in Sochi.

For three months, a whole nation feared it might not happen, but Neymar will take to the field with his Brazilian teammates when they kick off their World Cup campaign against Switzerland on Sunday.

The world's most expensive player appears to have recovered fully from the fractured foot that required an operation in March, with the only slight concern being his possible lack of match fitness.

Since suffering the injury in Paris Saint-Germain's game against Marseille in late February, Neymar has managed just 129 minutes on the field.

But those minutes came in Brazil's recent warm-up friendlies, with a goal from the bench against Croatia and then a brilliant strike in a win in Austria last weekend.

"After three months, and having played just a game and a half, he is already playing at a high level. Nobody expected that. Not even him," Thiago Silva, a close friend of Neymar's and a club teammate at PSG, said in a report on Brazilian website Globoesporte.

The 26-year-old, who saw his time on the sidelines as one of the lowest points in his career so far, has looked in excellent spirits this week as Tite's Brazil squad settle into their Russian base -- the speculation about his club future, and links with Real Madrid, seem far away right now.

Neymar has been laughing and joking with his teammates on the training pitch in the Black Sea resort of Sochi, and took time to sign autographs and pose for pictures with supporters at an open training session on Tuesday.

He will be in the starting line-up in Rostov-on-Don, for what will be his first game at a World Cup since being taken off with a fractured vertebra in Brazil's win against Colombia as hosts in the 2014 quarter-finals.

And Neymar's importance in this new-look team -- he is one of only six survivors from four years ago -- is clear from the comments of his teammates in Sochi.

"Neymar is great, thanks to God," goalkeeper Alisson replied to one question about their talisman, while Gabriel Jesus spoke of his admiration for the former Barcelona man.

"I got to know Neymar personally at the Olympics. He treated me very well, and not only me, also my family and friends too," he said.

"He is important off the field as well. He is always giving advice. That is very important. I really believe that having a good relationship, considering one as a brother, lifts you on the field. You run more for your friend."

Brazil came to Russia among the favourites as they look to put firmly behind them the 7-1 semi-final humiliation against Germany four years ago.

While fellow contenders Spain have threatened to implode with the sacking of coach Julen Lopetegui on the eve of the competition, Neymar and the Brazilians are relaxed and at home in pleasant surroundings in Sochi.

The lush green coastline and sea views are reminiscent of Brazil, the Selecao have been enjoying dining with views out over the Black Sea, and they also have access to the beach.

It augurs well for Tite's side as they prepare to face a Swiss outfit ranked sixth in the world in their first Group E game before tackling Costa Rica and Serbia.

Winning a sixth World Cup is the objective, but Neymar will also have personal aims.

Last weekend he scored his 55th international goal, moving level with Romario in Brazil's all-time list. There are now only two players left ahead of him.

A great tournament and he could catch Ronaldo's tally of 62, before eventually targeting the 77 scored by Pele.

"I would say that it's going to happen. Neymar doesn't just have playing well as an objective, he is always looking to score goals," Ronaldo, in Russia on media duty, told Brazilian television.