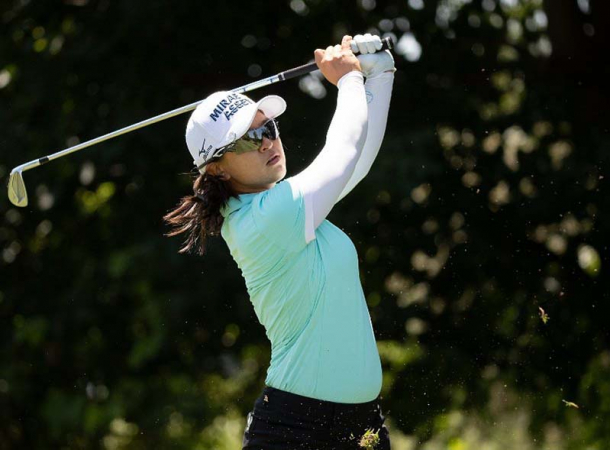 The leaderboard at the 2019 Marathon Classic presented by Dana appears to be wide open heading into the final round with six players within five shots of Sei Young Kim’s lead at 16-under par.

Lexi Thompson (-15) tied the round of the day Saturday as she capped off her 6-under par round with an eagle in front of a huge gallery in Sylvania, Ohio.

With winds gusting up to 20 miles per hour in the afternoon, Highland Meadows Golf Club played a bit trickier on Saturday. Leader Kim struggled to adjust to the wind on her front nine with bogeys on the two par-3s, before she settled in on the back nine with four birdies coming in.

“It was a little tough to judge the distance,” Kim said of the conditions. “I mean, wind very gusting, on and off. So after that couple hole I miss second shot distance, and then I try to setting my mindset. And then just committed every shot, and, yeah, back nine I got a lot of birdie chance and then I make the four birdie.”

Thompson’s ball striking has been nearly flawless as she has only missed three greens in regulation this week, but she’s not putting too much pressure on herself to chase down Kim and capture win No. 12 on Sunday.

“Honestly, I'm not really thinking about any other players,” Thompson said. “It's hard to because you're playing with them and then there are leaderboards, but I try not to look at any leaderboards. I've just been trying to focus my game, my attitude, just everything I can control. I can't do anything about what they're doing. I can just control my game. If I make the birdies, great. Put the pressure on them. If I don't, it's golf. It's not my life.”

2019 LPGA rookie and 2019 U.S. Women’s Open champion Jeongeun Lee6 is well within striking distance for a Sunday charge at 12-under par.

“Tomorrow I just want to focus on my iron shots,” Lee6 said after a third-round 69. “Like I said, my tee shots were not that great, so I'm going to focus on where I want to land it and just control my iron shots, hit the best shots I can.”

Toledo native Stacy Lewis is tied for fourth alongside Carlota Ciganda and 2019 rookie Jennifer Kupcho at 11-under par.

THOMPSON GETS AFTER IT IN ROUND 3

Lexi Thompson fired a 6-under 65 on Saturday to -15 total, placing herself in solo second, one shot behind Republic of Korea’s Sei Young Kim heading into the final round. Thompson hit 17 of 18 greens for the three consecutive rounds, only having missed three greens in regulation, which she credits her two-week break.

“I played well my last five-week stretch and then took a really nice two weeks off. Just stayed at home, relaxed, hung out with my family and friends. I think that's what I needed, and to just come out with a fresh start,” said Thompson, seeking the 12th win of her career. “I just wanted to keep my swing in the groove because I was hitting it well before I took the break.”

Thompson’s front nine started with a bogey on the first hole but was followed up with birdies on Nos. 2, 4-5, 8-9 and then parred every hole after making the turn until she capped off her round with a closing 20-foot eagle putt on No. 18.

“I don't know what position I was at, but it was needed,” said Thompson after her round, of the eagle on 18. “I missed a few coming in, so those were needed as well. I mean, it's golf. I had a lot of shorter putts today than the other days. I got to the last one and I'm like, I'm not leaving it short. I'm going after it.”

With her ninth career victory, Kim would tie Na Yeon Choi for the fourth most wins by a Korean player in LPGA history; only Se Ri Pak (25), Inbee Park (19) and Jiyai Shin (11) have more wins

Jeongeun Lee6 would earn her second career victory; she previously won the 2019 U.S. Women’s Open presented by the USGA

Through the third round in Sylvania the following players would punch their tickets to the major championship: Jennifer Kupcho, Pavarisa Yoktuan, Dana Finkelstein,Youngin Chun and Tiffany Joh.