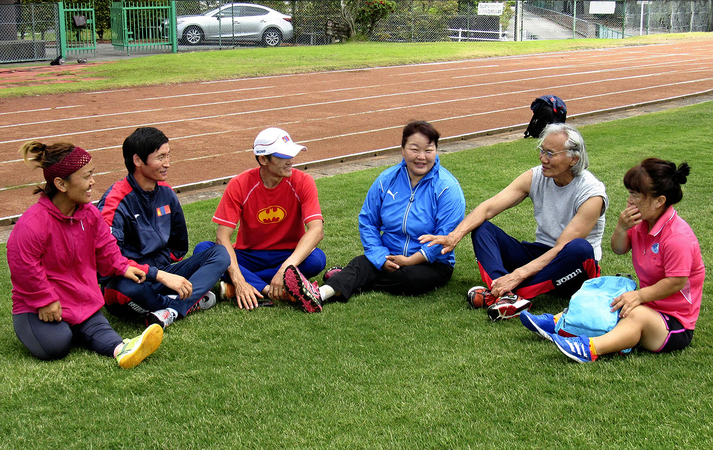 Members of Mongolia's Paralympic athletics team meet after training in Yaizu, Shizuoka Prefecture, Japan, on May 19, 2020. MUST CREDIT: Japan News-Yomiuri

A Mongolian athletics team training for the Tokyo Paralympics has been stranded in Yaizu, Shizuoka Prefecture, for more than three months now with no prospect of being able to return home because of the coronavirus pandemic.

The athletes have received encouragement from locals and the team now refers to Yaizu as its "second hometown."

Yaizu is a host city for Mongolian athletes training for the Tokyo Paralympics. A Mongolian team of four athletes, its coach and manager have been training at a stadium in the city since Feb. 14.

To secure a position at the Paralympic Games, the team was supposed to participate in an international championship that was scheduled to be held in the UAE on March 11. However, the competition was canceled because of the pandemic.

Moreover, routes to Mongolia were canceled and the country's chartered flights were full, leaving the team unable to return home

The athletes have been training while staying at a hotel in the city. According to Enkhbaatar, the team's manager and athletes initially said they wanted to go home, but are now trying to keep a positive spin by talking with their families through videoconferencing.

The locals have also been a source of support for the athletes. After seeing the news about the difficulties the athletes faced in trying to get home, nearby residents have been offering them strawberries, sweets, face masks and portraits of the athletes to encourage them.

"Unlike Mongolia, there's an ocean here, and we now like Yaizu so much because it's warm and you can see Mt. Fuji," said Garmaabazar, a middle-distance runner. "We want to say that we've found our second home country."

Meanwhile, Kazuko Suzuki, chair of the city's international friendship association said, "We consider them to be a part of the community. We hope they'll enjoy the sea and make a lot of memories here."