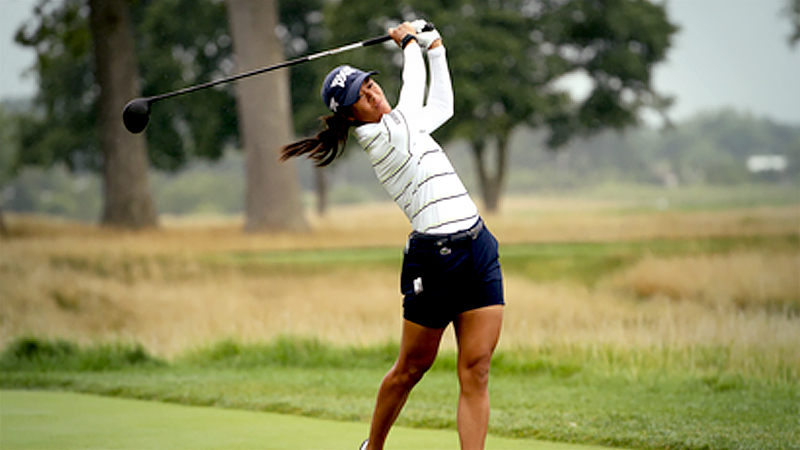 With one round to go at the LPGA Drive On Championship, three names are at the top of the leaderboard, looking to become the LPGA Tour’s first winner since February.

After a 45-minute rain delay at Inverness Club, first-round leader Danielle Kang holed a spectacular bunker shot at No. 12 to take a two-stroke advantage over the field. But with consecutive bogeys at 13, 14 and 15, she made a clutch birdie at No. 17 to pull into a three-way tie for the lead at -5 with Celine Boutier and Jodi Ewart Shadoff.

“During the weather delay I talked to my coach, Butch Harmon, and he was saying, ‘Hey, you're doing great. Just keep it up.’ I go, ‘What are the scores at?’ Because I felt like I was struggling. I was kind of behind the field. He's like, ‘You're doing fine,’” said Kang. “So after I made couple birdies. I know I made some mistakes there, too. But no matter how easy some shot may seem, I don't think it's playing as easy as I think. It's just a bit frustrating.”

Boutier, who were born in FRance to Thai parents, and Ewart Shadoff teed off in the morning wave and did not experience the rain until late in their rounds. Those who played in the afternoon endured a full 18 holes of rain and chill.

“I think we got the best end of the draw by the looks of it,” said Ewart Shadoff, who is looking for her first LPGA Tour victory. “But the last four holes are pretty tough, so, yeah, pretty happy with my round considering the weather and the course setup.”

Second-year player Sarah Schmelzel and 2020 LPGA Tour rookie Yui Kawamoto are tied for fourth at -3. Four players are tied for sixth at -2, including Rolex Rankings No. 8 Minjee Lee.

The cut came at +6, with 78 players moving to Sunday’s final round. It was the highest cut since the wind-shortened 2018 Pure Silk-Bahamas LPGA Classic, which also had a +6 cut.

The LPGA Tour is competing for the first time since Feb. 16, 2020, when Inbee Park won the ISPS Handa Women’s Australian Open. The LPGA Drive On Championship is the fifth event of the season and the first of two consecutive events in Toledo, Ohio. Next week, the Tour will take to Highland Meadows Golf Club for the 35th playing of the Marathon LPGA Classic presented by Dana.

FROM TEXAS STATE OPEN WIN TO DRIVE ON, BOUTIER’S PLAY IS SOLID

In June, while the LPGA Tour was still sidelined during the quarantine, Celine Boutier returned to the golf course in style, winning the Energy Producers, Inc. Texas Women’s Open. She also captured a win on the Women’s All-Pro Tour, meaning the Frenchwoman comes into this week’s LPGA Drive On Championship as arguably one of the most prepared players on the course.

“I was purposeful about, you know, playing within a decent amount of range before the first tournament on the LPGA so that I wasn't too rusty before I started,” said Boutier, who has a U.S. base in Dallas. “I feel like I did handle it pretty well because it also kept me motivated to practice. You know when you don't have tournaments for three months, sometimes you don't even want to go to the course. So the fact that I had a couple tournaments -- I think I played like three of them the past two months -- so the fact that I had something to look forward to and some kind of competition going was kind of nice.”

Those successes aside, the second round at Drive On produced challenges that have nothing to do with Boutier’s extensive preparations – bad weather. But Boutier, who grew up playing in tough conditions, didn’t seem to pay the rain too much mind.

“Obviously I prefer it dry and sunny, but I feel like I can handle tough weather conditions pretty well,” said Boutier with a laugh. “Like in Europe it's not always great weather, and I played it Great Britain quite a bit. So I feel like whenever the conditions are tough I kind of actually like it, even though I don't really like enjoy it per se. It's a good challenge and I think especially on this course you have to be very, very smart.”

Boutier emerged as a star for the European Solheim Cup Team in 2020, going 4-0-0 and leading the squad to victory. She can’t help but think about next year’s competition, which will be held at Inverness Club, the host venue of the LPGA Drive On Championship.

“During the practice round, I was kind of trying to picture what it would be like. I think it's going to be a fun track,” said Boutier. “I feel like the course this week is in great condition, so I don't think it's going to be playing that much different, which is kind of it's nice. Yeah, I'm really looking forward to watching or playing in the Solheim.”

EWART SHADOFF IN CONTENTION WITH GOOD FRIEND ON THE BAG

As rain plagued the latter half of her second round at the LPGA Drive On Championship, Jodi Ewart Shadoff felt a bit lucky to shoot 72, putting her in tie for first by day’s end. Ewart Shadoff had 10 straight pars through the morning until a bogey on No. 11, following it up with two birdies on Nos. 12 and 14. After double bogey on No. 15, the 32-year-old finished strong with a birdie on the final hole to finish at -5 overall.

“You know, having wind or rain is fine. I like to play in difficult weather,” said Ewart Shadoff. “But having both can be a little bit of a challenge, so I'm glad that yesterday we had the wind and today we had the rain.”

Ewart Shadoff has a buddy on the bag to get her through the rest of the weekend’s challenges – fellow Englishwoman Holly Clyburn. Clyburn, a Symetra Tour Member, signed on as a temporary caddie during the Symetra Tour’s two-week break. Ewart Shadoff’s regular caddie, Shane Codd, will meet up with her in Scotland for the next two events overseas. So far, the friendly partnership is off to a hot start.

“We’ve been practicing a lot together in Orlando and she knows my game really well and we just work really well together, and it's been good,” said Ewart Shadoff. “She's a really good green reader. I usually like just for someone to tell me, yeah, that's good, and she's really good at obviously reading the greens.”

SCHMELZEL GOES WITH THE FLOW (AND THE RAIN)

Inverness Club received more than a half inch of rain on Friday and those who competed in the afternoon sat through a 45-minute suspension of play due to the constant rain. Only nine players returned below-par rounds, with Sarah Schmelzel and Alena Sharp both shooting the rounds of the day at 3-under 69. Schmelzel, who heads to the final round tied for fourth, actually enjoyed the inclement weather.

“When we were on our way over here we were talking about how much we loved a day like this,” said Schmelzel, whose best career finish is solo sixth at the 2019 Cambia Portland Classic. “You almost throw the technique out of window and you're just trying to get the ball in the hole in as few shots as possible. So I loved it. I love days like this and looking forward to tomorrow.”

As difficult as the conditions were, Inverness Club is infamous for being tricky even on the best days. Patience and open-mindedness are key, and those traits are exactly what Schmelzel says she hopes to embody in Sunday’s final round.

“I think the course played so different yesterday from the practice rounds. It just got really firm and fast, and I think that's where I took that mentality of just one shot at a time,” said Schmelzel. “You don't know what's going to happen out here. It's a tough golf course. I think just stayed as patient as I possibly could be. This is such is difficult golf course, and you got to take what it gives you really.”

LPGA Tour rookie Yui Kawamoto returned one of the few red numbers in Saturday’s second round, carding two birdies and one bogey in her 1-under 71. The 21-year-old from Japan is tied for fourth heading into the final round, and she credits much of this week’s success to a new face on her golf bag – veteran LPGA Tour caddie Colin Cann, who caddied for some of the biggest names in the game, including major champions Annika Sorenstam, Se Ri Pak, Paula Creamer, Sung Hyun Park and In Gee Chun.

“We both met through Paula's manager, and he's a super caddie,” said Kawamoto. “He tells me what I need to do; he gives me a lot of options, which makes me really comfortable, and that really made a change in my game.”

Kawamoto made quite a splash in her LPGA Tour debut in January, finishing tied for eighth at the Gainbridge LPGA at Boca Rio. After missing the cut in both events in Australia, she returned to her home in Japan during the pandemic-related shutdown. Four months later and Kawamoto received a grand airport sendoff, with numerous media members covering her return to the United States for competition. Now, she’s heading into the final round firmly in contention for her first LPGA Tour title.

“I'm just simply very thankful and happy that I'm able to play out here again,” said Kawamoto. “I'll do the same thing: focus on my game. I'll be ready for tomorrow.”

Amy Olson thought she prepared for today’s rain at Inverness Club, but reality hit when she checked her golf bag before her second round at the Drive On Championship. Olson realized she was missing the rain cover for her bag and was about to embark on the course with a broken umbrella.

“It's been five months since looked at either of those things, and major fail starting out the day,” said Olson, who finished in a tie for sixth at -2. “I borrowed a rain cover from Sarah Burnham because she played this morning, and I had to track down a random umbrella. So I think it's a good test run for Scotland coming up, and I'll be ready then.”

Despite the day’s weather challenges, Olson is only three shots out of the lead. With rain in tomorrow’s forecast as well, the 28-year-old said she can take a lot from today’s round into the final day.

“The course conditions I think will be similar. It will just be a lot softer. I definitely kept notes on what I hit off the tees and whether that was good or if I wanted to do something different,” said Olson. “And then coming out today I was really just trying to pay attention to what the greens were doing, because yesterday they released like crazy. Today you just didn't have to plan on that. So I think tomorrow will be similar to today.”