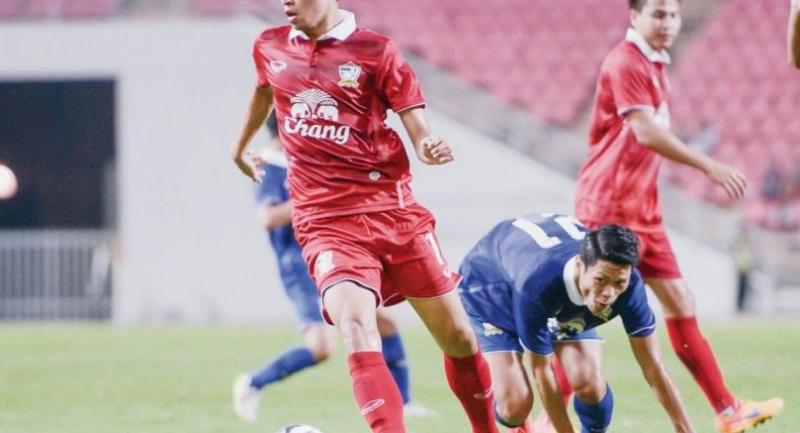 Thanaboon Kesarat, left, is a defensive midfielder for the national team. Thanaboon became the highest-paid athlete in the Thai sports industry when Muangthong United FC sold him to Chiang Rai United FC for Bt50 million.

Thanks to the allure of sports and stardom in the country, the professional agent  business is taking off, Usanee Mongkolporn writes

Sport in Thailand has never had it so good – not least because if you possess flair and are a world-class player, here’s where the big bucks lie. In the past, Thailand could count on just its talented boxers, but today the country has stars in golf, volleyball, tennis, badminton and snooker. However, it’s in football that the business of sport has really been blown out of the arena.

Talent has always commanded a price in many professions, but sport professionals are in a class of their own, as televised matches, especially live ones, can be lucrative, reaching not just a domestic audience but regional and global ones too.

And so too is the agent business. In Thailand, golf players were among the first to use agents. Others have steadily caught on as the sport business environment becomes complex, and talent undoubtedly has value if properly managed.

In a number of sports, as their popularity of Thai stars grows, the business of sport goods, licensed products, brands and live sports events can become a pot of gold!

Of course, no sport can match the size and scope of the business as football. Granted, it’s a global phenomenon – from the World Cup and European Cup to the English Premier League and Asian Cham-pions League right down to the Thai League.

Thailand has been gripped by intense football fever since 2014. The success in South Korea, where the Thais equalled their best results by finishing fourth, brought back the feel-good factor around the national team. They also showed sparkling performance in the group stage of the Asian Championship, firing the public imagination. Moreover, winning the Southeast Asian Championship (the AFF Suzuki Cup) in 2014 cemented mass passion for football in Thailand.

The popularity of Thai football is reflected in the increasing number of spectators attending football matches.

Broadcast ratings have swelled for matches played by the national football team as well as the Thai League. Royalties paid for TV broadcasting have soared. Not surprisingly, the numbers have attracted sponsors. Fan pages on social media have added to the allure of interest and passion.

Watchai Vilailuck, chairman of i-Sport, sees boundless opportunities. The company is a joint venture between Siam Sport Syndicate and Samart. It has lately expanded from the business of sport content to sport management services, and is the first Thai official sport agent for professional home-grown athletes.

He said that in the past, Thai players used their parents or family members as agents to take care of their finances because of familiarity and trust. This developed into hiring individual professionals.

Local agents for football players previously worked at a limited capacity, leaving it up to players to negotiate with team owners during transfers to foreign clubs. It differs from international agents, who are responsible for all aspects – from dealing with sponsors to conducting negotiations for a player’s publicity in promoting brands or taking part in events.

“We aim to improve the Thai sports industry to meet international standards. Nowadays, there are many famous Thai professional athletes, both at the regional and international levels, in golf, football, badminton and tennis,” said Watchai.

However, i-Sport acknowledged that the company needs to take time to convince the industry to change from the traditional pattern of Thai culture to international-standard sport management.

But i-Sport is moving fast. It recently signed a contract with Thepchaiya Un-Nooh, 32, the No 1 Thailand professional snooker player who is No 42 in the world snooker ranking.

According to the two-year contract, i-Sport would be responsible for all of Thepchaiya’s finances – from sponsorships and public appearances to arranging business schedules. This is the first time Thepchaiya had an official agent. The crucial move would help enhance his capability.

i-Sport is also negotiating with Police Tero Football Club (formerly called BEC Tero) to be an agent for the club and hence be responsible for the athletes, coach, sponsorships, licensed merchandises and other rights. The firm also wants to represent foreign players at Thai football clubs.

Using an agent at 17

Paradorn Srichaphan, a retired professional tennis player who was the first men’s singles player from Asia to be ranked in the Top 10 ATP rankings, said he used an agent when he was as young as 17.

The agent offered sponsorship for his shirts, shoes, racket and a guarantee to get a wild card to big tournaments.

When Paradorn reached the world’s 60th-70th rankings, he changed his agent to gain more rights. In fact, many agents had their eye on him. One agent even guaranteed him the highest income of US$1.5 million (Bt50.8 million) a year. He pointed out that a good feature of a sports agent is that athletes could concentrate on practising and games without being concerned about their finances, which might affect their competitiveness.

Paradorn has since joined i-Sport to offer his services to Thai professional athletes. He believes i-Sport has the potential to give these athletes added value by offering professional services including negotiating sponsorships, advertising, participation in sport events, and more.

The company also manages an athlete’s business to optimise revenues. For example, if a footballer is part of a club, he can make money from a transfer deal.

When Muangthong United FC sold Thanaboon Kesarat to Chiang Rai United FC for Bt50 million, he became the highest-paid athlete in the Thai sports industry. Thanaboon is a defensive midfielder for the national team.

Tirachai Vuttithum, president of the foundation for Thai athletes, pointed out that in the past Thai athletes had no financial management skills. Some Olympic medallists might have earned a million baht from being presenters of products or making a special event appearance. But these athletes end up with just half of the revenue because they must share the income with supporting staff, a boxing camp, for example, family members and even relatives.

The career of each athlete is relatively short, ranging 10-15 years, so the players should rely on agents in order to have sound financial management and ensure monetary security for their future, he said.

The business of agents is more advanced in developed countries.

An international sport agent starts off being responsible for procuring and negotiating employment and endorsement contracts as well as business rights for athletes. This duty then extends to covering other services, including consultancy, public relations, media management and marketing activities. Leading agents like US-based IMG, Creative Artists Agencies, Roc Nation Sports, and Octagon are also responsible for filing taxes on behalf of their athletes.

Kajorn Chearavanont, president of True Bangkok United Football Club, one of the leading Thai League clubs, agreed that athletes should have agents so clubs could also be left to concentrate on the development of their players. It is difficult for the athletes to manage their finances as they need to concentrate on their performance. The clubs also have a lot of things to do in preparing for matches and there should not be a conflict of interest over financial management of the athletes.

Kajorn said that most Thai football clubs are owned by provincial entrepreneurs or politicians. But True invested in the football club as a part of its sport marketing activities as a bridge between the businesses of True Corp and Charoen Phokphand Group.

True operates the True4U digital television channel and has obtained the rights from the Thailand Football Association to broadcast every Thai League match on television as well as True Move mobile. CP provides food for the athletes.

“The football clubs earn 90 per cent from sponsorships and the remainder from the sale of souvenirs and tickets. We don’t expect profit from the club, but create added value for True and CP,” said Kajorn.

IMG Thailand client manager Win Inthara, who oversees professional golf players in the kingdom, said that IMG represents five Thai golf players. Two of them are women – Ariya Jutanugarn, or Pro May, who recently won her sixth LPGA title in Canada and achieved the No 1 ranking in Women’s World Golf, and her elder sister Moriya Jutanugarn. The others are men – veteran Thongchai Jaidee, Kiradech Apibarnrat and Chapchai Nirat.

“Our responsibility is to manage all activities of the athletes, from seeking sponsors and having activities to generate revenue, to coordination and efficiently managing time during competitions abroad. The agent fee depends on the revenue generated and a contract between the agent and athlete. We ensure that IMG is able to find sources of income and manage clients’ finances, from investments to filing taxes. We also employ coaches, negotiate with tournament owners and even prepare suits and sportswear for athletes when they take part in events. We also help the athletes to prepare for their games,” said Win.

IMG Thailand handles only golf because Thai professional players are up in world rankings and have many sponsors.

Win commented that Thai golfers are outstanding, including the juniors, who have won a number of international tournaments.

Besides official agents, some sponsors such as Singha and Thai Beverage also act as agents. They support athletes in international competitions and of course share the cash prizes.

Golfer Ariya says her agent enables her to concentrate only on the game and prepare for competitions. The agent oversees all aspects of her business, contracts and benefits.

Sports personality Prasert Apipunya says the professional sports market has been growing since 2014 as a result of the Sports Authority of Thailand promoting football, golf, badminton, tennis, cycling, snooker, bowling, car racing, motorcycle racing, sepak takraw and basketball. The government has a budget and supports personnel development to enhance the ecosystem of professional sports.

Prasert says that official sport management agents will certainly help enhance the standards of Thai professional athletes and present them with opportunities to enter international competitions.