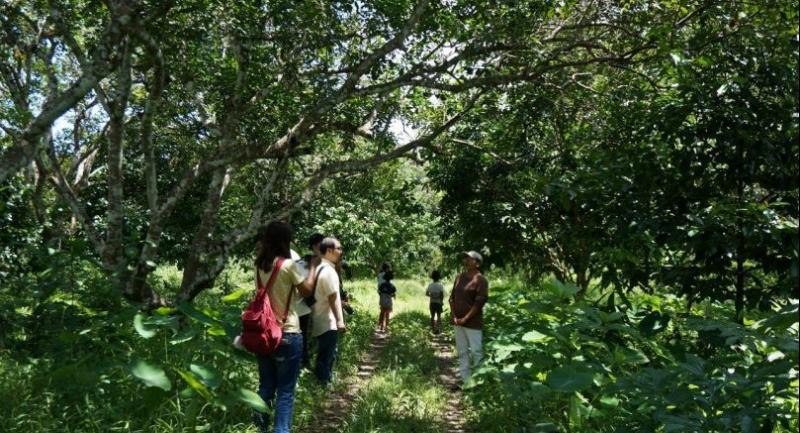 Sivaporn Iamjitkusol, far right, leads visitors to learn about her organic farming based on integrated and sustainable agricultural system in Klong Plu subdistrict of Chanthaburi.

KNOWN FOR its orchards that produce such popular fruits as durian, mangosteen, rambutan and longkong, the eastern province of Chanthaburi is working hard to showcase its potential as a culinary destination where visitors can learn about the unique local produce, savour recipes cooked up by the old generation and sample the creative twists dreamt up by younger natives.

Of course, not everyone grows fruit on this fertile land. On her 30-rai farm in Klong Plu sub-district, about 40 kilometres from Muang district, Sivaporn “Bess” Iamjitkusol practises organic farming based on an integrated and sustainable agricultural system. Garden vegetables such as coriander, long bean, cucumber, kale, chilli, holy basil and water morning glory fertilised with bio compost are among her main produce. Sivaporn Iamjitkusol, far right, leads visitors to learn about her organic farming based on integrated and sustainable agricultural system in Klong Plu sub-district of Chanthaburi.

“My farm has 10 water gates to generate water flow to the crops. Growing rambutan requires a lot of water. It means that I have to open all my water gates for about two days to provide enough water to nurture the trees. For my vegetables, I only need to open the water gates for 15-minute sessions in morning and evening,” says Sivaporn, 65.

A severe drought three years ago caused tremendous damage to fruit orchards throughout the province but Sivaporn’s farm was able to survive the crisis. Mixed crops, she stresses, help in managing risks from unpredictable weather.

The practice involves multiple cropping and keeping different types of animals such as ducks, geese and cows. Some mangosteen, longkong and rambutan trees also grow but are not the main crops. Hardwood trees like takien thong (malabar ironwood) provide shade for the mangosteens and the fruit responds to its natural umbrella with a shining and smooth skin. Visitors are also served foods prepared by the descendants of the Chong – the indigenous people of Chanthaburi.

A Bangkok native, Sivaporn worked in construction and lived in a polluted environment for several years. Her health suffered and she decided to quit her job and left the metropolis to buy this pot of land 28 years ago, following the sufficiency philosophy conceived and developed by the late King Bhumibol Adulyadej to sustain Thailand’s agricultural sector.

“I want to develop the organic products that are good for my own health and other people’s. Food should be produced with safe, quality materials, while the production process should be environmentally friendly, without the use of chemicals. I can guarantee that my products are 100-per-cent organic,” Sivaporn says.

She is happy to share her farming practices with interested visitors and also offers farm stays. She also promotes the culture of the Chong – the indigenous people of Chanthaburi – through their cuisine to anyone who visits her farm. Sivaporn can arrange a farm tour for a group of visitors (15 people up) and provide a set menu of five or six dishes prepared by Chong descendants together with fruit. The cost is a very reasonable Bt350 per person. Chong people are also found in the neighbouring provinces of Trat and Rayong and it is believed they have lived in the area since the Ayutthaya Kingdom. It is also thought they were early inhabitants of Cambodia, probably pre-dating the Khmer.

They were known as cultivators and gatherers of cardamom - the herb that is largely grown in Chanthaburi. In the past, they lived in small, remote, isolated villages that were often located in heavily forested areas. Only a handful of elderly people still speak the language that is linguistically similar to Khmer.

“There are still thousands of Chong descendants living in Chanthaburi’s three main districts of Khao Khitchakood, Pong Nam Ron and Makham as well as in Trat and Rayong. In the past, the Chong hunted animals for their antlers and tusks for merchants to export to China,” says Chong descendant Chern Panpai, the head of the Cultural Council of Chanthaburi’s Khao Khitchakood.

During the farm tour, Chern and his neighbours prepare Chong-style dishes such as coconut and shrimp paste dip and chicken curry with pumpkin and serve them with fermented rice noodles and boiled fruits like bananas and papayas, as well as shredded papaya salad.

“Herbs and vegetables are the primary foods of Chong, which is why they are healthy and live long lives. Nam prik kati (coconut and shrimp paste dip) is prepared in almost every home. The coconut cream is slowly simmered with shrimp paste until almost dry and the dip is eaten with fresh or blanched vegetables and boiled fruits. Minced pork or fish can be added,” he explains. A variety of fresh seafood and local favourite ingredients are available at Charoen Suk Market in Muang district.

The best spot to learn about local produce is Charoen Suk Market in Muang district that is open daily from 2 to 8pm. Home to more than 200 merchants, the market was renovated four years ago and took its clean market model from the Aor Tor Kor market in Bangkok. The carefully selected products are categorised into sections and range from fresh seafood, meats, herbs and vegetables to cooked-to-order food and consumer goods.

At the Lek-Khiew Seafood stall, Pairoh Pohthong gathers fresh seafood sourced from the eastern part of the Gulf of Thailand. Her wares include longtail tuna, grouper, sea bass, squid and shrimp - all selected for their freshness and large size. Next door to her is a stall run by Nongkhran Satjasai who proudly presents the tiny-shaped mollusk the locals call hoy med krasun, which literally translates as bullet-shaped mollusks. “The rounded and ribbed shell is similar to hoy khaeng (cockle) but not as strong. These mollusks live in the deep sea and can normally be fished in June. However, for five years, fishermen didn’t find any. They seem to have come back this year. The locals normally blanch them and soak for a while in fish sauce before eating them,” says Nongkhran. Kra waan (cardamom) and cha muang (garcinia cowa leaves) - the two main ingredients that Chanthaburi locals use in the curry and salad – as well as a variety of curry pastes can be found at the stall Paa Nual run by Suthida Thopsri. If you want to cook the popular local delicacy of gaeng moo cha muang (pork belly curry with sour cha muang leaves), Suthida can arrange a set of ingredients and explain how to prepare it. If you don’t want to cook but prefer to try different local favourites, look no further than the legendary restaurant Chanthorn Pochana that has been in business for nearly 60 years and was the first restaurant in the province to receive the culinary hallmark of Shell Chuan Chim. The restaurant now has two outlets in the Maharaj and Benjama Rachutit areas. Here you can find pork curry with cha muang leaves that is cooked to order or packaged in a can to take home. “We want to promote local favourites to a wider group of people and also use local fruits in both savoury and sweet menus. Our restaurant brings together many food products from different communities in the province to promote local wisdom,” says Noztagon Vananan, the manager of the Benjama Rachutit branch. “Chanthaburi foods normally have sweet taste and make use of herbs such as cardamom and black pepper. They are partly influenced by Chinese and Vietnamese cuisine. We want to reinterpret the local delicacies like pad thai sen chan, moo liang (braised pork in herbal broth) and rice slightly stir-fried with fleur de sel – the salt that is largely available in the province,” says 30-year-old Peeranat L Lorrasamee who also operates the Garage Cafe in Muang district. He worked with 23-year-old female chef Nisayanun Pinkachan to present the local cuisine in a contemporary style while maintaining the authentic tastes.

The first course was moo liang served with Chinese-style, boiled sticky rice shaped into triangles and drizzled with brown sugar and chilled mangosteen in syrup. Chanthaburi-style stir-fried noodles with crab were served with a forgotten part of pork called lai lee – a chewy cut from the diaphragm – that was grilled and seasoned with cha muang sauce, together with durian-flavoured kanom jak. Kanom jak is made from ground coconut mixed with sticky rice flour, coconut cream and palm sugar and poured into long nipa leaf lengths, then grilled over a charcoal fire. The large hoy takom were served fresh and seasoned with Chanthaburi-style seafood sauce while the patong ko (deep-fried dough sticks) were lightly seasoned with sour-and-sweet clear sauce and served with mango sorbet. “The theme was a one-day trip in Chanthaburi through a culinary journey. Diners today are increasingly interested in locally grown produce, artisanal and hand-crafted food and Chanthaburi has potential to match this food trend. I’m going to launch chef table-style dining called ‘One Night: One Table’ in the next two months at my own place for about 15 people at a time. So far, 20 groups have already booked,” says Nisayanun who trained at the Frog Hoxton restaurant in London.

The writer travelled as a guest of Tourism Authority of Thailand’s Chanthaburi Office.