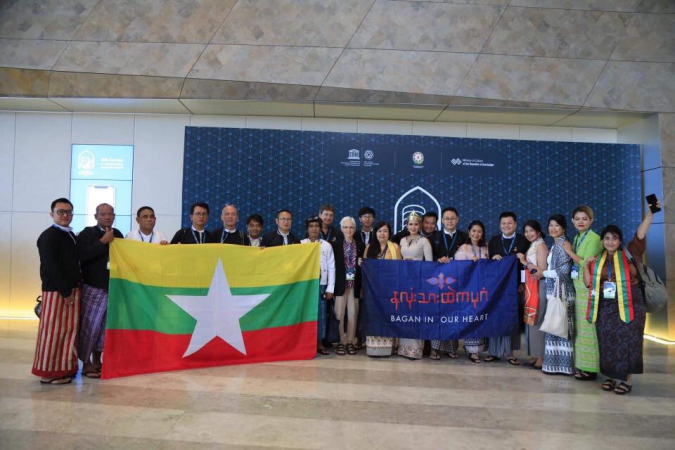 Myanmar’s efforts to attract more Western tourists could soon be realised after its ancient capital Bagan was inscribed as a World Heritage Site on Saturday evening, according to officials and delegates at the 43rd session of the United Nations Educational, Scientific and Cultural Organisation (Unesco)’s World Heritage Committee meeting, which is taking place in Baku of Azerbaijan.

Lying on a bend of the Ayeyarwady River in the central plains of Myanmar, Bagan is home to nearly 3,600 ancient monuments, featuring an exceptional range of Buddhist art and architecture. The site’s eight components include numerous temples, stupas, monasteries and places of pilgrimage, as well as archaeological remains, frescoes and sculptures. The property bears spectacular testimony to the peak of Bagan civilisation from the 11th to 13th centuries, according to Unesco.

Speaking from Baku, Ohnmar Myo, international coordinator at the Department of Archaeology and National Museum, told The Nation that Bagan was selected as a World Heritage Site under three selection criteria: bearing a unique testimony to a cultural tradition or to a civilisation; being an outstanding example of architectural or technological ensemble in human history; and being an exceptional example of living Buddhist beliefs and tradition of merit-making.

“We feel extremely proud for this inscription, and are committed to working harder for the sustainability of Bagan, our genuine treasure,” she said.

Ambassador Kyaw Zeya, head of the Myanmar delegation, said Myanmar is now celebrating the joyous moment of the successful inscription of Bagan on the World Heritage list.

“It is a proud moment not just for us, but for all of you to be part of this inscription process,” he said.

“We will continue our efforts on the conservation and management of Bagan so that this treasure heritage will remain for thousands of years as a heritage of humanity.”

The official lauded the efforts and collaboration of many stakeholders -- government officials, intellectuals, local and foreign experts, development partners, the private sector, volunteer groups including Bagan in Our Hearts, and local communities during the long journey of inscription process.

Kyaw Zeya said the whole nation was delighted to witness Bagan as the second World Heritage Site in Myanmar. Three of Myanmar’s Pyu cities -- Halin, Beikthano and Sri Ksetra -- have been inscribed on the World Heritage list since June 2014.

“Bagan is a living heritage, having endured all forms of challenges for more than a thousand years,” he said.

“Until recently, some countries had negative views on Myanmar due to some news coverage on international media. We now get a chance to prove that Myanmar is really worth a visit,” she said.

“This inscription is truly a dream for us over the decades. Now, our dream has come true. But, it is just the very first step and we still have a long way to go.”

In a bid to explain to delegates from other nations about the real truth of the latest developments in Myanmar, MTGA chose her as the organisation’s representative to be present at the high-level meeting in Azerbaijan’s capital. With her proficiency in French and English, Aye Nyein Thu said she could help promote the country and had fruitful discussions with delegates from Islamic countries in the Middle East and Africa.

She said nearly 40 delegates from Myanmar are attending the meeting, and more than half of them are volunteers who cannot wait to see Bagan as a world heritage.

“Before the official announcement, we were worried about what some European countries, particularly Norway, Hungary and Spain, would comment on this nomination [for Bagan]. Today, we were fortunate enough to witness that all of them amicably agreed that Bagan deserved it,” she said.

“Here, we had a chance to learn about management plans from international experts, and ICOMOS [the International Council on Monuments and Sites] also provided 20-point recommendations to ensure sustainability of Bagan. Now, it is our responsibility to conserve this living cultural site.”

Speaking from Nay Pyi Taw, Arkar Kyaw, deputy director at the Ministry of Religious Affairs and Culture, told The Nation that Unesco has finally recognised the importance of Bagan, referring to Myanmar’s efforts to nominate Bagan for inclusion on the World Heritage list since 1996, which were plagued by controversies over some renovations.

“This inscription means Bagan, as a World Heritage, will be protected not only by our government but also by the whole world,” he said.

“With the financial and technical support of Unesco and international partners, we will concentrate on the conservation of our ancient monuments from now on.”

Arkar Kyaw foresees a promising future for Myanmar’s tourism industry as well as for local communities.

“This will lead to better socio-economic conditions for locals living in the Bagan archaeological zone and nearby villages, as there will be new jobs and opportunities for them,” he said.

He said the authorities would also make efforts to nominate Myauk-U in the conflict-torn Rakhine state for inclusion on the World Heritage list.

“This inscription encourages us to try harder to sustain our historical blessings. The more support we get from the international community, the more we come up with outstanding management plans for our invaluable heritage sites,” he said.

Thant Myint-U, a historian and founder of Yangon Heritage Trust (YHT), considered the inscription as a boost to the proper conservation of the sublimely beautiful and historically important site as well as a barrier for those who would prioritise tourist dollars above all.

According to YHT, the inscription could largely contribute to the management and conservation of Bagan’s invaluable heritage.