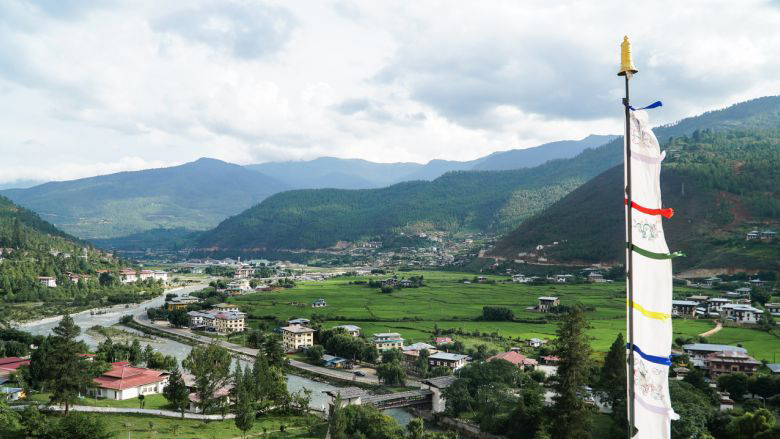 By The Strait Times/Asia News Network

BHUTAN - Dzongs top the itinerary in most cities on Bhutan's burgeoning tourist circuit, and for good reason too.

They are dramatic structures - former military fortresses with towering walls that encircle a network of temples, monks' living quarters and government offices today. Monks and civil servants cross the same courtyards; elaborate murals adorn walls and doorways and there are floor-to-ceiling prayer wheels.

Built in 1637, Punakha Dzong in the valley town of Punakha rises impressively from the banks of the Pho Chu and Mo Chu rivers.

Paro Dzong, dubbed "fortress of a heap of jewels", offers panoramic views of Paro township. And Tashichho Dzong, located in the capital Thimphu, has been the seat of Bhutan's government since 1952.

But there is more to Bhutan, I learn, during a seven-day tour with home-grown company Druk Asia, which specialises in tours to a country that topped Lonely Planet's list of best places to visit next year.

In Thimphu, we visit The Craft Gallery by Gyalyum Charitable Trust, a two-storey craft shop that sells accessories, scarves and bags made by vulnerable women, such as survivors of domestic violence and sexual abuse.

I have encountered many similar initiatives while travelling around South-east Asia. But I did not expect to find the same thing in Bhutan, often touted as the world's happiest kingdom.

There is trouble in paradise too. Executive director Tshering Uden Penjor knows this. She is proud of Bhutan's unique culture, yet realistic about the work that needs to be done.

"Although Bhutan is a matrilineal society, a lot of women accept domestic violence because they are reliant on their spouses or believe that is just the way things are. We want to help the women who do not complain," she says.

Weaving is an important part of the country's heritage and the academy's goal is to collect, document, preserve and display the national art form. 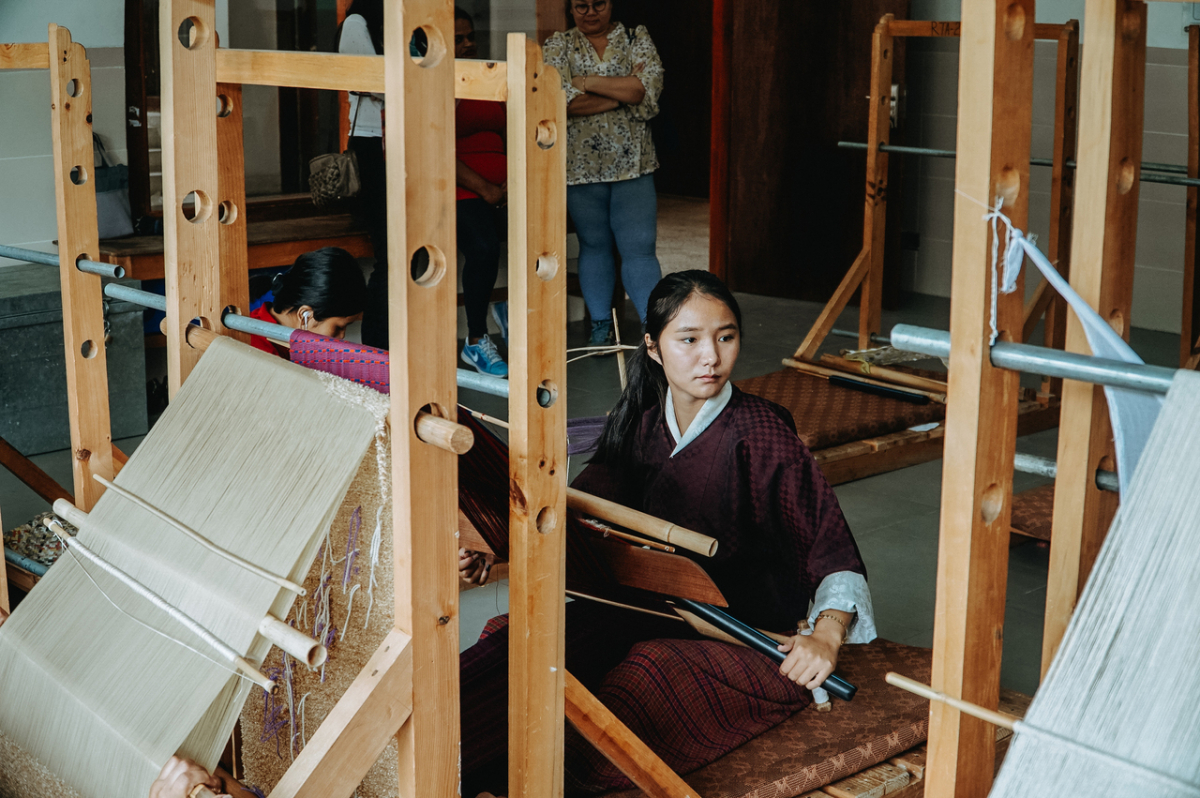 Hand-woven textiles are used to make the traditional Bhutanese dress. Women wear the kira, a large piece of fabric tightly wrapped around the waist or chest and topped with a short jacket, while men wear the gho, a knee-length robe fastened at the waist by a cloth sash.

We wander along walls of richly coloured tapestries, adorned with symbols such as the eternal knot, which represents the importance of Buddhism in Bhutan.

Then we head downstairs to visit classrooms of girls taking a summer weaving course, their headphones plugged in and tapping away at smartphones while weaving at looms.

THE FAULT IN OUR STARS

In Bhutan, astrology is so well-regarded that locals consult the stars before making major life decisions such as getting married, changing jobs or buying a car.

I am no believer in horoscopes, but keep an open mind during my reading at Pari Zampa Lhakhang, a temple and astrology school where about 100 monks study. They will take at least a decade to graduate and then serve at monasteries in various districts.

Mr Sangay Lhendup, 32, who spent 15 years as a student and now teaches at the school, uses my birth year to read the charts and discerns that my lucky colours are white, orange and yellow, my lucky number is one and that I was a goddess in my previous life.

If the reading appears arbitrary, it is also grounded in common sense. I am told to avoid polluted areas in my old age and to avoid killing animals.

I think guiltily about the mosquitoes I have swatted over the years - very un-goddess-like.

Locals, in contrast, take a much gentler approach. When flying ants swarm my bedroom at a lodge in Gangtey, a Bhutanese girl gathers them by hand and tosses them out the door. 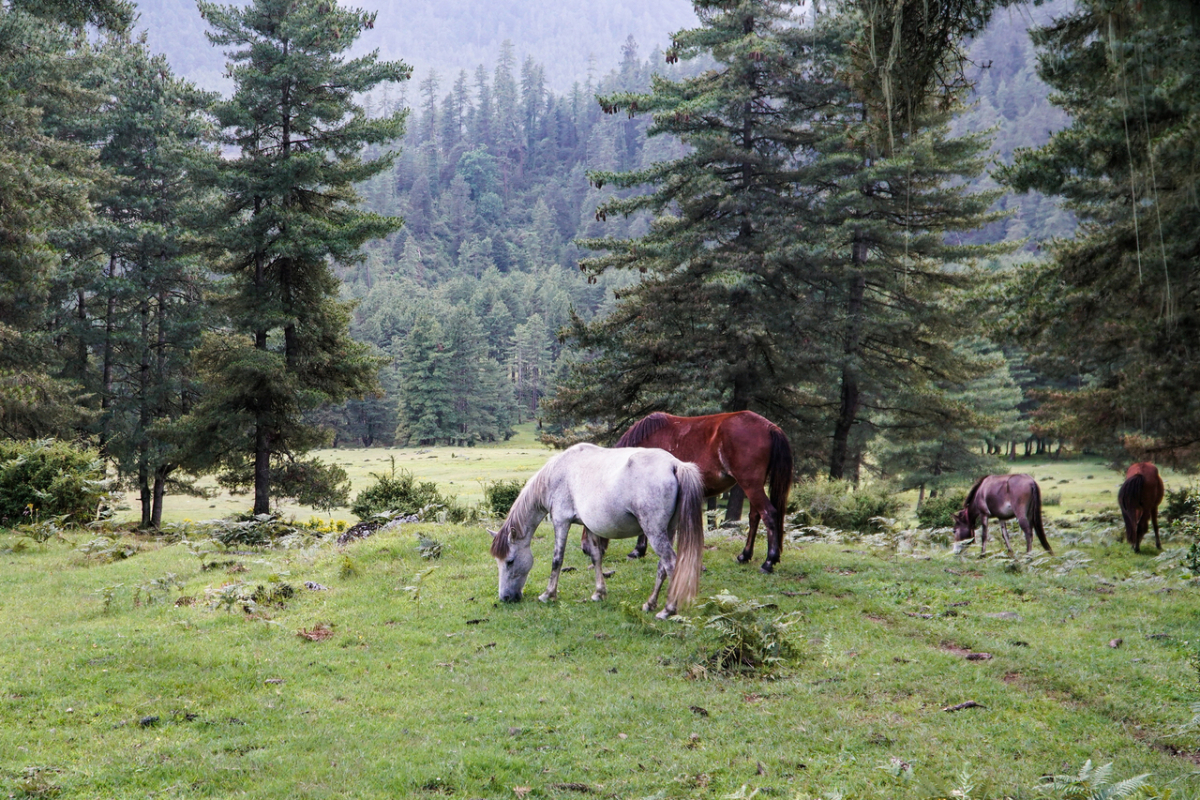 And while driving along winding mountain roads - punctuated by painted signs that exhort "No hurry, no worry" - our driver does not honk at passing cows, but slows down to let the animals cross.

Life is unhurried in Bhutan. There is time to indulge in long baths where the water, infused with artemisia, mint and marijuana leaves to soothe tired muscles, is warmed by river stones that have been heated over a wood fire until they glow like embers.

I experience this at the Aum Choden farmhouse in Paro, a delightfully rustic homestay run by Mr Yeshi Tashi Gocha, 31. We are here only for the afternoon, but guests can spend the night at the two-storey building run by Mr Yeshi, his wife and brothers.

In the backyard, wooden tubs are housed in a row of cubicle-like sheds. Knock on a privacy panel and someone will drop a stone into a partitioned section of your tub, so hot that the water sizzles and steams. I hear the strumming of a guitar and soak in strains of a lilting Bhutanese tune.

Mr Yeshi says Bhutanese take baths like these about eight times a month. In summer, it is healing after a trek. In winter, it warms the body and soul.

So popular is this pastime that luxury lodge Six Senses Thimphu includes an upscale version as part of its spa offerings. The international luxury chain opened its first three properties in Thimphu, Punakha and Paro this March. 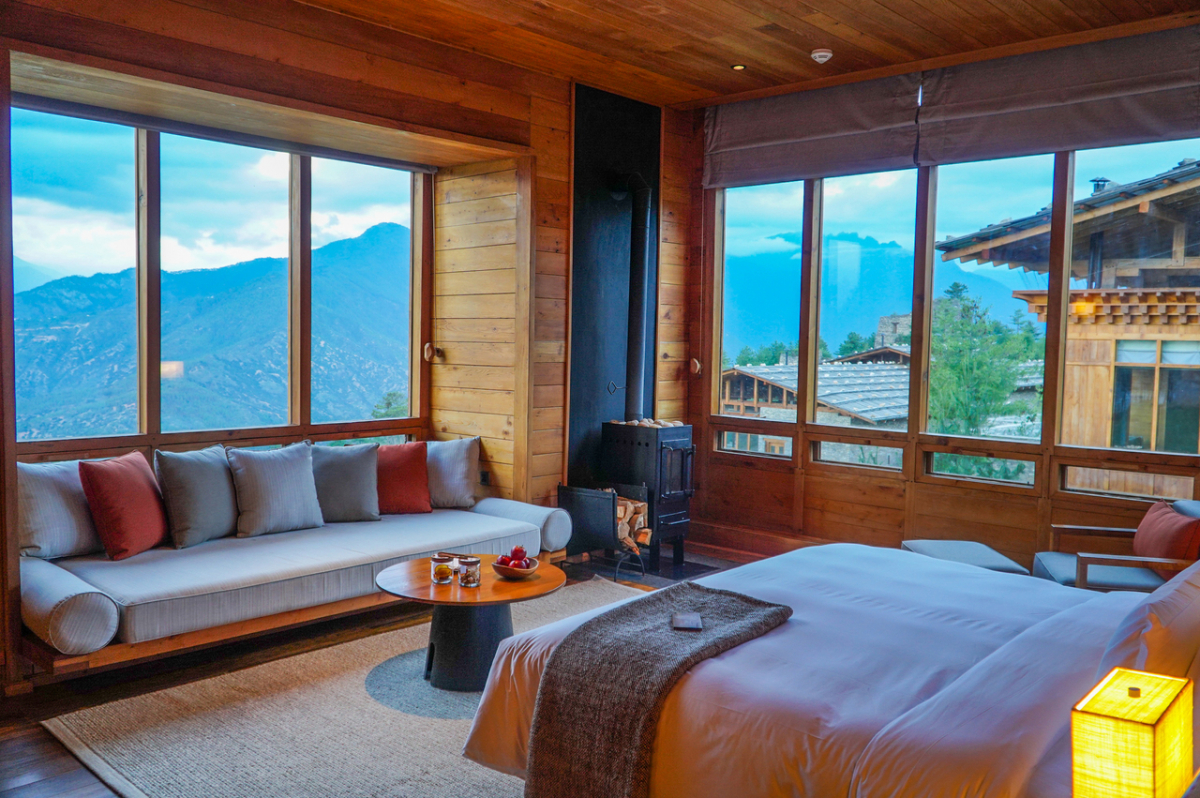 Six Senses chefs adapt local specialities such as ema datshi, a cheese and chilli stew that is Bhutan's most iconic dish. Here, chilli is a vegetable, not a condiment.

Chefs have toned down the heat for international palates, but spice-lovers who want to sample the original version can sign up for a cooking class at Gangtey's ABC Lodge, which employs youth from the surrounding villages. 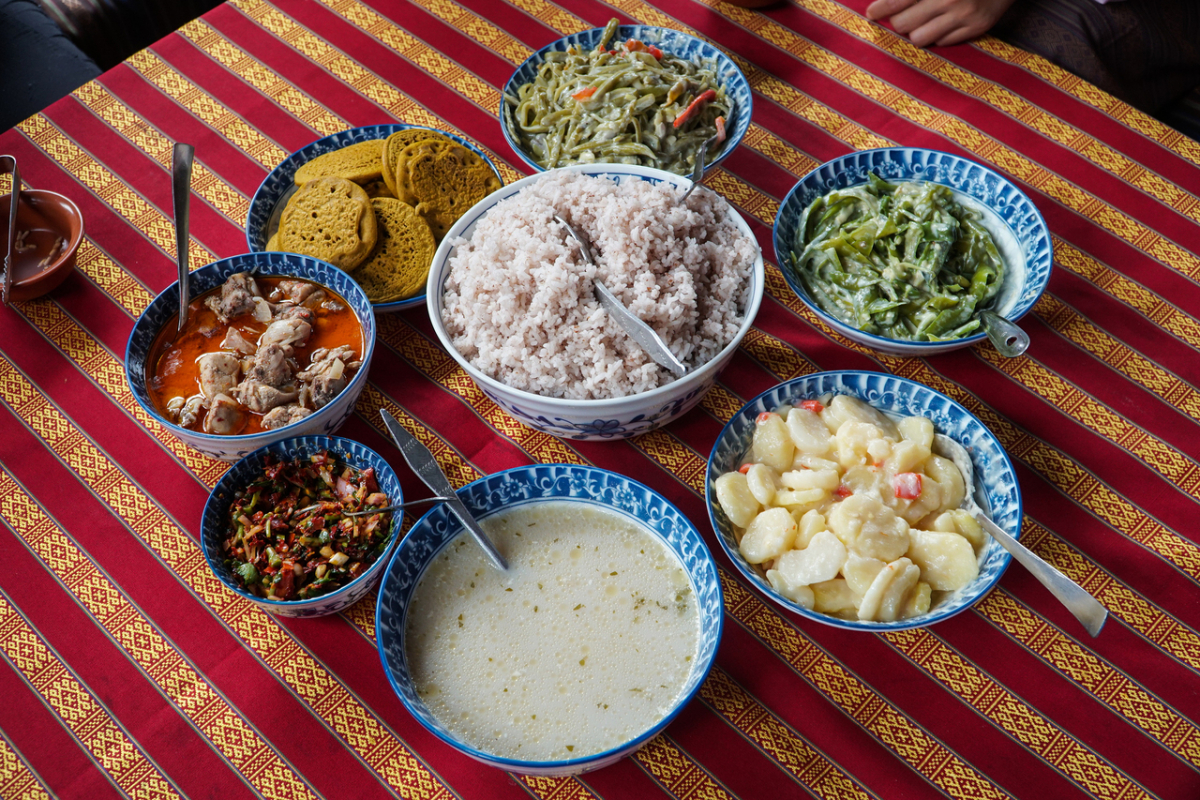 Here, we crumble a mixture of cottage and processed cheese, mixing it by hand as the staff add onions, garlic and tomatoes to temper the heat. A sprinkle of peppercorns lends a buzzy, mildly numbing sensation to the dish, like the mala stir-fries so popular in Singapore.

MONASTERY IN THE CLOUDS

Should you feel the need to burn off all the food, there are opportunities aplenty.

In Gangtey, we trek through the scenic Phobjikha Valley where cows amble through yellow-speckled meadows and horses graze beneath pine trees. 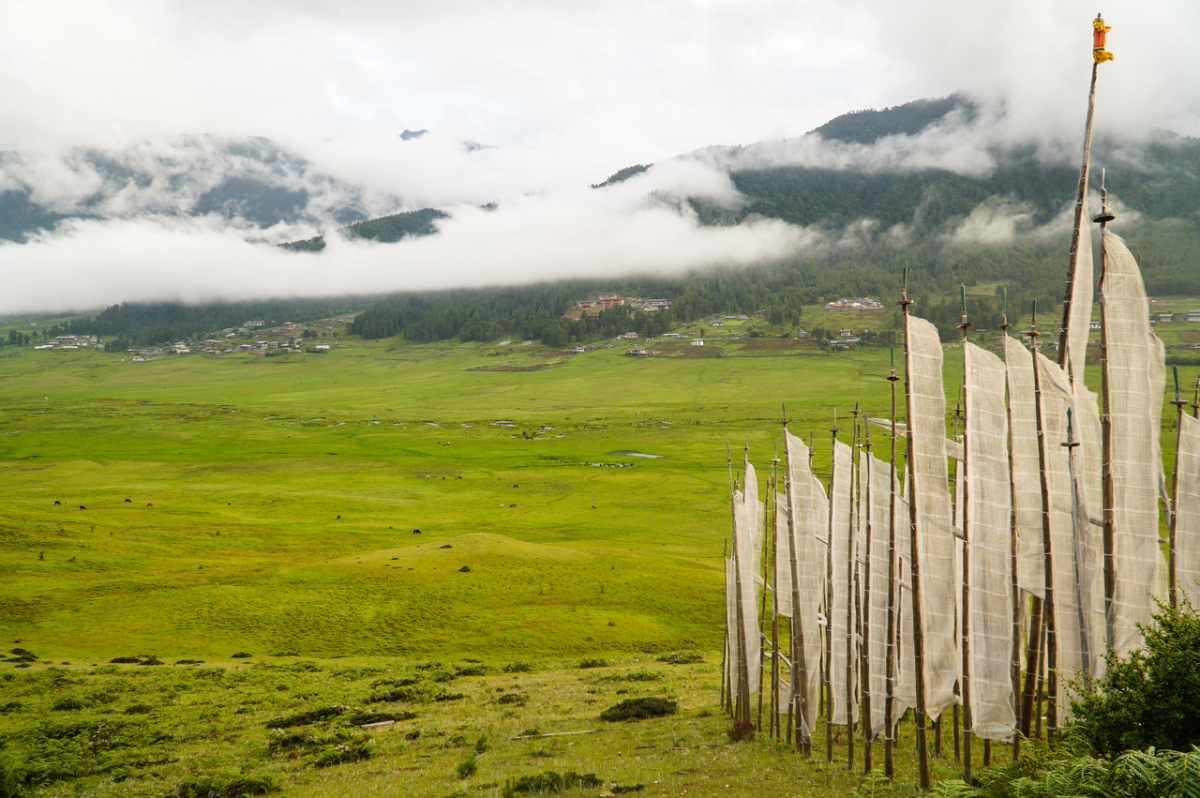 After about an hour, we emerge atop a knoll, where the clouds hang heavy and low, almost close enough to touch. Between November and February, the valley teems with endangered black-necked cranes prized because they symbolise longevity, prosperity and peace.

It is July when I visit, so we take a short drive to the black-necked crane information centre, which houses a solitary bird, year round. Karma, found in 2016 with an injured left wing, is healthy but unable to fly, regards us with cool curiosity from its cage.

There are many temples in Bhutan, but none so majestic as the iconic Tiger's Nest Monastery. Built on a cliff near the town of Paro, in western Bhutan, the temple looms dramatically from the clouds. 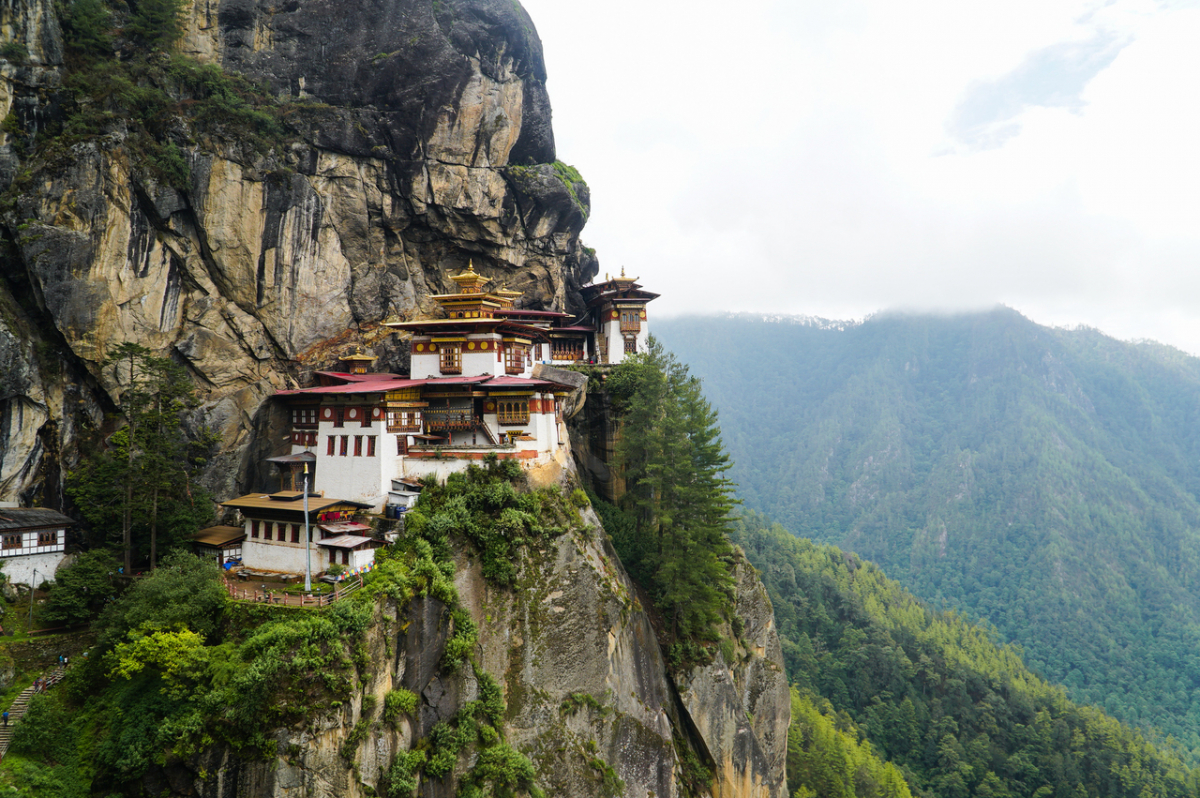 It is like the Eiffel Tower in Paris or Tower Bridge in London - the classic postcard shot everyone associates with the country.

But getting to the temple is not so easy. The way up is a two- to four-hour trek, depending on your fitness level. The thinning air, at 2,800m above sea level, compounds the challenge.

Still, almost every visitor attempts this route, climbing alongside locals who ascend to pay their respects at what is believed to be Bhutan's holiest site.

According to folklore, revered figure Guru Rinpoche, who is recognised for bringing Buddhism to Bhutan, flew to the site on the back of a tiger and subdued the evil spirits in the region. Today, locals believe that all prayers they make at the monastery will be answered.

At the end of a lung-busting climb, we finally make it to the monastery, which houses a maze of caves and temples. Each one tells a different story - for instance, my guide points out a cave where Guru Rinpoche is said to have meditated for three months.

Around me, devotees pause to receive holy water blessings from monks or light offerings of butter lamps. But dwarfed by the mountains, I am content to sit in silence.

I have no prayers, only gratitude.

I took a five-hour flight to Paro on Drukair, which included a 40-minute stopover in Guwahati, India. Passengers headed for Bhutan do not have to disembark. In December this year and next year, Drukair will increase the frequency of Singapore-Bhutan flights from twice to thrice a week.

• Daily minimum tariffs, which include guide and transport fees, entrance fees to tourist attractions, all meals and lodging at three-star accommodation, apply to tourists. It costs US$250 (S$340) a night during peak season (March to May and September to November) and US$200 a night during off-peak season.

• For those seeking far-flung adventures, the time to visit is now. Bhutan's focus on high-value, low-impact tourism means top attractions are not yet overcrowded. But tourist arrivals to the landlocked Himalayan nation have grown exponentially in the past decade. Close to 275,000 people visited Bhutan last year, compared with about 110,000 in 2012. Go before more tourist buses jam the roads.

• Pack layers as the weather can vary drastically depending on time of day, as well as between cities of different elevation. During my trip in July, temperatures dropped to single digits at night in Gangtey, while afternoons in the lower-lying Punakha were warm enough for just a T-shirt.