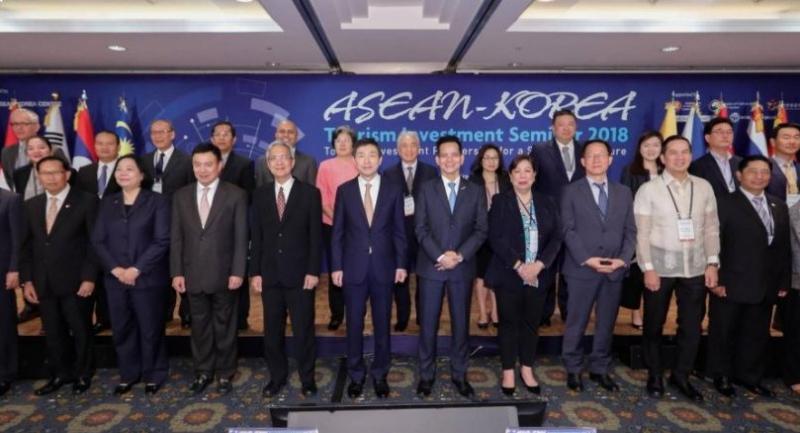 COUNTRIES in the Asean region are gearing up to exploit the economic gains from a projected surge in the ranks of foreign tourists from 120 million last year to just shy of 200 million in 2030.

“We need investors to expand their outlays to develop Asean's infrastructure and the range of tourism projects required to support the rise in the number of visitors to the region," Rashidi Hasbullah, secretary general of Malaysia’s Ministry of Tourism and Culture, said at the Asean-Korea Tourism Investment Seminar 2018 in Seoul yesterday. He said that efforts to attract tourism investments form part of the key strategic actions outlined in the Asean Tourism Strategic Plan 2016-2025. The Asean tourism ministers at the gathering in the South Korean capital reaffirmed that “driving investments in infrastructure to keep pace with tourism growth” is one of the main priorities for this year.

The member states of the regional bloc have forward-looking plans to attract investors in strategic tourism sub-sectors of interest to individual countries, Hasbullah said.

The region's increased infrastructure investment will have significant multiplier effects on consumption in the future through increased employment, higher incomes and corporate earnings, he said.

“If we look at the demographics, Asean has a combined population of 634 million people where 65 per cent of the population will be classified as middle income by 2030, compare to a mere 29 per cent in 2010,” he said. “This growing number translates into spending power that enables growth in consumption demand.”

Thailand's permanent secretary of the Tourism and Sports Ministry, Pongpanu Svetarundra, told participants at the seminar of the government’s policy to develop infrastructure projects in the country’s Eastern Economic Corridor (EEC), which covers the provinces of Chon Buri, Chachoengsao and Rayong. The targeted projects are worth Bt1.5 trillion under a spending programme to 2022. The investment outlays form a key part of the government’s efforts to boost the economy and support growth in tourism businesses, Pongpanu said. "Thailand welcomed 35 million foreign tourists last year and that number is expected to be 38 million this year, before rising to 60 million in 2030.

“We need more investment to develop the country's infrastructure to support the strong demand in the future. The opportunities are open to the private sector in both the domestic and overseas markets to expand the investment in our country.”

Pongpanu estimates that the number of tourists to visit the Asean region will increase from 120 million last year to 198.57 million in 2030, based on the average growth rate of 4 per cent a year from now.

Laos' director of the tourism planning and development division of the Tourism Development Ministry of Information, Culture and Tourism, Somxay Sipaseuth, said that the country had succeeded in attracting more investment to develop the country's infrastructure projects to serve the growing number or tourists. At the end of last year, the country recorded 3.86 million foreign tourists and they brought in revenue of US$648.06 million.

Cambodia's deputy director general of international cooperation and tourism investment under the Ministry of Tourism, Rothasak Thong, said the number of foreign tourists to the country last year rose 12 per cent from 2016 to 5.6 million. Cambodia expects tourist arrivals to jump to 13 million in 2028.

More investment in infrastructure would be required to manage this growth in tourism, Rothasak Thong said. He pointed to the country’s aggressive investment to develop new airports for Siem Reap and Phnom Penh and an expressway from Phnom Penh to the coastal resort of Sihanoukville. The projects are supported by investment from the Chinese government.

“We also open to investment from other sources, including South Korea, to develop our country's infrastructure projects," he said.

Myanmar's deputy director general of directorate of hotels under the Tourism Ministry of Hotels and Tourism, Khin Than Win, said Myanmar's government provides tax holidays for foreign investors of between three and seven years, depending on the location of their investments.

The incentives are part of the country’s efforts to encourage foreigners to expand their investments and develop the country's infrastructure in line with the rising number of tourists.

Representatives from Indonesia, Singapore, Vietnam and the Philippines also presented their incentives for foreign investors in the infrastructure and tourism sectors.