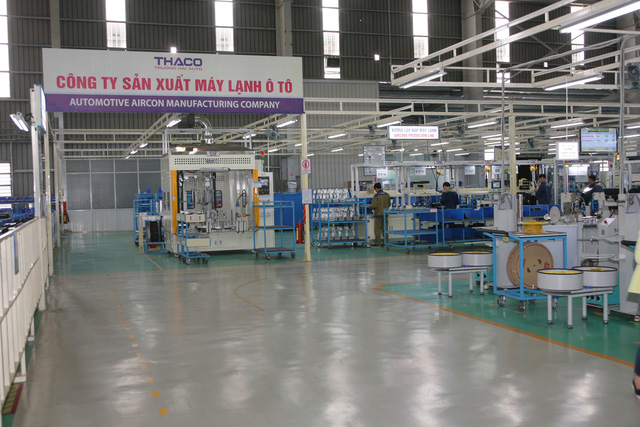 The development of the domestic auto industry offers several opportunities for Vietnam’s industrial market, according to the consulting firm CBRE Vietnam.

The automotive industry in the country is still underdeveloped in terms of manufacturing compared to other Asean countries, but the accumulation of industrial land banks for this industry has been increasing.

Le Hieu, CBRE Vietnam’s director of Office, Industrial and Logistics Services, said big players in the market are planning to build enormous automotive manufacturing hubs, among them THACO with the Chu Lai–Truong Hai Complex in Quang Nam Province and VinFast with its automotive complex in Hai Phong City.

Furthermore, well-known foreign car assemblers including Toyota, Mitsubishi and Mercedes-Benz have been releasing their own expansion plans. The expansion is strongly supported by the rapid improvement of expressway networks and deep-sea ports connecting industrial and logistics hubs, he said.

Thailand and the US, the two automotive giants of each respective continent, saw growth in their industrial real estate markets thanks to the concentration of automotive makers and suppliers in specific geographical locations. High occupancy and rising rental rates challenge the expansion of manufacturing and create a demand shift to emerging markets, according to CBRE Viet Nam.

"We are also seeing the same trends in Vietnam when traditional industrial markets in the northern and southern areas are maturing with limited land banks and very high rents," said Hieu.

However, this could also be an opportunity for real estate developers to note the increasing demand for production expansion amid the current limited supply. At the same time, each region has distinct competitive advantages based on the difference in nature of business and production as well as land availability, he said.

The Vietnamese automobile industry still has much to do to reach a golden period and compete with regional rivals.

In Vietnam, the manufacturing shift from mainland China, recent rapid changes in domestic regulations and international trade agreements have had a significant impact on the industrial market. From the real estate perspective, the most important aspect for market shift and macroeconomic conditions is the increased industrial land demand serving expansion of industrial production.

The role of policy-makers is considered vital, but the industry needs more than that to thrive, CBRE said. In this context, industrial real estate developers can seize opportunities generated by the growth by offering not only land bank and storage space but also integrated industrial and logistics infrastructure specialised in automotive manufacturing to car makers and suppliers.

Dang Thanh Son, senior adviser of Baker McKenzie Law Firm, said current policies are not stable and that much work remained to be done, as such policies have been shown to greatly attract foreign investors to Vietnam.

Truong Minh Hanh, marketing director of the Vietnam-Singapore Industrial Park in Bac Ninh Province, said hundreds of companies have invested in the industrial sector. However, their biggest challenge is to find places for production as well as areas to house workers, especially skilled workers, he said.

Hanh said the State should not have too many incentives but should tighten policies to manage the industry more effectively.