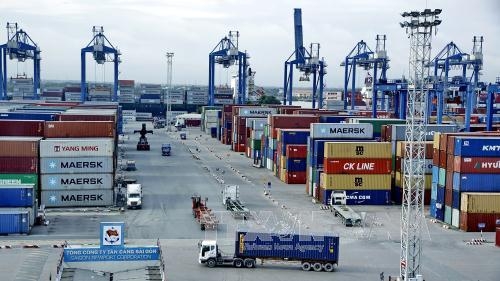 HCM City is developing a strategy to become a logistics hub, focusing on connections to other provinces in southern Viet Nam. - VNA Photo The Anh

HCM City is working on a logistics development strategy that would make the city a major logistics hub and reduce logistic costs to 16 per cent of Vietnam’s GDP in 2025.

During a conference held early this week in HCM City, Nguyen Ngoc Hoa, deputy director of the city's Department of Industry and Trade, said the department and the Viet Nam Logistics Research and Development Institute (VLI) had been told by the city to work on a logistics development project to 2030.

The project will focus on building three logistic centres through technical infrastructure, and will aim to increase the number of businesses hiring specialised logistic services, with the goal of reducing costs.

In addition, the project will consider locations and the scales of logistic centres, as well as improve logistic service quality.

To continue as the economic leader of the country, HCM City should have a well-developed logistics industry connected to other provinces, particularly since many of the city's major exporting industries are moving away from HCM to other provinces, experts said.

To Thi Hang of the VLI said that southern Vietnam has 12 inland container depots, with newer and bigger ones offering more comprehensive logistic service packages. Such depots are also linked to domestic waterways and located near seaports.

HCM City has six depots, but five of them, which have been operating over the intended capacity, are planning to relocate.

In addition, many of Vietnam’s logistic businesses rely on contracts from foreign companies, as well as from big businesses.

A survey done by the institute showed that most of the city's port clusters were facing difficulties such as congestion, unhealthy competition, poor connection between small ports, and the inability to expand due to locations in urban areas.

About 41 per cent of the surveyed businesses said that Thu Duc District and District 9 are the best places for a logistic centre, due to convenient traffic and future airport and port development.

During the conference, several businesses said that a comprehensive logistic development project was crucial for ensuring sustainable growth and avoiding a situation where developments occur independently of each other.

Inland container depots, along with good storage spaces and clearance systems, are important for a logistics centre, they said, adding that current depots in the city lack traffic connections within the city and to other provinces.

HCM City is the biggest consumer market in the country, and the largest distribution and supply centre in the country’s south. Most of the imports and exports from southern provinces and trade between provinces go through HCM City.

The city, which is also located near major South China Sea (called the East Sea in Vietnam) shipping routes, can use multiple methods of goods delivery due to a favourable landscape, according to the department.

The logistics project will be submitted to the city government for approval in December.