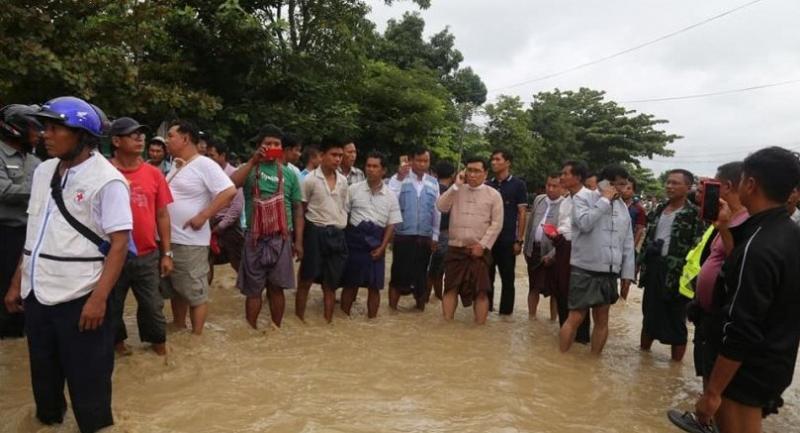 More than 63,000 people in south-central Myanmar’s Bago region were forced to evacuate their homes in 85 villages on Wednesday as water cascaded from a collapsed spillway in the Swa Chaung Dam.

Fatalities have been reported, but the number remains in question.

Win Myat Aye, Union Minister for Social Welfare, Relief and Resettlement, told The Nation on Thursday that the situation was under control in the flooded townships of Swa and Yedashe.

“Things are going really well with our relief and resettlement efforts,” he said. “Repairs to Swa Chaung Bridge and the dam spillway are nearly complete. Normal movement has resumed on the Yangon-Mandalay Expressway.

“We managed a smooth evacuation of flood victims to emergency camps in Taungoo district, giving them food and shelter in cooperation with regional authorities and different organisations.”

Myat Aye said 63,421 people were affected and there were “some casualties” that still needed to be verified.

“We cannot say yet exactly how many people died. We’ve had reports that some people are missing and we are urgently searching for those people,” he said.

He believes there were no more than 10 fatalities, noting that two people reported missing were found alive on Wednesday evening.

Built in 2004, the Swa Chaung Dam mainly holds water from Swa Creek. Its capacity is 216,350 acre-feet. The water is channelled to irrigate more than 20,000 acres of farmland, according to the Ministry of Agriculture, Livestock and Irrigation.

Kyaw Lin, deputy minister for construction, said skilled ministry engineers worked through the night to repair the bridge and he was confident that all necessary repairs would be completed within 24 hours of the accident.

Police Colonel Aung Ko Oo of Myanmar Traffic Police said all types of vehicles were using the bridge again on Thursday. It was reopened at about 3.30pm Wednesday following more than nine hours of repair work, he said.

“All transportation has returned to normal and repairs are underway on the old highway and things will be normal there again very soon,” he said.

Aung Kyaw Min, director of military-backed Shwe Man Thu Highway Express, said the company had no need to cancel any bus trips to Central and Upper Myanmar using the expressway.

“Yesterday there were only a few passengers on all the routes because people dared not go there. We refunded their ticket money and subsidised the fares of those who wanted to ride with us as planned,” he said.

Kyaw Soe Lin, an assistant general manager of Myanma Railways, said no trains were running to Central or Upper Myanmar except on the Yangon-Taungoo and Mandalay-Pyinmana routes because infrastructure including track foundations had been damaged, particularly in Yedashe Township.

He said the other routes would remain closed until Friday.

“We don’t need to worry about further flooding now that it’s stopped raining cats and dogs,” he said.