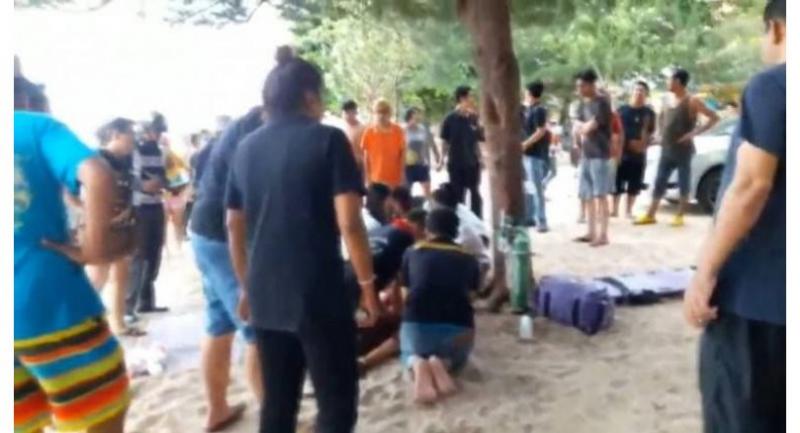 A woman was killed and her male companion injured by a lightning strike at Cha-Am beach in Petchaburi on Wednesday.

Police said they believed that both people were on their mobile phones, which could have been a factor in them being struck.

CCTV footage showed a flash and the two, who were sitting on a mat under a pine tree, were knocked over unconscious.

The 27-year-old woman, later identified as Supranee Khuenkankong, was found lying unconscious with burns to the right of her head and blood coming from her nose, mouth and ear. The unidentified man, who appeared to be in his 30s, was in a dazed state with burns on his left leg.

Local police officers, medics and local residents rushed the two to Cha-Am hospital but Supranee died on the way. While there is an ongoing debate on whether it is safe to use mobile phones during  lightning storms, the Public Health Ministry has suggested that people should not do so.

Mobile phones, public phones and agricultural tools include components such as metal plates, aerials and batteries that could potentially attract electricity, the Ministry statement said.

Last year, lightning strikes injured 18 people, six of whom were killed. Half of the injured were children with 22 per cent being farmers, according to statistics gathered from nine hospitals.

Fifty-six per cent of lightning strikes occurred in open farm fields, with 28 per cent at roads and 6 per cent at houses.